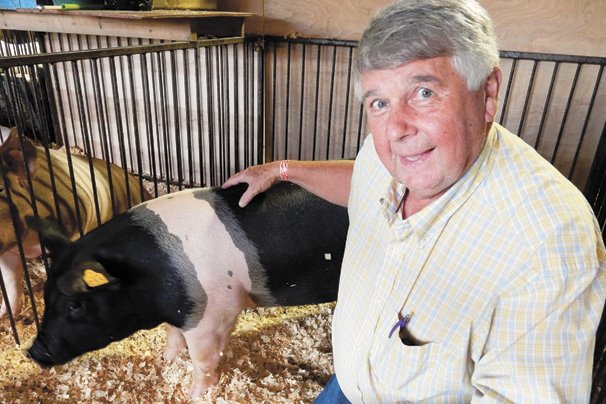 Dave Runyan served in the swine barn at the Ohio State Fair for 51 years.

Five decades of service in the swine barn

Each year during the 12-day Ohio State Fair, the O’Neill Swine Barn hosts two breeding shows and then the large market event where the facility is filled to capacity, culminating with the final drive. During that time the staff handles the needs for accommodating around 3,500 hogs, hundreds of exhibitors, twice as many parents, countless spectators, and dozens of sale buyers. The intricate ebb and flow of the Ohio State Fair swine barn appears to run like clockwork to the casual observer, but behind the scenes is a dedicated top-notch staff that, for more than a half century, has included Dave Runyan.

After 51 years of working in the swine barn at the Ohio State Fair, longtime Swine Superintendent Runyan has officially stepped down from his position as leader of the barn following the 2014 Ohio State Fair in order to hand the reins over to a new generation of leadership. Runyan’s tenure has seen a substantial amount of change and improvement at Ohio’s principal swine exhibition.

“I actually started in 1963 as a barn boy for Art Jordan. He was also the swine herdsman for Ohio State University there and also filled in as superintendent of the swine shows at that time,” Runyan said. “There was a group of us from Champaign County that actually came over and did most of the swine shows and obviously that’s how I got kind of involved with them. I just happened to come along and end up one of those guys out there on the hurdle. That’s how I first got started and involved with the State Fair.”

Runyan himself had plenty of experience with swine even before his barn boy work at the State Fair.

“The family had always shown hogs at the Ohio State Fair,” he said. “We showed what we called Spotted Poland China hogs back then under Oak View Farms.”

“Then I showed, of course, at the Ohio State Fair through my 4-H and FFA years. We could still show until 21 at that point,” he said. “The family’s always raised hogs. I think I bought my first Hampshire sow when I was a freshman in high school to start my FFA project. I’ve had Hampshires ever since. My dad was always involved with Spots. He traveled with the National Spotted Association for a while and was president of the national association.”

As Runyan grew up and started a career as an ag teacher, his work schedule allowed for him to continue serving in the swine barn.

“I taught ag at Mechanicsburg High School in Champaign County for several years. I also worked with farm business planning and analysis, which was an adult farm management recordkeeping program,” he said. “I worked for six years doing that in Clark County. Then the job opened back up there in Mechanicsburg and I guess I kind of missed the kids so I decided to go back to teaching high school ag in about the mid-80s.”

Runyan soon found himself serving as the assistant superintendent in the swine barn for the Junior Fair shows beside another long time barn employee, Charlie Andrews, who also recently retired from the State Fair.

“Charlie was actually superintendent of the Junior Fair swine shows and I assisted him. That would’ve been in my early ag teaching years back in the early 70s. When we were doing that, we were both there the year we moved into the present barn, which I’m thinking was 1973,” Runyan said. “Phil Grover became superintendent about that time and he asked me to stay on and work in part of the shows with him as assistant superintendent for breeding shows primarily. About the mid-90s, Phil moved on. He’s

Runyan has the unique ability to draw on his years of experience when asked about changes the barns and shows have seen in that time.

“When I started helping Phil Grover, we introduced the idea of actually having some of those entrance pens at the end of the show ring. Prior to that, the older folks would remember we’d use to have just a tremendous fiasco trying to get the pigs into the ring. We’d pretty easily end up with 40, 50 pigs in one area and we’d all try to get through one little opening to end up in the show ring,” he said. “We came up with those entrance pens and that’s been really nice. It was very exhibitor friendly of course — lots of little physical things around that the barn has lent itself to.”

Another important addition to the State Fair was the creation of the Buckeye Barrow Boosters that has generated tens of thousands of dollars for the exhibitors.

“Ralph Doak was very involved in the starting of the Buckeye Barrow Boosters, which was a group to reward those breed champions that we had in the Junior Fair and have that barn sale as we refer to it. When I started, we were selling some of those champions well below county fair figures,” he said. “That was a big highlight — a great improvement that really helped our breed shows quite a bit.”

Runyan said not all parts of his tenure were completely enjoyable. For a time, he said he became the “hair man” across the state of Ohio due to enforcing rules about the length of hair on show hogs. His rulings did not always sit well with exhibitors, but making decisions and standing by them is part of the job, he said.

“We don’t want to forget — sometimes I think we have a little bit — and I’m old school enough to like for the kids to know that this is a real live animal we’re working with here and we do need to care for them. In the same token, we realize that they are part of the food chain and we need to treat them accordingly and realize that’s where they’ll end up,” he said. “That’s a little harder today than probably what it was a few years ago.”

In the end, his work with hog shows has been all about the people.

“The most important outcome of the whole experience for me was the people — all the people that we did meet across the state and the tons of young people that came through showing hogs,” he said. “There are many, many successful young folks out there that showed pigs through the Ohio State Fair.”

Runyan may be done with his part at the Ohio State Fair, but that doesn’t mean he’s retiring from agriculture. He and his wife Jane will continue to raise pigs on their Logan County farm south of Bellefontaine known as “DaJa View Farms.” The two are also becoming more acquainted with Florida, having recently bought a home in the Sunshine State. They are hoping to spend some more time down south in addition to their Ohio residence.

Runyan said his wife has been a big part of his success through the years.

Tapped to be his replacement is another native of west-central Ohio. Matt Bennett, originally from Logan County, is going into his sixth year of teaching ag at Oak Hill Schools in southeastern Ohio. He, like Dave, has worked his way up the ladder of command from barn boy to the new superintendent.

“He, I think, is going to do a great job stepping in and keeping things going. He is a very organized young person and very energetic. I feel very good about Matt,” Runyan said.

In terms of advice for the new leader of the O’Neil Swine Barn, Runyan said to focus on staff, being cooperative, and being exhibitor-friendly.

“I was very fortunate. I surrounded myself with a tremendous staff of folks that were willing to come and help,” Runyan said. “My advice is to surround yourself with good people and your job’s a whole lot easier. Remain exhibitor-friendly and you’ll have hopefully as much fun as we did.”

As he takes on his new role, Bennett will be relying on his experience, having been involved in nearly every activity in the swine barn for several years now. He has seen several changes over the years as well.

“I was there in the days where we had just one scale. We had probably 20 head chutes that we were constantly having trouble with getting pigs tagged through,” Bennett said. “I liked the addition of the crossbred open youth jackpot gilt show. I think that’s a big opportunity for a lot of people that we had missed the boat on for a long time and now that we’ve got that open there for them, that’s just more ways for these kids to have fun.”

Bennett said it would be a difficult task to replace his predecessor.

“It’s a role that I definitely will never be able to fill to his capacity. The biggest thing that I want to accomplish while I’m director is staying exhibitor friendly, making the State Fair a fun place for people to come and enjoy, and making sure we educate the youth while we’re there,” Bennett said. “In my mind, I think Dave’s done a great job of getting the swine barn where it needs to be. There were a lot of people that have retired and we’ve got a lot of shoes to fill with that, but we’re going to try to do our job and surround ourselves with good people that are there for the right reasons.

“I would just tell Dave that I’m very thankful for the time he’s shared with me. I’m thankful for him to kind of take me under his wing there and prep me for this.  He always has the mindset that it is exhibitor first. There’s a lot of things that people take the wrong way and his interpretations are always, ‘We’re here for the kids’ and I think that’s a great mindset to have.”