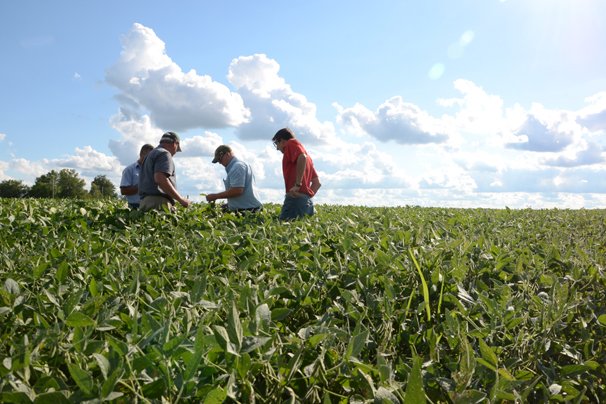 Corn Summary: Looks like the field was initially wet early in the season then things dried out. There was some N deficiency and more disease pressure on the outside of the field, though overall low disease levels. The fields was at R2 as it had a late start. The field is fair but pretty good compared to surrounding fields, but it is awfully late. It will make a crop but it will be wet and has a ways to go. It had a shallow kernel depth and a yield of 148 bushels per acre.

Soybean Summary: Soybeans looked good to excellent and the stand was even. No disease or insect pressure. Population was 200,000 to 217,000. Canopy height was 32 to 34 inches and drilled at 7.5 inches. Field is dried and cracking and will probably yield in the mid-40s. Plants were not branching much and the nodes were fairly far apart with first node six inches off the ground. 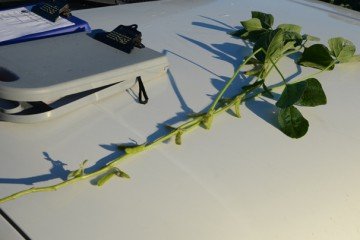 Corn Summary: Corn plants were generally pretty short and showing significant N stress. There was little disease and insect pressure. The ears were very small and in R1 or R2 stage, very delayed for this time of year. The field was maybe a bit worse than surrounding fields and was rated poor. The yield estimate was 113 bushels per acre.

Soybean Summary: Good even canopy at 23 inches tall. Drilled beans. The first node was four inches up and there was no disease pressure. We saw some limited feeding on the leaves. The nodes were closer together and the plants had a bit more branching than the Williams County field.The population was around 230,000 with a yield potential maybe in the low 40-bushel range with fair potential. We have been seeing much more prevented planting than we expected, especially in corn stalk ground going to beans.

Corn Summary: Stand was at 32,5000 and relatively even despite reported extreme early season variability. Field was planted on May 3. No insect pressure and very little disease pressure. A little bit of NCLB. The best field of the day and fairly representative of the area. Things have really improved with better weather lately. At the R3 stage, though development is variable, and by far the furthest along of any field we have seen. Yield estimate 159 bushels.

Soybean Summary: There was some variable height across the canopy and good population through out. Planted in 15-inch row spacing and very good nodulation on the roots. The canopy height was around 33 inches and the first node was four inches off the ground and 2.5 inches between the nodes. Little to no disease and insect pressure. Pod set was all the way to bottom with many three bean pods. Yield potential is good, maybe 50 bushels, and the best we have seen so far.

Corn Summary: Uneven stands with flood damage, poor stalk quality, tops falling out, high disease pressure and N loss. It was a non-GMO field planted May 2. There were leaves turning purple throughout the plant. Some ears almost at dent in mature field of the day. Heavy European corn borer feeding, tip back, zipper ears, inconsistent stand, and generally poor field with many problems. The high population of 35,000 is only thing saving yield potent in this extremely variable field. One of worst looking fields in the area. Yield estimate is 136 bushels.

Soybean Summary: Good but uneven height from 24 to 36 inches tall. The first node was 3.5 inches off the ground with2 inch node spacing. Rain will really help this field. Population of 156,000 with no disease or insect pressure. Field was sprayed late, after wheat harvest. Overall good yield potential here with pods filling and probably the best field of the day — one of the better fields in the immediate area.

Corn Summary: This was 110-day corn planted April 30 at 34,000 population in 15-inch rows. We counted 33,000 to 34,000 population. Has had sulfur applied at planting and sidedressing. Light disease pressure and no insect damage. On the lighter ground ear fill was marginal with some tip back but on better ground filled to the end. The good ground had 16 rows around and averaged 205 bushels. Excellent field and the best of the trip so far. Yields were 135 on the poorer ground. Yield estimate 200 bushels.

Soybean Summary: Even and consistent stand with canopy height at 41 inches. They were very bushy with many branches. The first node height was two inches and the first pod was at six inches. There were some four bean pods with 2.5 inches between the nodes. No disease pressure but there was some Japanese beetle pressure worth watching. There had been some foliar applications of manganese, boron, and NPK. The population was 126,000 and was planted at 140,000 population. Best field of the morning for soybeans — good to excellent.

Corn Summary: It is starving for N. It was an even stand but only five to six feet tall. There is quite a bit of GLS and NCLB. There is corn borer feeding in possible refuge corn. There was a population of 33,000. There are zipper ears and tip back that shows signs of extreme early season stress from moisture. Now it is in need of water. Very poor field. There was more variability at the Wood County site which actually helped it there. This field was just consistently bad. Yield estimate at 119 bushels.

Soybean Summary: This is the worst field of the day. It is in 15-inch rows and not canopied. Tile lines are evident. It is highly variable with an average height of 25 inches or so. There were big holes in the field with nothing in the low areas. They have been flooded and now need moisture. Poor nodulation in the field. Two inches between the nodes. Pods are small and beans are small. Poor, poor, poor conditions. The population was 94,000.

Corn Summary: Uneven field and tile lines are easy to find. Heavy weed pressure due to wet conditions and no chance to apply herbicide. Rains washed residuals away. N deficiency is a significant problem. No real disease or insect pressure, other than  physoderma brown spot. Ear development is poor. with a generous yield estimate of 70 bushels in this very poor field.

Soybean Summary: There was a plant population of 83,000 due to water laying in the fields. There were few pods set but the plant was still in bloom and there is still potential to add yield if they get some rain and the growing season is long enough. The canopy was only 20 inches tall and the 15-inch rows had not yet closed. The ground is cracking wide open and needs some water. No disease or insect feeding was found. This was by far the worst stop so far after some very clearly challenging conditions. The low population will mean some lost yield.

Corn Summary: The population was 31,000 planted on May 8. The field had spindly stalks and small leaves. There was a little disease pressure and some corn borer feeding. The plants were short and at R2. It was very uneven following tile lines. There had clearly been quite a bit of rain early in the season here. It has gotten rain but could use more to bump yields up a bit. The plants looked healthy but had small ears. This was a poor field overall. The yield estimate is 110 bushels per acre.

Soybean Summary: These were planted in 10-inch rows at 180,000 population on May 21. The final population we counted was 115,000. The canopy height was variable from 12 inches tall to 21 inches tall.  It was three inches to the first node and 4.5 inches to the first pod. No disease or insect problems. A lot of the pods had beans in them and they still have potential for 35 or 40 bushel yields. Overall it was fair compared to other places in NW Ohio.

Corn Summary: This is the best corn field of the day so far. It was planted on May 5 with 32,000 plants per acre. We found a stand of 31,000. There was no disease or insect pressure and ear fill was excellent. There were no real N issues. It was among the better fields in the area. No fungicide had been applied. The moisture was adequate. Excellent fie;d and yield potential. Yield estimate is 201 bushels.

Soybean Summary: This was a 3.3 maturity bean planted at 150,000 population in 15-inch rows on May 8. The canopy was 38 inches. It was eight inches to the first pod and 2.25 inches between nodes. There was really good nodulation on these beans. There was no major disease and some light feeding from Japanese beetles, especially at the field edges. The final population was at 130,000 in this excellent field, the best of the day.

Corn Summary:  Corn was pretty well advanced, around R3 or R4. These were some of the fullest ears we have seen today but there were signs of N deficiency. Disease pressure was light. Ear fill was generally good, though there was some tip back. It was an overall excellent field. We ended up with 32,000 plant population with a yield estimate of 160 bushels.

Soybean Summary: Soybeans were in 15-inch rows and 38 inches tall. There was excellent nodulation on the roots and they were almost done blooming. It was about two inches to the first node and three inches to the first pod and 2.5 inches between nodes. We did see some frogeye and a little white mold. There was some mild Japanese beetle damage. There was a population of 163,000 plants per acre in this excellent field.