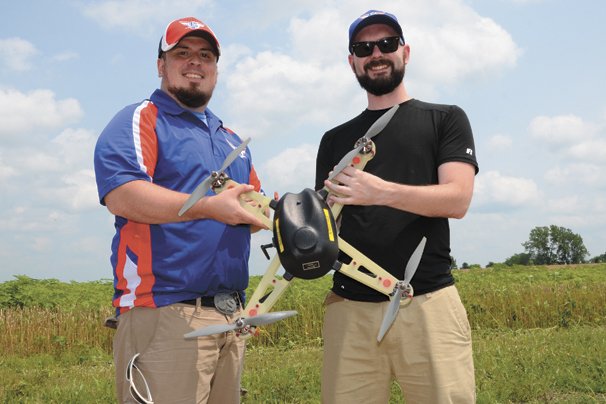 Brian Kronenberger and Jason Adams hope to serve agriculture from the air through USAerobotix.

Those involved with American agriculture have an ongoing love affair with new technology and ways that it can be put to use addressing challenges on their farms.

There are plenty of farmers out there who could find a use for an unmanned aerial vehicle, or drone, in their operation. The problem, though, is that they are not allowed to use a drone for anything that could make money, based on rules of the Federal Aviation Administration (FAA).

“Recreationally, there has been an advisory where if I wanted to buy a drone and fly it I can based on the rules from the FAA. But if you use that film from the drones to make money than it’s illegal,” said Brian Kronenberger. “It is your drone, your field, but it is not your air space. The second you start doing it for money is when the FAA starts to consider it to be unsafe.”

Kronenberger is in his early 30s and supporting his family, but rolling the dice and following his passion in the emerging field of drone technology — something that was not even a possible career path just a few years ago. He studied the technology at Sinclair Community College in Dayton and was among the first students to graduate from the school with an Unmanned Aerial Systems (UAS) certificate. He sees tremendous potential for his field in the fields of Ohio’s farms.

Kronenberger works at a bank, but he is hoping a new career takes flight with recently formed USAerobotix in Greenville. Founders  David Furlong and his son, Jacob, and Jay Adams and his son, Jason, started USAerobotix in the same position as many farmers who want to use drones commercially — they saw possibilities but were not allowed to use them to make money for Furlong’s tree care, lawn and landscaping business.

“It was my father’s idea,” said Jason Adams, who is the vice president of USAerobotix. “He said, ‘Wouldn’t it be a great idea if we could inspect tree lines for tree clearing around large distribution and transmission lines for big generating companies?’ Then it was kind of like a rabbit hole — you just fall in and it leads to one thing and then another. We started looking into this in July of 2014. The more we looked into it the more we realized that we would have to work a lot harder.”

For commercial use, Jason determined that they needed an exemption from the FAA.

“We had to convince the FAA that we were allowed to use drones. First, you have to have someone with a pilot’s license to get an exemption. Then you have to come up with your own rules that meet or exceed the rules that we are being exempted from. I had to look up the code of federal regulations for everything, find all of the rules that didn’t apply for us and then ask for an exemption by suggesting how we are going to make up for it,” Jason said. “To create all of the paperwork and the manual and the checklists and other things took about eight months. Then you submit it for review publically where anyone can comment. Then, if thy are approved, the FAA gives you the exemption.”

There is a $5 fee for the aircraft number, but otherwise there is no cost for the exemption. The process was arduous, but in the end Adams sees the value in jumping through all of the hoops.

“They do not make it easy, but we want the barrier of entry to be high because this is all about safety. We are in agreement with the FAA on that. First and foremost is safety, which is why the regulations exist,” Jason said. “It has nothing to do with big government or big business — it has everything to do with safety. It was frustrating but in hindsight I can understand the need for safety with this. These are not easy to fly and it can be very disorienting. You have to have a process to do this safety.”

At first, it is easy to question how drones can be unsafe when being used by a competent, well-meaning businessperson trying to benefit from the technology. But, when in crop fields, what is the procedure for dealing with a crop duster in a neighboring field? What if a life flight helicopter comes through? What if a low flying crop-scouting helicopter passes by? As more unregulated drones start buzzing around the rural skies, these potential problem situations will become increasingly common. Because of this, Adams said there is a need for procedures for handling the wide variety of situations safely, which is

where the many layers of regulation come into play.

“It is hard work to get the exemption but we got it so it is not impossible. We got our exemption in May. At that time there were only four other companies in the country that had exemptions for what we are doing and they were all utility companies,” Jason said. “We were the only company in Ohio with an FAA exemption for what we do, which includes agriculture. We can do anything as long as it is not making movies. The movie industry has their own set of standards for aviation.”

For the exemption, they had to specify the exact type of drone that would be used. After some extensive research, they decided upon the EH-4 from SelectTech GeoSpatial in Springfield, Ohio.

“There are a lot of uses for this aircraft, including search and rescue efforts with the Columbus Police Department,” Jason said. “The technology we use is an ongoing project with small changes here and there. Our modifications are mostly with American parts that are fabricated in Springfield. It is made mostly from plastic and fiberglass to be the least conductive as possible and metal parts are spaced as far apart as possible for working around electric lines. We make it simple, but to make it simple is very complicated.”

When on the job, the drones are carefully monitored to ensure that they are where they need to be.

“We can use a computer or tablet that will send commands to the aircraft so it can fly on its own to survey a field. If we do it manually we can set it to fly the same path later from year to year and inspection to inspection. Then it flies back and lands in the same spot it took off. A big misunderstanding is that we are sitting in an office somewhere with a bunch of drones flying around. That is not the case. We always have two people within eye contact of the drone: the pilot in command and a visual observer,” Jason said. “We maintain control of it at all times and the pilot can take control at any time. We have six fail safe measures. For example, we tell the computer that it is out of battery at 25% so it always has enough energy to return. Depending on how heavy the cameras are we are looking at 10 to 15 minutes per flight. That keeps the pilot in command responsible. It has its own built in safety feature. After it lands we swap out the battery and get back in the air. Recharge takes 35 to 40 minutes.”

The actual flight is just the beginning of the process. In many cases, the analysis of the data collected takes the bulk of the time back at the office, depending on the specifics of the task.

“For agriculture, this is a lot less about flying over the fields and a lot more about the data,” he said. “We use high def and infrared cameras that are custom designed. Eventually we are going to have near infrared to determine crop health and we can do an overlay with an HD photo and the infrared to get a

picture of a lot of different things in the fields. We can do any aerial inspection. That can be in fields for crop health, determining where to spray, or we can determine capillary action of the plants with our infrared. We can also work with ODNR to look at tree health for issues like emerald ash borer or other pests. With local electric cooperatives, we determined there was enough of demand to invest our time and effort into this. We have service for big generators all the way down to the small guys too. We are taking away the danger linemen would face just doing regular inspections so that can do their jobs more safely. With any job, once we collect the information, a lot of the inspection process is then done on the computer.”

They admit that USAerobotix does not have an extensive agronomic background as they begin to look at more agricultural applications, but the young company is partnering with local agribusiness to determine how to best move forward and develop recommendations based on the findings in the fields.

Jason feels that USAerobotix capitalizes on the region’s rich aviation history and resources, capacity for innovation and technology and deep agricultural roots.

“We are now experts in this but there were no experts in this a year ago. I think Ohio is going to be the center of all of this. We have tools that many farmers don’t even know exist and farmers know what is going on in their fields — there needs to be a connection with this,” he said. “With educational leaders in the field like Clark State and Sinclair Community College nearby, this could be a real asset to this area. Agriculture is also a huge part of the area and most places do not have this marriage of the aerospace industry and agriculture that we have here. The local electrical co-ops and local farmers can benefit from this and we could be looking at a big surge in growth economically for the area with this technology.” 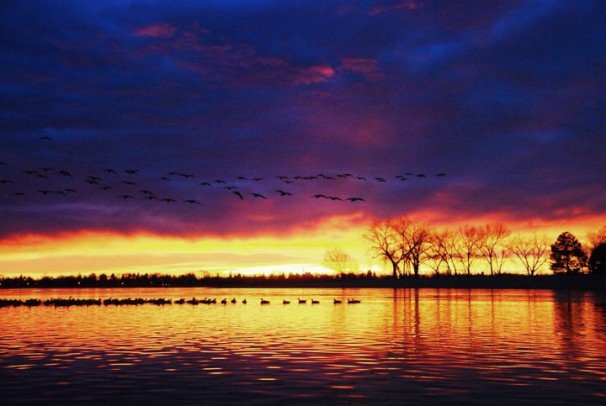 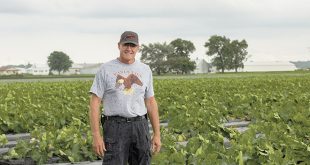