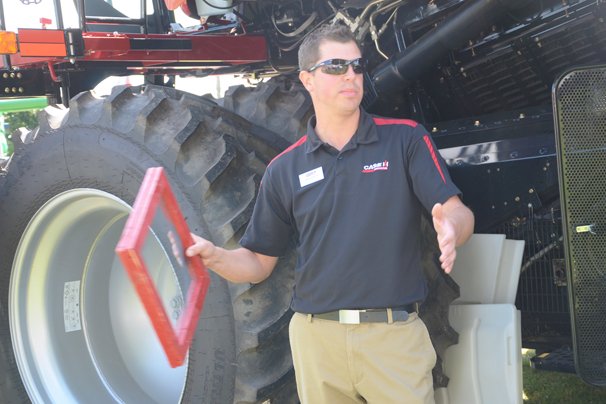 The growing season has offered enough challenges for producing bushels this year that any type of excessive harvest loss is a significant concern. With that in mind, as harvest gets started this fall it will not hurt to give the combine a good once over and check to see how many bushels are not making it out of the fields.

“The industry standard from university studies have found anywhere from 1% to 3% is acceptable combine loss. We should be able to get it down to 1% with a newer machine, depending on the field conditions,” said David Booth, Case IH combine specialist. “Use a one-foot by one-foot screen, piece of floor mat, piece of rubber, or whatever you want to use as long as it is a foot by a foot. Throw it between the wheels under the combine as it goes by. Whatever grain you see on the bottom of that screen is going to be from the combine head or from pre-harvest loss that was already there. Any of that loss needs to be addressed at the header. If it is on top of the screen it is coming from the machine. Roughly two kernels of corn and four beans on or under that screen is around a bushel of loss. That is if the combine is in spreading mode for all of the residue.”

For harvest loss at the combine head, there are several things to address on the corn head.

“For corn, you want to make sure you’ve got your stripper plates set correctly on the corn head. They should be an eighth of an inch wider at the rear than at the front. That will allow the trash and material to feed through there in the row unit itself.

It should be on center because if it is not, you’re going to pull that stalk down at an angle and that is going to cause butt shelling and that will cause loss right there at the head. You need to make sure your row units are lined up and your deck units are centered on the row. We also want to look at the point-to-point knife roll and we want to make sure those knives are good and sharp. If they are worn out they will not process that stalk efficiently.”

For soybeans, there are also a number of areas that could lead to losses from the head.

“Make sure you have got good sharp sickle section and make sure you guards are not worn so you are getting a very clean cut and good shear point,” Booth said. “The other thing to look at is your reel speed. It should be roughly 10% faster than the ground speed. If your reel speed is too fast you will be knocking some beans out of the pods before they get into the head. You want to have the reel in the right position so it is engaging about the top one third of the crop.”

Addressing the corn and soybeans on the top of the screen will require a look at what is happening in the machine.

“If it is coming out of the machine, you have to look at where it could be coming from — the sieve, the rotor or somewhere else. To do this, you need to do a kill stall where you get the machine up to harvest speed and then kill the machine to get a snapshot of exactly what is going on inside that combine,” he said. “On a Case you take the hydro handle and shove it all the way forward, pull the throttle down and ride the brake until it kills itself. You may have to shut the key off if it doesn’t die.”

Once the combine is stalled, problem areas can be safely inspected.

“You want to start at the feeder house and see if you have any damage there or if grain is being lost. Then go into the rotor area. The front half of the rotor is where all of the threshing is going to be taking place — all of your grain should be threshed out in the front half,” Booth said. “As you go back into the cleaning system everything should be fairly evenly distributed and not just piled up on one side or the other. That will allow for maximum cleaning efficiency. You can see losses in the threshing area if you are not getting all of the grain threshed. If there is unthreshed grain getting into the separating area, we call that rotor loss. If you are in corn and you see pieces of the cob that still have the kernels on them you will usually want to tighten up your concave area a little bit to get those remaining kernels. That will move the concave closer to the rasp bar and speed up the material flow through the rotor.

“Cleaning system loss can be dictated by your fan settings. If your fan is set too high with a dry crop it can blow the grain out the back of the machine.”