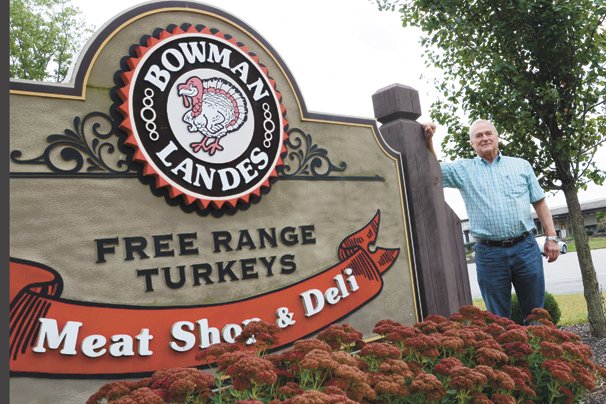 Carl Bowman, along with all of Ohio’s poultry producers, is very concerned about the risks of avian influenza.

While there is plenty of discussion in Ohio about the threat of avian influenza as Thanksgiving — and the colder winter weather — approaches, the most common conversations on the subject may be with God.

“We say our prayers every night. Avian influenza spreads easily and the amount that fits on a pinhead could wipe out an entire farm,” said Carl Bowman, of Bowman and Landes Turkeys, Inc. in Miami County. “When I go to these meetings I keep hearing it is not a matter of if we get it, it is a matter of when. We learned a lot this winter in terms of how you treat an outbreak, but it would be a total loss for our turkeys. We could lose 80% to 90% in one week and if you get it they have to destroy them all to stop the virus. I don’t ever remember having any kind of threat like this before. The whole industry has to tackle this together because it will affect us all.”

The free range turkey operation that markets 75,000 to 80,000 birds a year has a unique set of challenges to face when dealing with avian influenza risks that are primarily spread through wild birds, particularly during migration.

“We are unique because we are free range and I can’t put all of my turkeys in barns and lock them up,” Bowman said. “That won’t work for us.”

They have implemented some fairly unique biosecurity measures to address the challenge.

“Our biosecurity is the tightest it has ever been. We make sure everything is super disinfected and keep everything clean around the barns. We post signs telling people to not come beyond a certain point. Anybody going in, say the hatchery truck, has to change their clothes and spray off the tires,” he said. “We keep the range grass higher because geese and ducks don’t like that for landing. You can get nuisance permits and we have one, but mostly we try to discourage them. We put a woven wire fence around the lagoon so it makes it harder for the ducks and geese to land. They need to have a much steeper angle when they come in and take off and that discourages them from landing there.”

They also carefully screen the employees working directly with the turkeys to make sure they are not regularly exposed to other domestic birds and they have added footbaths around the farm.

“It is more time consuming than expense. We have to replace the footbath solution every day. It just takes more time,” Bowman said. “We try to educate the people working with the turkeys about how serious this is and how important it is for them to follow our biosecurity measures. We talk to our employees all the time about these issues and they are understanding.”

They have also been working to educate customers about the challenges with avian influenza.

“We normally have a farm day in September and we cancelled that this year. There are so many backyard flocks out there that people could be around. Our customers have told us that they are disappointed but they certainly understand,” Bowman said. “We put information about this on our website and Facebook to try to keep the customers up on what is happening and why we are doing what we do. We emphasize that the poultry is still very safe to eat and it will not affect safety issues for humans, though people really haven’t asked that much about it here.”

Since November 2014, the outbreak of highly pathogenic avian influenza H5 has killed close to 50 million birds from commercial and backyard flocks in 19 states, according to the U.S. Department of Agriculture. There were particularly heavy losses to egg farms in Iowa — the nation’s No. 1 producer of eggs until the current outbreak decimated production there — and egg prices have been soaring across the United States, more than doubling in some parts of the country.

It has not yet been found in Ohio, though there have been extensive efforts to research the virus and prepare for the worst in the state. The U.S. Department of Agriculture, Ohio Department of Agriculture, Ohio Poultry Association and experts with the College of Food, Agricultural, and Environmental Sciences at The Ohio State University have been helping poultry producers learn about the disease, boost biosecurity measures on the farm, and prepare to minimize the flu’s impact if it were to reach the state.

Ohio’s is home to a $2.3 billion poultry industry and directly supports more than 14,600 jobs, according to the Ohio Department of Agriculture. Nationally, Ohio ranks ninth in turkey production and is a top egg producer.

Mohamed El-Gazzar, Ohio State University Extension’s poultry veterinarian, has been working with the poultry industry since the virus was discovered in the U.S. He said there are two main types of challenges when it comes to the current outbreak: issues related to the virus itself and the logistics of disease control.

“The initial data shows that this virus has a relatively longer incubation period, about seven days, compared to other highly pathogenic avian influenza viruses,” El-Gazzar said. “This allows the virus to get into poultry houses and remain undetected for a longer period of time, which in turn provides a higher chance for the virus to be transmitted to other poultry.

“Another challenge is that, unlike many other highly pathogenic influenza viruses, this virus produces mild to no disease in wild migratory birds, with estimates indicating that this virus might survive in wild bird population for up to five years. This means there could be recurring episodes of this outbreak with possible new introductions in the fall and spring migrations.”

Once the virus is found in a particular location, El-Gazzar added, control and eradication strategies pose their own challenges — especially in poultry-dense areas such as Darke and Mercer counties in western Ohio, where it is more likely to spread from one farm to another.

“In this situation, the U.S. strategy is to quickly identify the infected premises, depopulate, properly dispose of carcasses and manure, clean and disinfect the premises, and have 21 days of down time after cleaning before re-population can take place,” he said. “As you might imagine, the logistics of depopulation and disposal are very challenging, particularly with the large-scale layer complexes, some of which have a capacity of more than 5 million birds.”

El-Gazzar said that OSU Extension has been primarily engaged with informing the poultry industry about the disease and disease progression; working with producers on communication and preparedness for an eventual outbreak; and identifying the best ways to depopulate and dispose of birds.

To address the challenge of safe disposal, El-Gazzar earlier this year collaborated with Fred Michel, a biosystems engineer with the Ohio Agricultural Research and Development Center.

A composting specialist, Michel developed a plan that would allow Ohio egg farms to compost up to hundreds of thousands of dead chickens onsite, reducing the risk of contamination to other layer houses or nearby farms. The plan has been shared with the industry, along with a map that shows where sawdust, wood chips and other materials necessary for the composting process are available.

“Ohio State has worked extensively with us on different scenarios of how the avian flu virus could impact us and how to handle that,” said Bill Knapke, environmental manager for Cooper Farms, a large poultry operation in western Ohio. “The emphasis has been on taking biosecurity to a new level to avoid spread of the disease, and focusing on our mortality disposal methods right on the farm.”

Ohio State scientists are also tackling avian flu and other poultry respiratory diseases on the research front. For instance, OARDC virologist Chang-Won Lee leads a U.S. Department of Agriculture $7.2 million grant that partners scientists at Ohio State with colleagues at other universities in poultry-producing states.

The project’s goal, Lee said, is to better understand the ecology of poultry diseases to develop more effective prevention strategies; validate diagnostic methods currently employed and create better ones as needed; and gain a better understanding of the relationship between disease, host and environment to aid in the development of new control methods.

Keeping the virus out of Ohio and minimizing its impact if it were to reach the state are crucial for both consumers and farmers, El-Gazzar said. If this outbreak would extend to Ohio layer operations, egg prices would increase even more dramatically nationwide, affecting both consumers and food manufacturers.

Additionally, if Ohio were to experience a 50% loss of poultry production, OSU Extension estimates the ripple effect would reach $1 billion in overall economic losses, including $815,000 in annual wages, said Sam Custer, an agriculture and natural resources educator based in Darke County.

“If we would lose half of our poultry for a six-month period, you would reduce corn demand by 27 million bushels, the equivalent of 9% of our state corn production,” he said. “Soybean demand would be reduced by about 5 million bushels.”

In the meantime, El-Gazzar stressed the importance of implementing strict biosecurity practices to help prevent outbreaks in Ohio.

“The wide and fast spread of the virus in poultry farms in the Midwest, particularly in Minnesota and Iowa, indicates that the major change the poultry industry needs to adopt is tighter biosecurity,” he said. “This outbreak has clearly shown that the U.S. poultry industry has many gaps in its biosecurity practices, and we need to identify and amend these gaps.

“Another area for improvement is better mapping of the poultry industry in each state, which will help to identify the infected farms, quarantine zones, roads, car wash stations and other useful features that can facilitate the control and eradication efforts.”