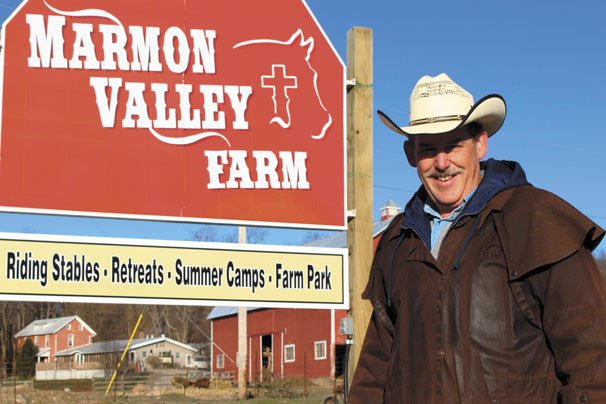 Matt Wiley enjoys the chance to connect with youth on the farm to share the gospel of Christ and information about agriculture.

Out of the otherwise flat ground of west central Ohio arise the hills of the Bellefontaine Ridge where Ohio’s highest point stands and fertile valleys lay between the peaks. Named for the three Marmon brothers that settled the area in 1805 to get away from the slavery trade in the Carolinas, the Marmon Valley Farm has served as a place fertile in faith and rich in agriculture for many years.

Though the settled valley is old, evidenced by a neighboring church founded in 1807, the Logan County farm stays extremely active. Matt Wiley is the executive director of the 510-acre horse operation that specializes in “agri-tainment.” About 250 of its 510 acres are used for trails through woods in the hilly region.

Wiley defines the agri-tainment on his farm as, “doing those activities but yet still in a way that entertains through agricultural connections.”

“Wrangler Matt” as he’s known on the farm, has been with the operation started by his father since it’s beginning in 1964, recently celebrating its 50th year.

“I was pretty active in the FFA as a high schooler and my dad taught me a lot of basic things growing up. Of course the trail riding, calling some square dances, and driving hayrides and all of that,” Wiley said. “So then through the FFA and vo-ag connection, I was able to use those skills to go all the way to nationals for the Recreational Proficiency Award. When I was 21 and my sister was 23, my dad moved to another location where another camp was already founded. Just through phone calls and direction from him, we kept the place going and kept expanding.”

The operation offers a variety of programs throughout the year with a horse focus from summer camps to riding sessions for people of all ages and backgrounds. One of their more unique offerings is an eight-week group lesson package.

“It’s about an hour and a half program. They get a little bit of groom and saddle time, the arena time, plus a trail ride with the instructor’s help — just working on progressing their skill levels,” Wiley said. “We’ve had more than one family do that because they’re considering buying a horse, but they want to see if their child is set on that before that family takes the step to make a purchase. It’s a huge step so a lot of families kind of test the waters here before they make a plunge to get their own horse.”

“Each day is different. The seasons, of course, change. In the wintertime, we serve guests that go skiing right across the way at Mad River Mountain. They’ll stay at our lodging and we cook some good meals for them and so on.”

The farm is home to around 150 horses.

“We have a mix of breeds. Quarter horses work out well,” Wiley said. “We also have some Arabians, even a few thoroughbreds. We’ve got, of course, some Shetland Ponies in the mix, and some Halflingers — so quite a variety of breeds.”

The numerous old barns that make up the property have been converted into more suitable structures for today’s needs. For instance, what used to be the dairy barn now houses a petting zoo on the ground floor and a hay maze, climbing wall, and dance floor in the haymow. The bull barn has been transformed into a bunny barn, and many other old structures now serve as bunkhouses.

The farm also produces about 120 acres of hay for the horses.

“We do mostly all of it ourselves. We do sometimes buy a little bit of hay here and there,” he said.

“With 150 horses, you still have to have some farming practices in agri-tainment,” he said.

Marmon Valley Farm deals with weather struggles like most agricultural operations. The cold of Ohio’s winters over the past years have been a challenge for keeping guests comfortable. Wiley noted that

though the indoor arena is not heated, the protection from the wind is usually enough to make things bearable even on the coldest of days.

“We’ve had on a Saturday morning at zero degrees more than one parent call and ask, ‘are lessons still on?’” he said. “It really hasn’t slowed us down a whole lot. There’s been a couple of days we’ve had to cancel if it’s too extreme.”

The rainy weather of 2015 also created a number of challenges.

“Even last summer with the rains, we had to completely flip flop as we usually do our riding in the morning,” he said. “When you have a program that involves horses, weather, and people, you have to be flexible. ‘Liquid sunshine’ is term my dad used to use to encourage guests to still have fun on a rainy day.”

Year-round, eight to 10 people are on staff. Weekend part-time help is also used, usually high schoolers or other interested individuals. About 30 to 35 are hired for the summer through Marmon Valley Ministries, a 501(c) 3 non-profit that leases the land from the family corporation, opening up scholarship and other opportunities for summer campers.

Marmon Valley Farm is a faith-based operation, seeking to spread the Christian message to all who come to visit.

“Primarily, the summer camp is our way of reaching a lot of city kids to not just do the fun camp activities, but also introducing the Christian atmosphere using the horse as a neat way to share Christ, “ Wiley said. “There are a lot of teachable moments we try to tie in. We encourage our staff, whether you’re doing archery, riding the horses, or playing a game, to try and take a moment for that teachable time to really focus on Christ.”

Being such a short jaunt from the Columbus metro area, Wiley says being a positive representative of the agricultural world is another constant focus.

“We’re also finding more and more that agricultural education to those folks is very important these days,” Wiley said. “On a school field trip, we’ll do the animal tour, hay ride, and pony rides so we can teach them about hay and straw, and teach them that yes, we do still get our eggs from chickens.

“If you can hire and educate a city boy on your farm, I try to take advantage of that opportunity too, because again just having those connections to whatever we can do as agriculturalists to educate is vital in today’s day and age. Even in our lesson program, the child gets a chance to groom and saddle the horse. They realize the importance of the work involved. We don’t always have them scoop the manure and all that, but every now and then a child will ask if they can. There’s this neat opportunity for us to share with the general public. I just see more and more the need to connect.” 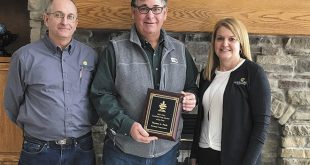 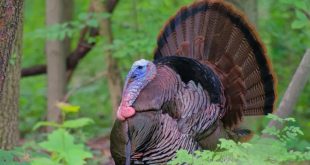