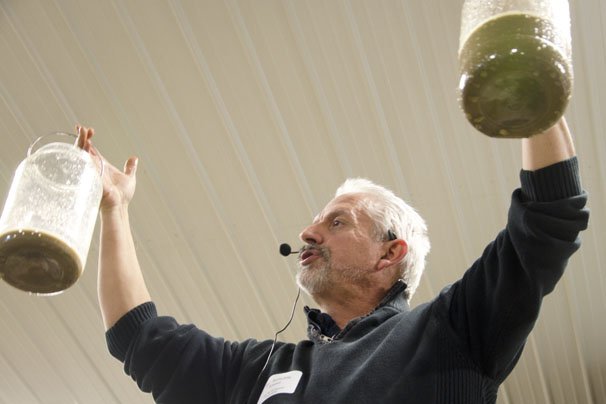 As has become the norm for the event, those curious about no-till and cover crops made the pilgrimage and packed the farm shop on David Brandt’s Fairfield County farm yesterday.

Stories of no-till and cover crop successes and failures were swapped over lunch and dedication levels to building soil health were reinvigorated by the compelling line-up of speakers, and, of course, the internationally known host of the 2016 Ohio No-Till Council Spring Field Day. License plates on the trucks parked in the field were from all over the country and from Canada, with a few folks making the trip from Toronto — all on an early spring day when there were probably several other things that could have been addressed on their farms back home. Nonetheless, the more-people-than-seats crowd was eager to learn and attentive.

Ray Archuleta, the dynamic Natural Resource Conservation Service soil health specialist, led off the program with several different visual demonstrations showing the powerful combination of no-till and cover crops. He said the biggest limiting factor in rejuvenating our soils is the human mind.

Ray Archuleta on learning from nature

Archuleta encouraged the listeners to think about how the soils they farm were originally formed.

“The soil in the forest and prairie are covered 24/7 and they have animals in the system. They have diversity and they are never bare. We need to follow some of those principles and mimic nature on our farms,” he said. “Buffalo, for example, group very tightly because of predators. Now some of our graziers are grouping cattle very tightly using hotwire. That gives us better manure distribution and we are getting great responses from our pastures.”

“If you teach people how the soil functions, they use fewer inputs that can end up in the waterways and it is less costly for the farm,” Archuleta said. “If we can cover the soil, sequester those nutrients and use the right soil tests, we are using fewer inputs.”

“Some people are looking at one practice like cover crops or no-till, but when you change one thing in

your cropping system it will affect the rest of your system. You may have to adapt your nutrient management to compliment the no-till or you may have to look at your crop rotation and see how cover crops will integrate into that. You have to think about a systems approach to get the most benefit out of the management style we are talking about here,” Fisher said. “I get to spend a lot of time with some of the top farmers around the country who are integrating this system. Farmers have to adapt their management every year and throughout the year. They have to watch the weather and the conditions and make those adaptive management changes throughout the season. When you are talking about the economics of cover crops, you first have to look at how farmers have adapted the management to make those cover crops work the best. And in almost every situation, you find that those producers are showing some really nice net gains when they optimize and integrate these systems.”

One of the most significant drivers of the economic benefits of the cover crop/no-till combination is water management.

“A lot of the benefit comes down to water management. Water makes grain. Cover crops are enabling us to build organic matter and aggregate stability to allow water to infiltrate. Water goes in where the raindrop lands and that is different than hitting the surface and running across the surface and then getting in. With that same organic matter we are then able to hold water. It allows us to manage water better,” Fisher said. “Not only are we allowing it to get in, but we can hold it until grain fill in the hot part of summer. If we can hold an extra half inch or inch for when the plant needs it, that equates to yield and that really helps from an economic benefit.”

The event also featured tips from a panel of experienced farmers, a soil pit discussion and field demonstrations.