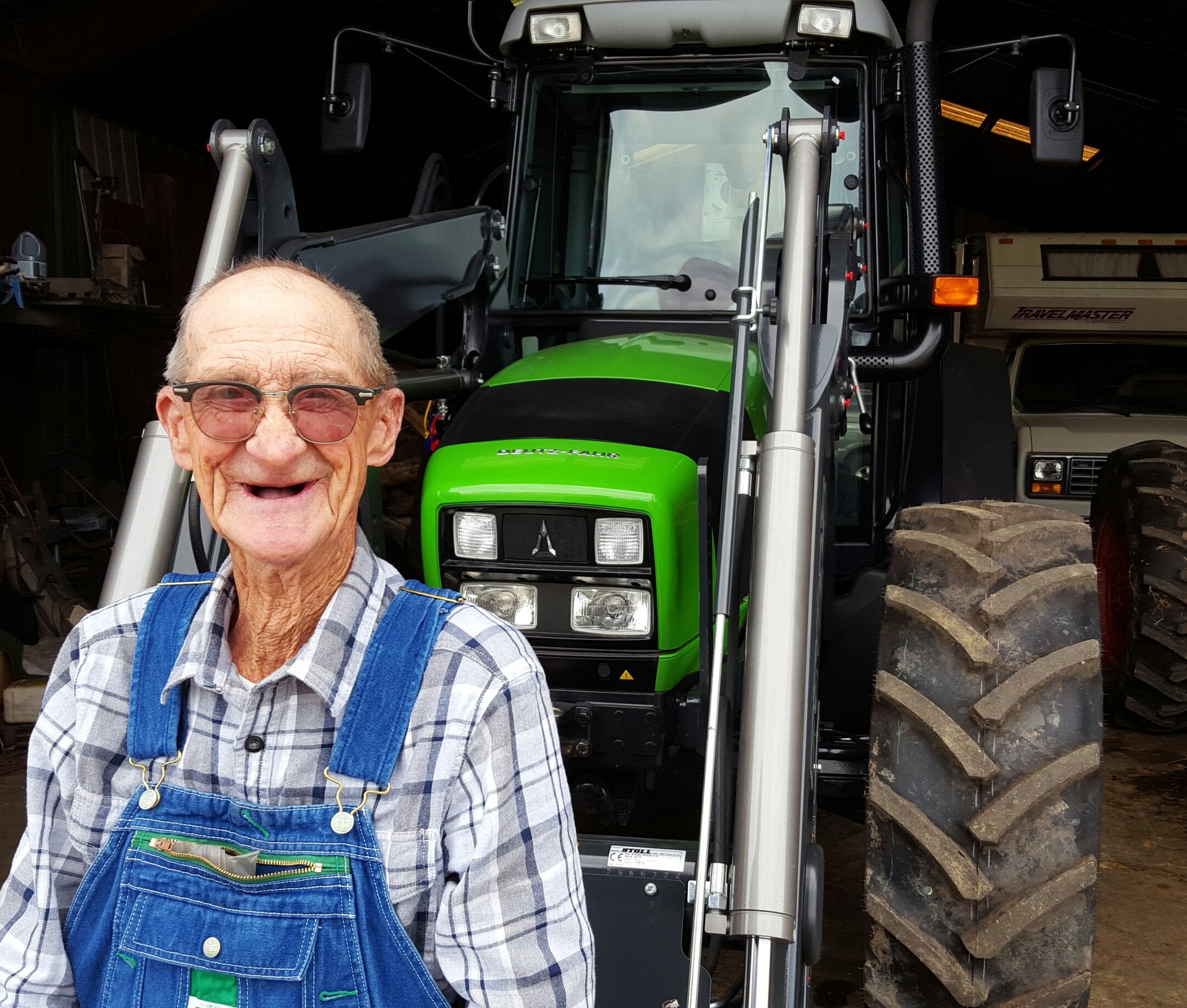 Being an ordinary farmer is what made Grandpa extraordinary

As I write this, there is a greasy DeKalb hat and a pair of Liberty overalls hanging on the wall of my office. Yellow work gloves are tucked into the back pocket of those overalls and a big pair of pliers is nestled in the side pocket. The front pocket of those bibs is filled with a blue handkerchief, a pouch of Half & Half tobacco and a corn cob pipe that has been charred by a thousand matches and smells like most of my childhood memories.

These items and those memories are what I have left from my Grandpa “Popeye” Thompson, who recently passed away, leaving a gaping void in the Licking County agriculture community.

Some of my greatest childhood moments happened when someone would connect the dots and figure out that I was Popeye’s grandson. The smiles on their faces made me realize that they had, in one way or another, been impacted by knowing my Grandpa. It made me feel so proud because you could tell that, because they thought so much of him, they thought I must be pretty special too.

The reality of his passing hasn’t completely set in because he is always in my head, so to speak, even when he was living. I always hear him telling me to work smart, not hard and that if you always tell the truth, you’ll never have trouble remembering what you might have said. As I made my last few visits to Grandpa’s, I remembered the lessons that he taught me. Most of them were learned by just simply watching how Grandpa lived, how he treated others and how others treated him in return.

As with most farmers, Grandpa was all about taking victories in stride and losses with grace. One of the prime examples of the latter was when he and Grandma lost their house in a fire. Before they were even allowed to search what was left of their home after the embers burned out, neighbors from every direction came together and built what is still affectionately known as “The Barndo” — a 500 square foot make-shift condominium that was nothing more than walls and a ceiling made of plywood in the back of the barn. This simplistic suite was complete with a firewood stove, running water and an outhouse. As usual over their 60 year marriage, Grandpa and Grandma made it work just fine as the new house was being built. That show of support from the whole community was proof enough for me that my Grandpa was a good man.

Who wouldn’t want to learn from a man that like? 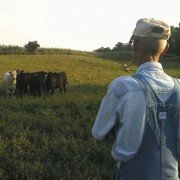 As he approached his 70s he was looking for a way to leave what he had left, about 200 acres of land, to his 5 kids. His land is pretty nicely placed on a main state route and he was contacted multiple times to turn his corn and bean fields into housing developments…and he turned down every offer. Seeing more blacktop than green grass was not what he wanted. He wanted just the opposite and that is exactly what he was able to do when he made a business deal to turn his land into a golf course. After two years of construction, The Legends of Locust Lane was opened for play. The course was made up of 18 challenging holes with undulating hills, perfectly placed bunkers and lush greens.

That golf course was exactly what Grandpa wanted. A viable business that would be able to give all five of his kids a cash flow for years to come and something that could even be passed down to my cousins and me to continue on down the line.

Tee times were filling up and business was pretty good in a short period of time. Then, seven years into the venture, the Ohio Department of Transportation decided that a new state route 161 was going right through his property and taking out half of the 18 holes. The Legends at Locust Lane was no more and after 40 years of farming that ground and turning it into something viable, everything Grandpa knew…was gone.

For many this would make the blood boil, but I learned a valuable lesson by watching how Grandpa handled such a difficult situation. As the surveyors were placing markers on the piece of Grandpa’s land that was soon going to be a four lane highway, they had some difficulty getting to some parts of the property. To help them get their job done, Grandpa lent them his tractor. You could tell the workers were a bit uncomfortable with how nice Grandpa was to them, considering the circumstances. That’s just the kind of man he was. 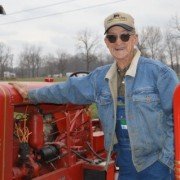 After death, we talk a lot about legacies. And leaving a legacy can mean many different things to many different people. For Grandpa, a legacy wasn’t weighed by how much money he left behind, how much land he farmed or what kind of tractors he had (okay, it might have been a little about the tractors). His prized possessions were two Eagle Cs that were one serial number apart. One was his father’s and the other one he found for sale in a tractor magazine, inspiring him to drive to Wisconsin to reunite the “Long Lost Brothers.”

For him, legacy was about family. And not just family, but how he raised his family. Over the final days of Grandpa’s life, I witnessed his five children and Grandma come together with the purpose of giving him comfort and strength. Through that process, they also gave him the certainty that everything would be alright after he left.

Legacy is also measured by a man’s character, and not only by his character but by his characteristics as well. All of his grandkids have some of Grandpa’s characteristics. The curiosity and willingness to learn and his respect of livestock and nature as a whole, his tender heart that loves unconditionally, as well as his laughter, love of the outdoors, determination and the discipline to see every project through and the ability to tell a good story, all live on through the generations.

Legacy for Grandpa wasn’t about being a farmer, but about the way he farmed. Grandpa loved the land and left it better than he found it. Grandpa believed in helping others and he always took others’ concerns and put them before his own. He believed in helping the next guy down the line and giving the younger farmers a hand. I know a few Licking County farmers who will tell you that some of the best advice and some much needed help in a difficult time came from Popeye Thompson.

I know that what is left of him here on Earth is nothing but the shell that Grandpa used for his 79 years, but what remains of him can tell a story just about as good as he could. I will always remember the well-worn, grease stained hands that bled at one point or another from working the ground or rigging up some implement to make it just right for his uses of it and the wrinkled forehead from concerns of too much rain or not enough, depending on the year.

The lines around his eyes formed from the smiles when a new Grandchild made their first visit to Sunday dinner or when grain or cattle prices made farming more fun than usual. His thought-filled eyes looked right into yours when what he was telling you was most important, waiting for you to acknowledge, “Yep Grandpa, I got it.” 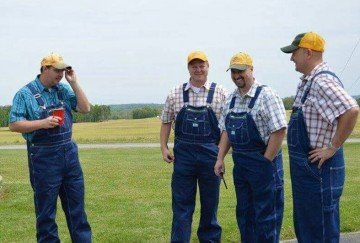 As a farmer, Grandpa planted many seeds. Millions upon millions on his Locust Lane Farm in Alexandria, and many more seeds that grew in the form of other farmers who needed a hand, friends that needed an ear and strangers that didn’t know they needed anything until they met Grandpa (and he was happy to oblige).

Over the next few weeks I am sure I will hear about the many seeds that Grandpa had sown in the stories that I will hear when I proudly introduce myself, as I always will, as Popeye Thompson’s grandson.

Thank you, Grandpa. We’ll see you down the road!