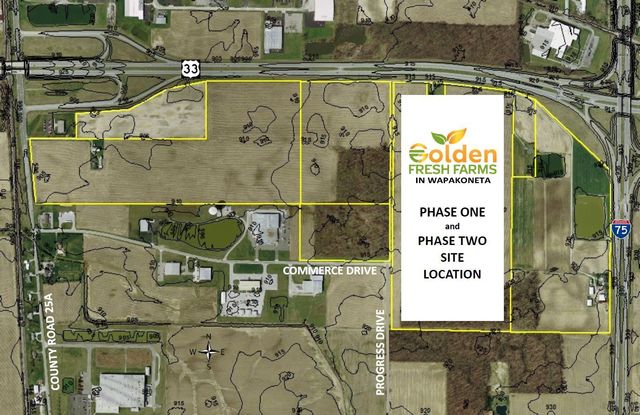 Golden Fresh Farms, a Canadian-based company, broke ground on a $22.5 million, 20-acre greenhouse yesterday in the West Central Ohio Industrial Center, in Wapakoneta near I-75 and U.S. 33. The groundbreaking represents just one phase of the project, which will expand over the next several years.

They will start off producing three different varieties of tomatoes and expect to plant by Dec. 1. Golden Fresh Farms has already contracted with local groceries in Ohio. They will be producing their tomatoes in the “off peak” season of field tomatoes. They are currently doing business in America, already purchasing fertilizers from U.S. companies.

The facility will use wastewater and drip irrigation — there will be no waste. They will also be set up to collect rainwater. Their technology is very cutting edge, and tours will be available whenever anyone wants to tour.

The manager for the Ohio facility — their first one in the U.S. — is Paul Mastronardi. He is moving to Wapakoneta. Construction on phase one will begin soon, and they hope to have the greenhouse up and running by December. Phase one will also add 52 new full-time jobs with an annual payroll of $1.9 million.

The operation will be fully integrated from seeding through harvest, packaging and shipping. The Ohio facility will better allow Golden Fresh Farms to get a fresh end product to their U.S. customers.