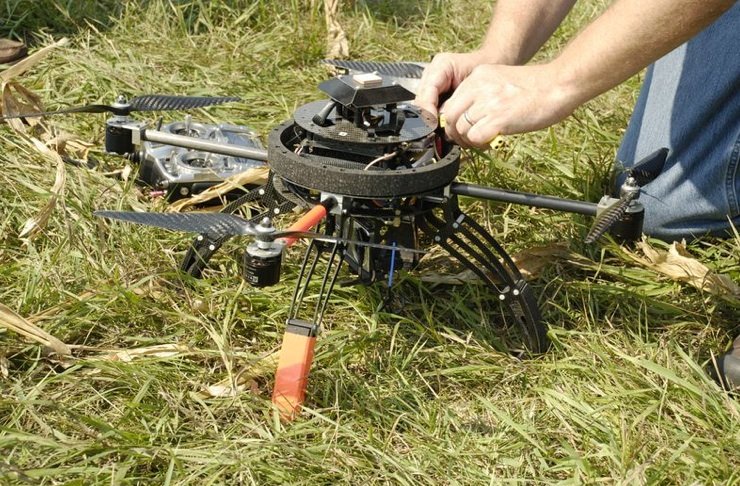 Drones in agriculture ready for takeoff with new FAA rules

The Federal Aviation Administration (FAA) recently finalized the first operational rules for routine commercial use of small, unmanned aircraft systems (UAS) — a long-awaited development by many groups, agriculture included. The first approved commercial UAS flight over land by the FAA was in June of 2014. The landscape of the booming aerial technology has changed dramatically and expediently since.

“We are part of a new era in aviation, and the potential for unmanned aircraft will make it safer and easier to do certain jobs, gather information, and deploy disaster relief,” said Anthony Foxx, U.S. Transportation Secretary. “We look forward to working with the aviation community to support innovation, while maintaining our standards as the safest and most complex airspace in the world.”

According to industry estimates, the rule could generate more than $82 billion for the U.S. economy and create more than 100,000 new jobs over the next 10 years. The rule regulates several factors of UAS, better known as drones, for those conducting non-hobbyist operations including the following:

The new regulations also address other operational limits, such as prohibiting flights over unprotected people on the ground that aren’t directly participating in the UAS operation, a parameter similar to those of full-sized crop dusters — airplanes that are considered restricted aircraft.

The American Farm Bureau Federation (AFBF) said they would continue working with the FAA to tweak certain restrictions in the rules. Farm Bureau suggested several changes including not requiring drones be operated in the user’s line of sight or not operated directly over people, both suggestions that were not adopted.

“Politico” reported R.J. Karney, AFBF’s director of congressional relations, gave the FAA credit for building in flexibility by allowing waivers to those restrictions. He hoped it would help build a case for more fine-tuning of the rules to help the technology take off for farmers and ranchers. Agriculture could make up almost 80% of expected commercial drone use. Drones could map terrain or monitor fields for pest and disease pressure, just to name a few of the expected uses.

The FAA is offering a process to waive some restrictions if an operator proves the proposed flight will be conducted safely under a waiver. An online portal will be available to apply for these waivers in the months ahead.

“With this new rule, we are taking a careful and deliberate approach that balances the need to deploy this new technology with the FAA’s mission to protect public safety,” said Michael Huerta, FAA Administrator. “But this is just our first step. We’re already working on additional rules that will expand the range of operations.”

Under the final rule, the person actually flying a drone must be at least 16 years old and have a remote pilot certificate with a small UAS rating, or be directly supervised by someone with such a certificate. To qualify for a remote pilot certificate, an individual must either pass an initial aeronautical knowledge test at an FAA-approved knowledge-testing center or have an existing non-student Part 61 pilot certificate. If qualifying under the latter provision, a pilot must have completed a flight review in the previous 24 months and must take a UAS online training course provided by the FAA. The TSA will conduct a security background check of all remote pilot applications prior to issuance of a certificate.

Operators are responsible for ensuring a drone is safe before flying, but the FAA is not requiring small UAS to comply with current agency airworthiness standards or aircraft certification. Instead, the remote pilot will simply have to perform a preflight visual and operational check of the small UAS to ensure that safety-pertinent systems are functioning property. This includes checking the communications link between the control station and the UAS.

Although the new rule does not specifically deal with privacy issues in the use of drones, and the FAA does not regulate how UAS gather data on people or property, the FAA is acting to address privacy considerations in this area. The FAA strongly encourages all UAS pilots to check local and state laws before gathering information through remote sensing technology or photography.

Part 107 will not apply to model aircraft. Model aircraft operators must continue to satisfy all the criteria specified in Section 336 of Public Law 112-95 (PDF) (which will now be codified in Part 101), including the stipulation they be operated only for hobby or recreational purposes.

Jamie Nafziger is a partner at the international law firm Dorsey & Whitney. She’s been working with businesses on the rules and regulations surrounding drone use.

“In a move that will likely accelerate the already booming drone market, the FAA’s new small unmanned aircraft rules significantly ease the burden on businesses which want to make basic commercial uses of UAS,” Nafziger said. “However, the rules still require FAA pre-approval for more extensive commercial uses.  For instance, if someone wants to fly a drone over their farm for use in precision agriculture, these new rules make doing that much easier.  On the other hand, if someone wants to fly over crowds of people or carry significant payloads, they will still need a waiver from the FAA as they have since September 2014. Use of drones to inspect pipelines, aerial power lines, or mines, will also require a waiver unless it can be done in line of sight from the ground or from a moving land vehicle in a sparsely populated area. It doesn’t look like commercial package delivery outside the line of sight will be permitted at this time — the FAA says in its rules that it will not be granting waivers for this type of commercial use.

“I’ve had clients ask me if they can hire their nieces or nephews to fly drones for their business and have had to tell them no, unless their niece or nephew is a pilot. Now, under the new rules, I can say ‘yes, so long as their niece or nephew is at least 16 and gets a remote pilot certificate with a small UAS rating (and follows the new UAS rules, of course).  So, we should have lots more eligible operators over the next few months.”

Master Gardener Volunteers from across Ohio grew nearly 80,000 pounds of produce in 2020 statewide …