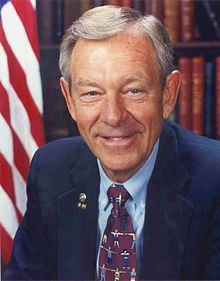 George Voinovich, former Ohio Governor and U.S. Senator, died in his sleep at the age of 79 on June 12.

Voinovich was known as a true friend of Ohio agriculture and was a regular attender and promoter of the Ohio State Fair and his home state.

“George was the long-time mayor of Cleveland — a city kid, but he loved the Ohio State Fair! He loved being with the 4-H kids, working the bidders at the Sale of Champions, staying overnight with a farm family, and being a part of Ohio’s great agriculture community. After he left the Governor’s Office, he would continue to come to the Ohio State Fair with grandkids every summer. He was so proud of the Voinovich Livestock and Trade Center on the Fairgrounds,” said Mike DeWine, Ohio Attorney General who served as Voinovich’s Lt. Governor. “George took great pride in sharing Ohio’s unique places with others.  He had a passion for promoting Ohio tourism — from the banks of the Ohio River to the shores of Lake Erie.  He loved our state.”

The current Ohio Governor recalled the leadership of Voinovich.

“He was a unifier who thought outside the box, never gave up and worked hard for the ideas he believed in up until the very end of his life. Thanks to that leadership he saved Cleveland, governed Ohio compassionately and responsibly and was a candid voice for reason in the U.S. Senate.  I am proud to have known him and grateful for what he did for our state and nation,” said Gov. John Kasich. “To his wife Janet, his children and his many grandchildren, my family sends our condolences and heartfelt prayers at this difficult time, and on behalf of Ohio I send my gratitude for sharing this wonderful, dynamic man with us for so many years.”