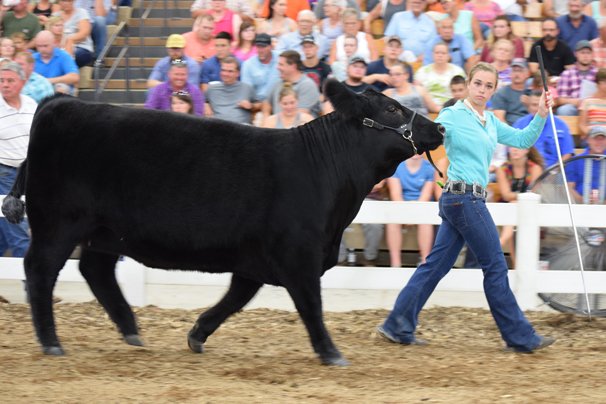 Hannah Topmiller from Warren County is one example of the expanding number of youth exhibitors being highlighted in new programs at the Ohio State Fair. Topmiller was the overall Beef Outstanding Breeding Exhibitor. Photo by Meghan Bruns.

For many years now, the Outstanding Market Exhibitor Program has rewarded and recognized junior market exhibitors who perform the best in the show ring, skillathon and showmanship with funds generated in the Youth Reserve Program. Now, there are increasing efforts to highlight the hard working youth exhibitors beyond the market shows with more emphasis being placed on the areas of junior breeding livestock at the Ohio State Fair.

Austin Hunker from Huron County and Hannah Topmiller from Warren County are examples of the expanding number of youth exhibitors being highlighted in new programs at the Ohio State Fair. Topmiller was the second place overall Beef Outstanding Breeding Exhibitor. Austin Hunker of Huron County was the first place winner. In the swine barn Seth Fearon from Darke County, Lindsey Dore from Delaware County and Devon Snyder of Clinton County were the top three Outstanding Breeding Exhibitors.

“We’re now a couple years into a new program — the Premier Breeding Exhibitor. It is an opportunity for the kids to garner recognition in showmanship, how they place in the breeding show and the skillathon,” said Bill Tom, Ohio State Fair Beef Department director. “It allows us to expand into the breeding program and get more kids involved. The steer exhibitors have always gotten the premier exhibitor award and it is a nice event and I thought it was important that the kids in the breeding program had an equal opportunity, so we started that program two years ago. And we are on our third year for the Best of the Buckeye. We have that for our heifer and steer programs for any cattle that are born and bred in the state of Ohio that exhibitors qualify for scholarships and three categories of prizes and points. We have tried really hard to make the program much more appealing to the average 4-Her..”

A similar effort is being implemented for junior sheep exhibitors.

“We created the Ohio Sheep Improvement Association LEAD Council to have youth programming for the sheep industry with sponsorships and breed association contributions going to highlight the youth across all segments of the industry,” said Roger High with OSIA. “LEAD Council is about the kids and the money we generate through that goes to them. We are starting a new era with the breeding sheep to raise money to get it out to the kids through showmanship, the breed champions and reserves or the supreme champions. Hopefully it will grow and it will become as big as what we see with the market lamb program.”

There has also been plenty of excitement in the hog barn with new efforts to benefit a broader spectrum of youth exhibitors there as well.

“The exhibitors were extremely excited. This was the first time we have ever been able to pick the top 10 outstanding market exhibitors for the breeding kids. This has been something a long time coming. The Supreme Champion Gilt exhibitors received a popper courtesy of EBY and the reserve champions received a show box. They have gotten special picture certificates and we have upgraded to showmanship chairs and jackets,” said Michelle Kuhlwein, Ohio Youth Swine Committee chairman. “It has really grown. When we started this seven years ago I never dreamed that we would be able to put $50,000 in a single fair, but that is exactly what we did this year. We went from 10 sponsors when we started to 32 sponsors and going strong.”

“One of the things we believe in is the future of our youth. We are touching all of the kids in the barn and that is one of the things that makes this special. We are doing things for the several hundred kids in the barn rather than just concentrating on the champions,” Kuhlwein said. “I can’t believe the positive feedback we have gotten. When we gave away that popper the other day to a young man with the Supreme Champion Gilt he was so happy. That joy in his eyes makes this all worthwhile for me. Then at the end of the fair, before we picked the champion, the top 30 in the barn and the top 10 breeding kids were recognized. I wrote out checks for over $13,000 in premiums those kids will take directly home with them. The champions are great, but in my eyes all of the kids who come here and do this are champions, not just the ones who get the banners.”