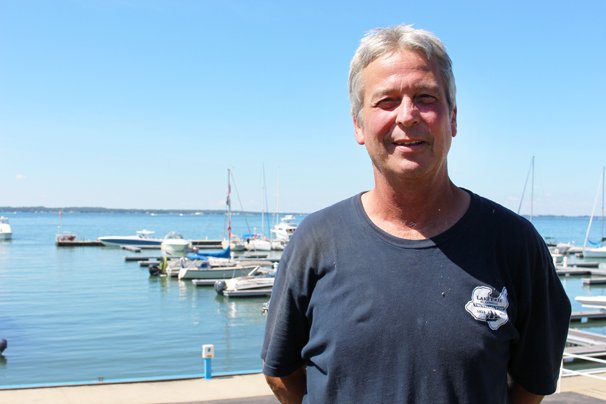 Gary Finger stands by the harbor outside the Village Pump on Kelleys Island.

It’s a surprise for many to learn that Ohio boasts its own share of sizable islands on the state’s inland sea — Lake Erie. And though physically removed from the mainland, animal agriculture still thrives there.

Kelleys Island, boasting an area of 4.41 square miles and a population of 312 as of the 2010 census, has its own share of farm life. Gary Finger, along with his wife Jackie, own and operate The Village Pump, a restaurant and all-around community staple. They also raise some of the livestock that call the island home.

“I don’t ever question it. I totally enjoy it. But I’ve lived here my whole life,” Finger said of raising livestock on an island. “It’s good for me. That’s all I do is take care of people all the time, so it’s fun to take care of our own animals too.”

Gary got his start on the island after his brother bought the Village Pump in 1969 and he convinced his parents to let him move in above the restaurant in 1972.

“I graduated from high school here. We were the largest graduating class in 10 years,” he said. “I like to tell everybody I was really proud of the fact that I was second in my class. But I was last in my class too.”

Gary and Jackie eventually met, fell in love and got married, buying the Village Pump in the early 1980s. Jackie brought her love of livestock to the island.

“My wife had horses her whole life living Pennsylvania and Medina. It wasn’t until shortly after we bought the Pump that we got our first quarter horse. Then that led to the second animal and the third animal,” he said.

The snowball effect has led to a hobby farm of sorts including horses, donkeys, alpacas, and ducks, with new hooves joining the Finger family from time to time.

“We just recently got two new colts. We got a six month old colt right before the ferry boat quit running in December and then we got a half brother right when the ferry boat started,” Gary said.

While the island life has clear benefits, Finger said there are some major challenges that come along with the lifestyle, especially with animals along for the ride.

“Those are the challenges — getting feed, veterinary support. Even with our dogs and cats, our small animals. Even with people, we have to pretty much take care of each other because we don’t have doctors and it is the same with the large and small animals,” Gary said. “Ohio State of course is our fall back with our large animals and our small animals.”

Accessible only by ferry and airplane in the best of weather, the harsh Ohio winters make traveling by lake impossible for months when the water freezes, all but cutting off the island’s year-round dwellers from the rest of the world.

“Well it’s nerve racking. Because you really know then you’re limited. Now a couple veterinarians may come by airplane. You pretty much just can’t transport anything. You’re on your own,” Finger said. “You just have to take time in getting prepared and getting everything brought over. We fly over a lot of freight but there are a lot of things you can’t fly over. So a lot of the stuff you have to put up and try to be prepared. It’s not as easy for everybody. It’s quite the challenge to be able to afford, feed and care for the animals and foresee what you need to bring you in the way of supplies. They can’t fly batteries, they can’t fly oxygen — things like that. And we don’t always know when the last ferry is going to be. Sometimes it’s the middle of December. Sometimes it can be a week into January depending on the ice. Once the ice gets really bad, then of course they can’t run the boat anymore. And then when it starts up again you don’t know. Some years, not until April.”

With their diverse array of livestock, Jackie and Gary face a broader array of challenges in caring for the animals through the winter.

“We have had as many as 11 alpacas but we’ve thinned our herd quite a bit. The challenge with that recently has been we moved them in with our horses. We had them at our house but we thought it would be better to have them all together. We learned the hard way about the meningeal worm. The meningeal worm affects them neurologically. It will come through the feces of the white tailed deer,” Gary said.

Unfortunately, such island hardships don’t always have a storybook ending.

“Right before the ferry started this spring we had to put one down. The vet came over and helped us,” he said. “Now I’ve got two I’m battling it with. I thought we got ahead of it but we’re falling behind.”

Though sometimes challenging, having livestock on the island offers a unique island calming effect, especially in the high stress world of restaurant and business ownership. The Fingers’ busy peak season includes the end of June, July, and the beginning of August.

“The animals are our little getaway from here. We don’t leave this much. After 33 years, Jackie and I are married to this,” Gary spoke of the restaurant. “But it’s sort of nice to have that place to go to because regardless of how busy we are, I know I have to go take care of the animals. Our whole season is just a couple months so the rest of the year it’s a lot more relaxed — we get to spend a lot more time with them.”

Being kept by the full-time requirements of the Village Pump, the Fingers are also pushed to make sure hay and feed requirements are always ready to go. The Fingers do not bale on the island, but have friends that do. They also get about 200 bales at a time from the mainland throughout the warmer months, which they are sure to store up for the winter.

Overall, the island lifestyle makes the roughly 125 people that live there throughout the year a family of sorts.

“Here on the island, even though we’re not all related truly by family, we’re all like a family and so it’s nice because we all look after them,” he said.

How do animals fare on the ferry?

“In the trailers, they’re not too bad. It’s nicer if it’s a little bit rougher because they have to keep their balance just like on the road versus at a stand still. But most of them handle it fairly well,” Gary said.

Jackie has a hunch as to why there aren’t troubles on the ferry crossing.

“It’s because they know they’re moving to Kelleys Island for their new home,” she said.