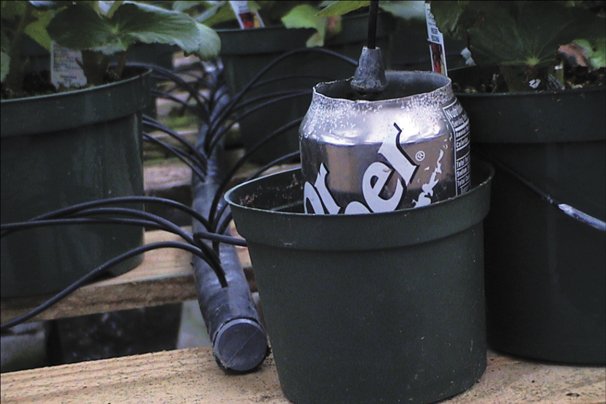 Preparing your irrigation system for the growing season: Part I

A good time to think about your irrigation system is before the spring growing season when heavy water demands arise. An irrigation system working at peak efficiency should deliver the right amount of water, at the right time, and with the lowest possible inputs of labor and energy. Unfortunately, peak efficiency is not always the case. Irrigation equipment such as pumps, pipes, valves, and nozzles are subject to ageing and degradation. Slow degradation such as a worn nozzle, clogged filter, or mineral deposits in pipes is not easy to detect. Degraded water delivery equipment can cause insufficient watering that result in non-uniform plant growth, increased pest pressure, waste of water, and pumping energy. Prior to the spring season, it is a good idea to inspect the irrigation system’s components. Make sure the system is clean of debris, mineral buildup and biological contaminants. Also take time to research and consider technology improvements to further conserve resources such as labor, energy, water and fertilizer chemicals.

Pipes and other physical components of the irrigation system are responsible for transporting water from the source to the plants. Distribution and delivery components should be checked for obvious visual damage such as leaks and tested for proper functionality. Quick patch jobs made during the previous season should be fixed in a more permanent manner. Other equipment that should be tested for functionality may include valves, filters, controllers, and moisture sensors.

Pressure gauges and flow meters provide invaluable information about water use and condition of the irrigation system. Make sure these devices are functioning and calibrated. Line pressure influences the flow rate and distribution pattern from nozzles and emitters. Backflow preventers require a pressure drop for functionality. Excessive pressure drop across a filter indicates a clog. Pumps operate at specific pressures to meet the needs of nozzles or emitters. High pressure at the pump may indicate a restriction in flow. Low pressure from the pump can be an early warning sign of line leakage, or/and pump failure. Pumps operating outside of their designed pressure range are less efficient and costly.

Expansion in a growing operation may require expanding the capacity of the irrigation system. Addition of crop zones that need more water than established zones can exceed a pump’s ability to simultaneously provide adequate flow and maintain adequate pressure at nozzles/emitters. This is because increased flow rate in pipes, and longer irrigation line increase the pressure loss in those pipes, thus less water can be delivered. Prior to expanding, determine if the pump is capable of delivering the needed flow rate at a pressure required by the nozzles/emitters. Remember to factor in pressure loss in water lines at the required flow rate. It is also possible to add irrigation zones so that multiple crop zones can be watered at different times. This will be discussed at a later article.

Nozzles and emitters wear out over time or can be clogged by debris, mineral deposits, and biofilm. Debris flowing through nozzles slowly erodes and enlarges the orifice. A worn nozzle orifice will allow greater flow and the pump may not be able to maintain the required pressure as a result. This affects the flow at other nozzles and the overall distribution uniformity. Micro irrigation emitters tend to clog from debris or biofilm. Pressure compensating emitters will wear out over time as the diaphragm inside the emitter changes in elasticity. As both nozzles and emitters fail, some plants may become over-watered or under-watered, consuming extra water and energy or drought stressing the plants.

Nozzle ware can be checked by comparing a used nozzle to a new one of the same make and model. Insert the shank of an appropriately sized drill bit into the orifice. The bit should fit the same in the new and used nozzle. The distribution pattern can be visualized by placing small containers under sprinklers nozzles in a grid-like fashion. Run the sprinklers for a given amount of time and compare the volume in the catch containers. Similar to sprinkler nozzles, micro irrigation emitters can be checked by placing a catch container at each emitter. Measuring flow volume over a given time will indicate clogged or partially clogged emitters. There should not be more than a 10% variation in flow from nozzles or emitters along the same lateral.

Cleaning the irrigation system is important for plant health and proper functioning of components. Biological contaminants can spread disease. Debris such as sand erodes nozzles and damages valves. Water with a high level of dissolved salts can precipitate solids inside pipes and emitters. These dissolved minerals come from either the water’s source or from nutrient injection. For example, source water over pH 7.5 and over 100 parts per million bicarbonate can precipitate minerals. Three major causes of water line clogging are 1) iron bacteria (generally reddish), 2) manganese bacteria (generally more black), and 3) iron and manganese sulfide.

The first two problems can be addressed chemically by periodic acid/chlorine treatment of water. It is also effective by pumping the water into a reservoir and aerate (i.e. oxidize) followed by precipitate removal with a filter. The iron and manganese sulfide problem can be mediated by aeration, acidification, and chlorination then precipitate out any remaining sulfide. Keep in mind that source water composition can change over time so testing the water at regular intervals is a good idea. Maintain system cleanliness by flushing and disinfecting when needed and cleaning filters throughout the system on a regular basis.

This article has focused on delivering the right amount of water for effective and efficient irrigation. A part II on the same theme will provide a few pointers to assure efficient nutrient uptake, and quality of recycled water, and a few new technologies to making improvements and upgrades to your irrigation system. Upgrades can conserve water, save energy, reduce chemical use, and reduce runoff.

Dr. Peter Ling is an Associate Professor and Extension Specialist in the area of controlled environment plant production. He can be reached at 330-263-3857 or ling.23@osu.edu. This column is provided by the OSU Department of Food, Agricultural and Biological Engineering, OSU Extension, Ohio Agricultural Research and development Center, and the College of Food, Agricultural, and Environmental Sciences.

Luke Power is a Research Associate with Dr. Ling.