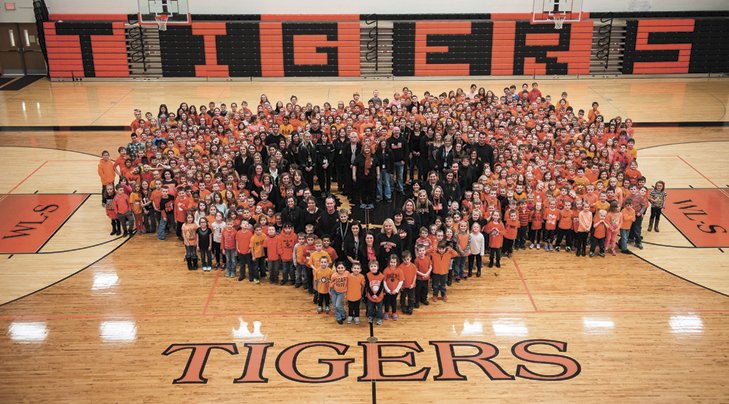 There was incredible community support, including from the elementary students, for Logan Cole and his family after he was seriously injured in a school shooting in January at West Liberty-Salem. Photo provided by WL-S.

Featured on the news, far too often, are horrifying glimpses of evil at work in the world, but even so, the relative safety of day-to-day life can be easily taken for granted. So it was in the rural west-central Ohio community of West Liberty where residents never expected something so bad to happen so close to home. But the community got a ghastly reminder of the fragility of life the morning of Jan. 20, 2017.

According to the WPKO-WBLL website peakofohio.com, the Champaign County Sheriff’s Office reported the following, students were preparing for class at West Liberty-Salem schools, about an hour’s drive west of Columbus when at just after 7:30 a.m., 17-year-old Ely Serna allegedly snuck a disassembled Mossberg 500 12-gauge, pump action shotgun into the high school. Serna reassembled the gun, firing several shots, including shooting fellow student Logan Cole, 16, twice at random in the bathroom.

In the weeks since the incident, the community has rallied to support its young people and the Cole family, which posted regular updates on social media of their son’s recovery.

Just under a month later, the cheers of the West Liberty-Salem students and staff were heard echoing through the hallways as Cole, who was nearly killed, returned to school on Feb. 13. Though he still sported evidence of his ordeal, including a neck brace, he continued to work to make a full recovery.

Though the community can hardly begin to understand the reasoning behind such things, what happened can be examined and lessons can be learned. The school staff had participated in an Alert, Lockdown, Inform, Counter, and Evacuate (ALICE) program with the ALICE Training Institute and recently had drills for the students. The training has been credited with helping students and staff to properly respond to the situation.

“Although we never thought it would happen at WL-S, we began ALICE training about 3 years ago,” said Kraig Hissong, WL-S superintendent. “This training was very intense and our staff and students learned important active shooter responses depending on the situation that could occur. I remember staff actually breaking door handles, etc. during the training. At the time I thought it might have been a little too much, but looking at it now, it prepared our staff to respond as needed. We have continued to update ALICE each year, however, with shorter training. In the future, we will continue to make ALICE training an important part of our emergency action plans.

“Another important take away was the importance of building relationships with your first responders. During the actual shooting, the first responders that arrived on the seen were some of the same law enforcement officers that led us through our ALICE training or come to athletic events. This allowed for a better level of trust and communication and made organizing the response to the shooting and reunification with families operate more smoothly.”

Preparing the facilities is also important.

“From the event, we realized how important it is to be able to escape from classrooms without having to enter the hallway where a shooter is likely located,” Hisson said. “Escape from our current windows was difficult and could have resulted in the loss of precious time to evacuate the building. We have already researched and found a suitable solution that will provide one emergency egress window per classroom. This window will easily fully open with one motion in an emergency situation. All schools in the state of Ohio should have an emergency egress window that is quick to operate in each classroom or student occupied area. Also, doors need to be able to be locked from the inside of the classroom without a key. This would allow a student or any adult to lock the door in the event of an emergency. Each lock should have an indicator that tells the people inside that the door is locked and secured.”

“Involving first responders and law enforcement in safety planning helps when it becomes time to implement a safety plan including reunification of students and parents offsite,” Hissong said. “Make sure that families understand that it is best not to come to the school when an emergency situation occurs. This can make movement for first responders more difficult and slow down their arrival on the school site. We were very pleased with how patiently our families waited at Lions Park until we could reunite them with their children.”

Mallary Caudill was an OCJ/OAN student reporter for the 2016 Ohio FFA Convention and is currently a student at West Liberty-Salem High School. She agreed to share with us her thoughts from that fateful day.

What seemed to be a normal Friday for most WL-S students quickly changed to a scary reality, which we never thought would hit our small town.

I was fortunate enough to not be too close to the incident. In fact I didn’t even hear the shots. Many, and most of my friends, were in the high school wing, and were alerted more quickly by the actual gunshots. Our K-12 campus is all in one building, and my first period class, French, was in the middle school wing. I walked to class just like normal, sat down at my desk, and got ready to start the day as I waited for the bell.

Due to the construction at our school our PA system often doesn’t work in certain areas of the building. So it wasn’t a surprise that our morning announcements never came on, my teacher simply opened the class with a statement, which was quickly interrupted by the PA system clicking on.

What we thought would be the Pledge of Allegiance, were actually the words, “Lockdown, active shooter in the high school wing.” We commenced our ALICE (alert, lockdown, inform, counter and evacuate) training procedure: turning off the lights, pulling the blinds, and barricading the door with desks and chairs.

We thought that it was just a drill, seeing as in drill situations the same announcement is made. I had a sort of eerie feeling about this though, since we had no bell, but we started the day with this announcement.

After about two minutes of sitting in the corner of the classroom, another announcement came on, “This is not a drill, there is an active shooter in the high school wing.” After about 30 seconds, a teacher’s voice shouted in the hallway for us to run. My classmates quickly tore away the desks and chairs that barricaded the door, and we ran down the hallway out the door toward our land lab, and through the land lab, to nearby houses, about a mile. We then waited at nearby houses, scared for our lives and classmates, as we watched police cars surround our school.

We had no idea that the shooter had been shooting in the high school wing, where my sister, who was two classrooms down from the incident, heard the first two shots. Again because of construction, she simply thought that it was a construction worker dropping something. Her teacher walked out into the hallway to see what it was. He saw one of the other teachers running and shouting “shooter” out of the restroom. He came back into his classroom and told the kids to break windows and get out. Kids kicked and threw objects at the windows to break them; some cranked them open and wedged themselves out, and got all the students out. My sister ran through a muddy corn field for about a mile, and because of the mud, literally ran out of her shoes. She ran the rest of the way barefoot to another nearby farmhouse. She called my mom as she ran and my mom got there as quickly as she could.

As scary as the situation was I am so happy that all of my fellow classmates are OK. Even Logan, the victim who was shot in the bathroom is healing and it is hoped he will make a full recovery.

West Liberty- Salem is so fortunate to have the staff, students, and the law-enforcement we do. God was evident during this day, as many miracles were performed in sparing the lives of the students and staff. Our small, rural community of less than 2,000 has been blessed by support from surrounding communities all over the state of Ohio, as well as other communities in other states.

Many schools wore orange and black to support us on their days back to school (after the event). Many FFA chapters reached out in support as well. We have a long road of emotional healing ahead of us, but one thing is for sure — we are a community, a family, and we will get through this together.

One of those miracles was that the first responders on the scene, though not as familiar with gunshot wound victims as other more urban districts, found themselves thankful for new gunshot kits that they had been equipped with just weeks before. The head paramedic on scene said that Cole would surely not be alive today if it weren’t for that blessing.

The Serna family refers to that of the shooter — it’s not a typo. The Cole family has astounded the community with their message of forgiveness following the shooting that left their son with a number of surgeries left to undergo.

Courts are currently deciding whether or not to try shooter Ely Serna — an honor roll student that was involved in wrestling — as an adult. He is facing 13 charges, including two counts of attempted murder. No motive has been described.

The Cole family and the students of West Liberty-Salem have also gotten broad support from around the area. Though the surrounding communities are highly territorial by which team they root for on Friday nights, numerous schools left their individual colors behind to don black and orange, the colors of the West Liberty-Salem Tigers, to basketball games. Schools around the area have taken assembly pictures wearing Tiger colors to show their support, with a number of local businesses sending profits from certain nights to benefit those harmed.

Shortly after the shooting, Logan’s father Ryan Cole posted this update on Facebook:

“He remembers the event and one of the first things he asked Julie and I was to pray for the other student involved.”

On what started as a normal day in rural Ohio, Logan Cole ended up with around 70 or 80 shot pellets in his body with two in his spinal canal. He suffered multiple breaks and fractures in his backbone, three broken teeth from his fall to the floor after being shot, and damage to his right lung. And for many in the community, a hero was born.