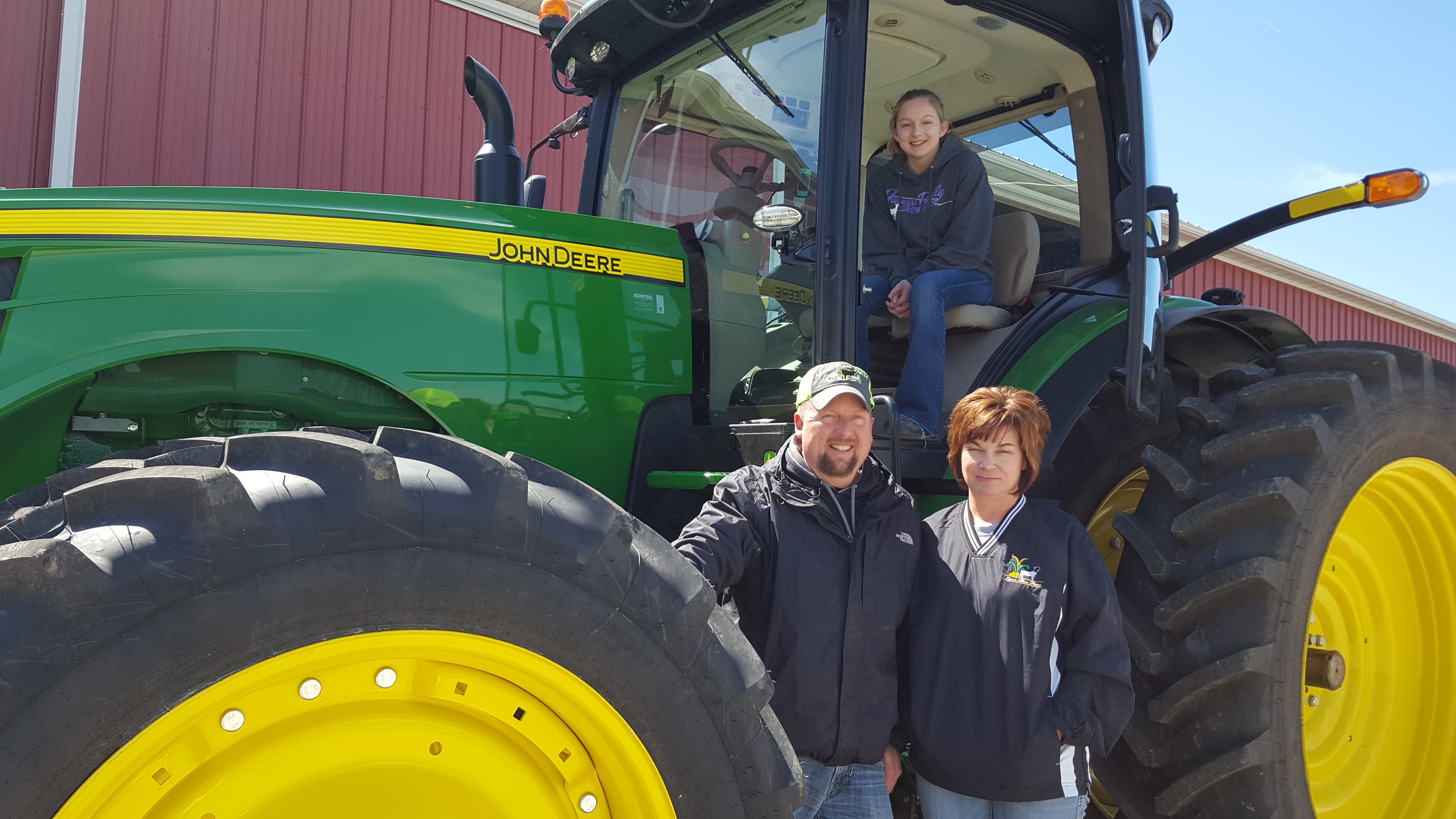 A first generation farmer’s perspective: 25 years of chances given and lessons learned

When thinking about a typical farmer in Ohio, it wouldn’t be out of the ordinary to find out that they might run a couple thousand acres of corn, soybeans and wheat. One would also expect that there is a barn full of livestock right alongside a barn even fuller of machinery and implements. Brent Pence of Lynn Alan Farm is fitting of all of these ag-centered stereotypes, but the one characteristic of this New Carlisle, Ohio producer that may be a surprise is that he is a first generation farmer.

“When I was young I knew that this was the path I wanted to take and I knew all about the obstacles that I would have to face by not having generations of farmers in my family behind me,” Pence said. “I started working for Bob Kaffenbarger in middle school and he had me bailing straw and hay and doing all the odds and ends chores that a young kid could do without messing things up to much. He took me under his wing and explained to me the management side of farming and tried to help me understand what agriculture was all about. It was a very humbling experience and gave me the opportunity to learn so much.”

Time went on and Pence worked his way through high school and college, but the bulk of the education that he still uses on a daily basis was learned off campus. Pence began his farming career with a 123-acre field just down the road from his current homestead. He continued using equipment from the Kaffenbarger farm until he was able to purchase his first tractor – a John Deere 4440.

“I never understood when I was younger hearing all of the older guys saying they wanted their first tractor back,” Pence said. “I had to trade in mine to upgrade to a newer one years ago and now I get it because I’d like to have that one back. I’m still trying to find it.”

With no farm background, no land passed down from generations before and little experience on his own, many thought Pence was crazy and destined to fail. The one thing that Pence had going for him were people willing to take a chance on him.

“We were very lucky because when I first started out, a guy by the name of Jerry McMahan was the very first person that ever rented ground to me,” Pence said. “If he wouldn’t have bet on me when he had no reason to, I don’t know where we’d be today. We had a lot of people take a chance on us who knew we had no established background and didn’t know if we were going to pay the rent. There were just so many things that fell into place to make this life possible.”

In the mid 1990s, as his farming operation grew to 200 and then 300 acres, Pence met his now wife, Christine. Her family was of the farming variety from Greene County. Brent and Christine had much different upbringings and, as it turns out, the way Brent learned how to farm and the way his wife’s family was doing things on their farm was just as different.

“Her dad was no-tilling and I didn’t know any other way to plant corn besides working and working and working the land until it was beautiful,” Pence said.  “I would go up to her dad on his farm and I would say, ‘What are you doing? This is terrible. It looks like jungle planting.’ But he had been farming that way since the late 70s to early 80s and people made fun of him then. He had a lot of problems because the chemistry wasn’t there back then and the equipment certainly wasn’t the same as it is today.”

After watching his future father-in-law through a couple of seasons, Pence realized that he could farm so much more without having extra manpower or equipment and be so much more efficient on the farm. There are still some farms in Greene County that Pence now manages that haven’t been tilled since 1979.

“That really has helped to heal the ground and makes it better and we are all no-till today,” Pence said. “I’ve seen it firsthand when we’ve taken spots in fields that were pretty sad where water wants to stand from plowing year in and year out and what we’ve done, but not doing any of that over the past several years has helped those fields.”

No matter how deep of an agriculture background a beginning farmer may or may not have, some experiences come at a cost of learning and every farmer has that “punch in the gut” moment. For Pence, that moment came in 1999.

“I’ll never forget that year,” Pence said. “We still weren’t farming that many acres, maybe 700 to 800 acres. I had crop insurance that year, but I didn’t have it set up properly. Back then it wasn’t called an enterprise unit, it just kind of lumped all of the counties together. One of my fields made 60-bushel corn and 15-bushel beans and other fields that I farm in the area saw 140-bushel corn and 40-bushel beans. My crop insurance wouldn’t kick in because my averages we too high. That was about a $100,000 loss and when you’re that young, you want to talk about a setback. I learned very quickly how to get my crop insurance set up just right if we were going to farm across four counties. Of all of the struggles I have seen, I will never forget 1999. It was terrible.”

Since then, agriculture has seen some of the best times ever and more recently, a steady decline in commodity prices and farm income, but Pence took his experiences of the late 90s and put them to work.

“When we had $8 corn we paid equipment off and we paid the house off,” Pence said. “I was also able to buy a couple of farms during that era but locking in fixed interest rates for 25 years is a big deal, especially after the recent rise in those rates.

“I obviously wasn’t around farming when things were at their worst, but I have plenty of friends and neighbors that tell me how things got back in the 80s and if those stories don’t scare you straight, nothing will.”

As much of a name as Brent Pence is making for himself on the row crop side, there is a second generation farmer at Lynn Alan Farm that is becoming well known in livestock show barns all over the country. Brent’s daughter, Paige, has about every banner a 13-year-old can have for every species of animal and she’s just getting started.

“I go back to the humbling years of me showing livestock and my wife showing livestock and I, honest to God, don’t know where Paige gets it from,” Pence said. “I was petrified in the show ring and my steers had no hair, but she’s got a talent. Her situation is no different than a kid that plays sports. If they have a certain skill you need to, as parents, to help them reach their full potential.”

“We have surrounded our daughter with wonderful people in this industry,” Pence said. “The families that we show goats, sheep, hogs and steers with are helping Christine and I raise our kid and all of those wonderful people involved in what we do are helping us make her into the young lady that she is becoming.”

And in those rare times when she’s not working livestock, she’s helping out dad on the farm.

“Last year I started letting her drive the tractor some and she ended up doing some vertical tillage and this year she thinks she’s going to start driving the baler,” Pence said. “I truly believe that she will stay around the farm or be a part of agriculture in some way, but if Paige wants nothing to do with this farm someday or marries someone that doesn’t want to pursue this type of lifestyle I am okay with that too.”

With 25 years of planting, growing and harvest seasons acres under his belt and over 3,000 acres to farm, most would say that Pence is well on his way. But for every one person that gave him a shot, there were a dozen that counted him out before the first round.

“When somebody tells me that I can’t do something, then I am going to prove them dead wrong,” Pence said. “I just work harder, keep my head down and keep my mouth shut. That’s how my whole family lives our lives. I can’t tell you how many people told me I would never get this done. Thanks to those chances given to a young naïve kid and the great help around me every day since, I have plenty of reasons to smile when I think about what I have been able to accomplish.”