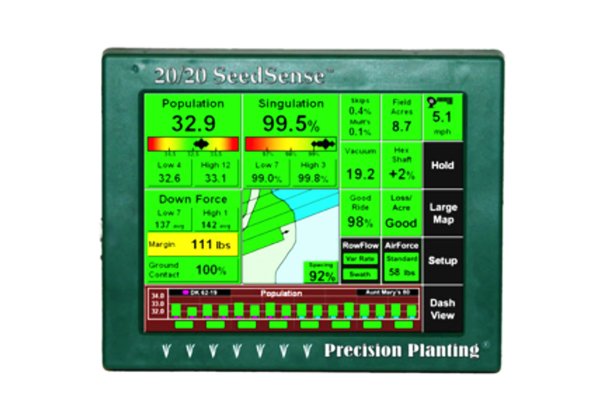 The planting operation is arguably the most important field operation since it establishes maximum yield potential of a seed when placed in the soil. In terms of planting performance, four factors of focus to maximize yield potential and are at the control of the planter operator are 1) population, 2) uniform spacing, 3) uniform emergence, and 4) planting timing and field capacity. Three of these four important factors, population, seed spacing uniformity, and field capacity (ac/ar) can be directly monitored during the planting operation from the in-cab display.

This and other information is provided by new in-cab displays providing the operator real-time feedback. Precision planter technology can help monitor and ensure population and spacing expectations are being met during field operations. This real-time feedback also provides opportunity to the operator to make timely adjustments or most importantly make sure seed is being placed properly to maximize yield potential. Many planter displays today provide additional meter, planter and tractor parameters that can be valuable feedback to the operator along with data (e.g. as-planted data) for post-planting analyses.

One issue with in-cab planter displays is determining what all this information means and how it can be utilized to its potential. Each planter or in-cab display manufacturer uses different terminology. To help with understanding the information being provided by today’s displays, a group of university and industry professionals are working on a publication that lists the terms and associated definitions so users can better understand all this data being displayed and collected. The first list of terms is currently being reviewed by the group and should be published later this year.

Here are a selected few terms and definitions related to the four factors of attention at planting:

Once the publication is reviewed, it will be provided online through the Ohio State precision agriculture website, www.OhioStatePrecisionAg.com.