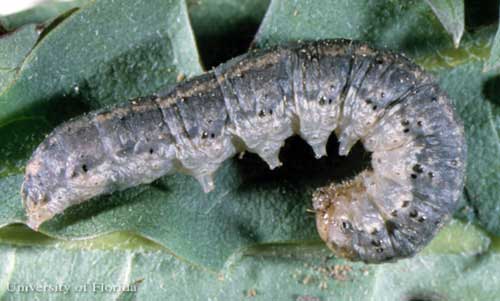 One of the topics of discussion this winter at the corner table of the local coffee shop most certainly was the upcoming growing season and the expected higher than average insect populations due to the mild temperatures this winter. That topic of discussion paired with high armyworm and black cutworm moth captures from neighboring states should keep early season insect pressure at the forefront of growers’ minds this year. Insects that overwinter as adults such as bean leaf beetle, flea beetle, and stink bug will have the potential to have higher than normal populations early this spring. However, just because insect mortality was lower this winter does not mean there will be a problem this spring because populations may have been lower heading into winter. Nevertheless, lets look at some of the insects to keep an eye out for this spring.

Corn flea beetle that overwintered as adults are the vector for Stewart’s wilt that can cause seedling corn plants to tiller and yellow striping in the leaves. Corn flea beetle feeding leaves long linear holes that are parallel with the margins of the leaf. Flea beetle feeding is often confused with slug damage, but can be distinguished by looking for the silvery slime trails left by the slugs on the underside of corn leaves. Some control of corn flea beetle can be achieved using a neonicotinoid seed treatment.

Bean leaf beetle can cause early season damage to soybeans from overwintered adults but rarely causes damage that results in an economic impact due to a soybean’s ability to compensate for early season defoliation. This first-generation beetles leave shot hole feeding patterns on soybean leaves and can feed heavily on the first emerged soybeans in an area.

The visual symptoms of stink bug damage to corn is not apparent until long after the feeding has occurred. Stink bug damage appears as consecutive holes across a leaf that appear to rip or tear as the plant grows. Affected plants may also exhibit excessive tillering and will not produce a harvestable ear. Stink bugs can be scouted for early season concentrating on no-till fields with high amounts of crop residue and corn following cover crops. Corn fields with a history of early season stink bug damage should be scouted for the presence of stink bug.

The final two pests are not of concern due to the mild winter because they do not overwinter in the Corn Belt. Black cutworm and armyworm are of concern, though, due to the high moth catch numbers collected by cooperators of Purdue University. Both insects overwinter in the Gulf States and moths are blown into the Corn Belt on storm fronts where they look for fields to lay eggs. Black cutworm moths look for fields that are green with winter annual weeds to lay eggs. Armyworm moths seek out grass crops to deposit eggs so corn fields planted into a grass cover crop would be of high importance for monitoring.

Growers who are planting traited corn should not be lulled into a false sense of security as not all traits contain proteins that control black cutworm or armyworm. Traited corn growers should consult the handy Bt trait table from the Michigan State University to determine their level of protection. The table can be found here www.msuent.com. Products containing traits that do control these pests may still reach an economic threshold level for treatment under high pest populations so scouting for damage is still advised.