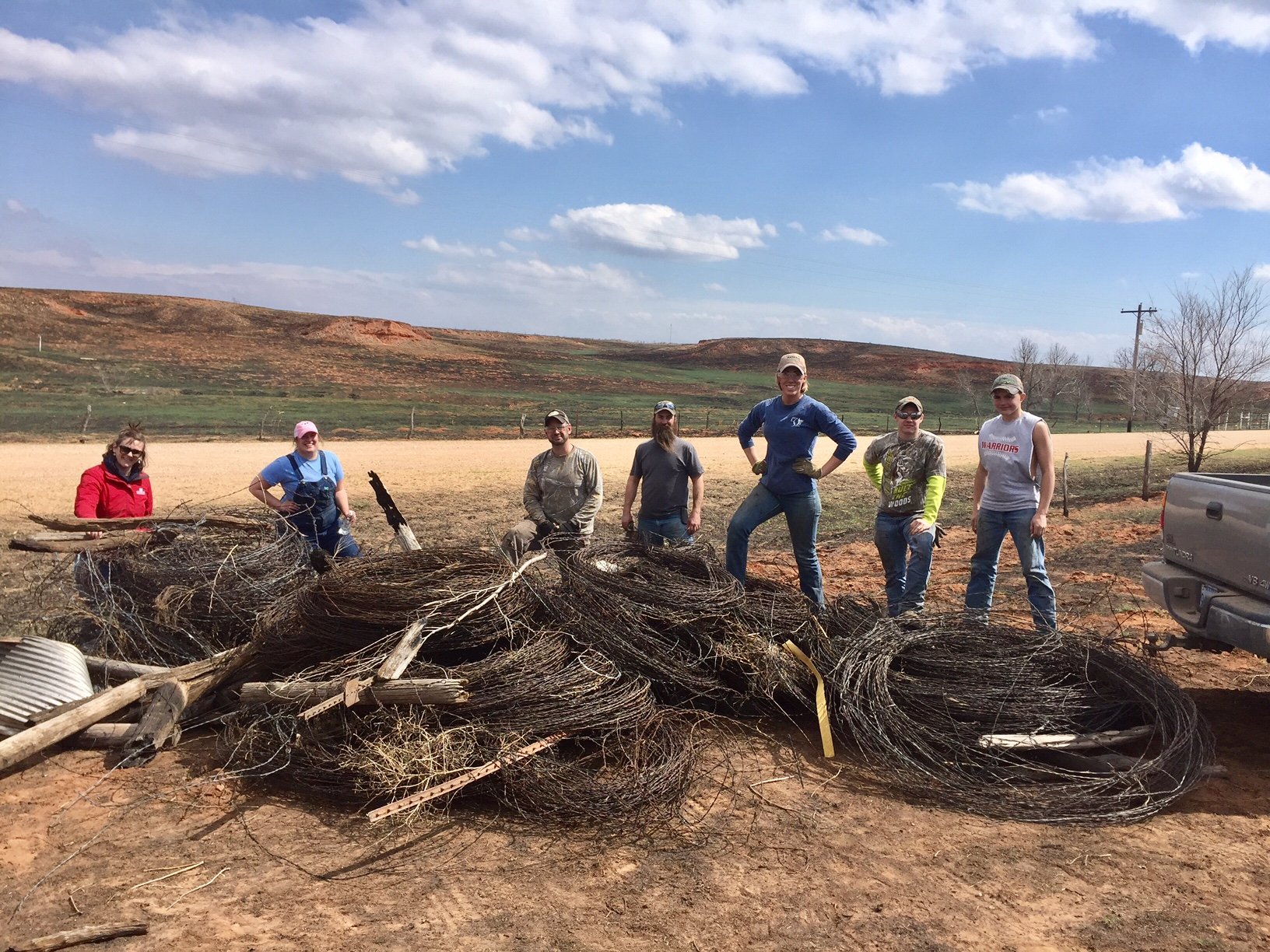 The Ohio group tore out quite a bit of barbed wire fence on ranches in Kansas.

Unified efforts are productive for agriculture

There is tremendous power in teams or organizations to accomplish goals. Ohio is blessed with many wonderful agricultural organizations (checkoff-driven, commodity specific, and general) and there are many truly wonderful people working on behalf of farmers in Ohio within them. I consider myself blessed to have the chance to regularly work with the many fine folks employed by the organizations of Ohio’s agriculture.

Yet, inevitably, as budgets tighten and volunteer hours get harder to come by, it can sometimes seem like a turf war within the tight community of agriculture. Farm organizations need to spend increasing amounts of time explaining why you should be a part of that particular organization for simple self-preservation.

Though there are clearly challenges in this situation, there can also be great success when the organizations of agriculture focus each of their unique strengths on a common goal — an organized effort between organizations. Several recent stories prove just that.

Any property owner in agriculture has noticed the tax increases in recent years. With a history of high commodity prices and other factors considered in the CAUV formula during value reassessments, tax levels skyrocketed for agricultural lands at the same time commodity prices began to fall. It was a tough, but politically sensitive, situation.

It was not that long ago that CAUV was considered politically untouchable because it is a really good deal for agriculture. Ohio had a solid formula for calculating dramatically reduced tax rates for agricultural lands in the CAUV formula developed in the 1970s to ease the tough tax burden on farmers. But, the recent dramatic increases (in excess of 300% in some cases) were cause enough for Ohio agriculture to reopen the issue.

The Ohio Farm Bureau shouldered much of the burden of this political challenge, really digging into the mechanics of the formula to suss out areas that could be tweaked to improve the situation for Ohio’s farms and bring CAUV back into alignment with its original intent that had been skewed through the years. But OFBF was certainly not the only group championing CAUV reform. Ohio Farmers Union attorney Ted Finnarn lent his extensive expertise to the matter as well, testifying on the details of the formula before the Ohio Senate Ways and Means Committee. In addition, I believe without exception, all of Ohio’s commodity groups supported CAUV reform in various ways as well in this issue that truly unified Ohio agriculture.

That is not to say that there was a lack of opposition to the changes. Maybe most notable was the Ohio School Boards Association that expressed concerns about school and local government funding in the wake of an adjusted CAUV formula. The group called for an independent study of the issue and implications prior to moving forward with CAUV reform in the state budget.

Despite the opposition, a unified Ohio agriculture prevailed. The reforms were included in the state budget signed by Gov. John Kasich on June 30 and will be phased-in over two reassessment cycles (six years) in order to assist local communities and schools to transition.

Again, I consider myself so lucky to get the chance to work with the fantastic young people in Ohio agriculture. Ohio’s most valuable agricultural crop is on display in show rings, 4-H judging, leadership camps, FFA, fairs, and other activities around the state this summer. No one can argue that the future of Ohio agriculture looks bright when seeing the hard working, dedicated and thoughtful youth involved in countless summer ag-related activities in Ohio. The many options for Ohio’s youth are due to incredible efforts from Ohio’s agricultural organizations that coordinate them. Youth leadership and character development opportunities abound in all sectors of Ohio agriculture thanks to incredible efforts from Ohio’s agricultural organizations to help prepare the youth of today for being top-notch leaders of tomorrow. As the home of 4-H, who would expect anything less than a unified youth development effort from Ohio agriculture?

At the federal level, there have not been many more agriculturally unifying issues that the unsettling Waters of the U.S. (WOTUS) crafted by the Obama Administration’s Environmental Protection Agency. The WOTUS Rule went into effect in 2015 and expanded the jurisdiction of waters protected under the Clean Water Act. In short, it gave increased power of the federal government in managing the water resources on privately owned, agricultural land.

There was broad pushback from U.S. agriculture concerning WOTUS right from the start. That unified battle culminated recently when the Trump Administration’s EPA and the Army Corps of Engineers announced their plan to repeal the Obama Administration’s Waters of the United States (WOTUS) Rule in June — a huge win for agriculture.

The Midwestern Association of State Departments of Agriculture (MASDA) held their annual conference in Cleveland last month and agricultural leaders from all over the Midwest gathered to talk about tough issues facing their respective states. This event also allowed for some of the states that dealt with a tremendous amount of wildfire devastation this spring to extend their debt of gratitude to those who helped. There were significant efforts from Ohioans who made multiple trips to Ashland, Kan. — one of the hardest hit areas of the wildfires — but volunteers from many states sent help and supplies to farmers in need. This was truly an example of “one agriculture” and a unified effort to benefit those in need.

Those in Ohio agriculture can be proud of these accomplishments that really showcase what can be accomplished when the state’s many agricultural organizations organize in a unified effort with a common goal.