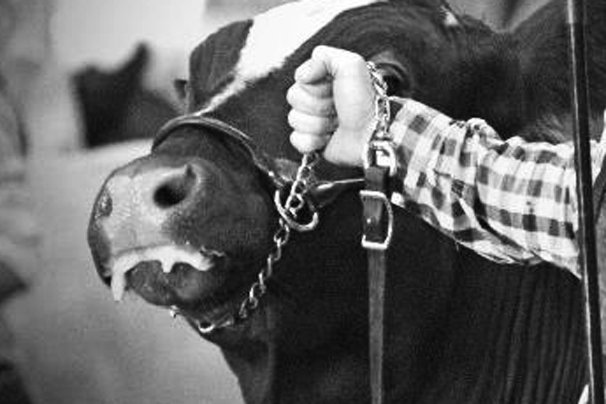 Quietly whistling to himself, the judge strolled by Mike’s steer, giving it a long look. Mike was nervous, but he’d had a good day. He was in the hunt for champion — the last paring down of more than 350 steers. He clutched the halter of his clear favorite, the one he’d had his eye on all year.

Mike’s father started a 4-H club with a focus on showing cattle and he and his brothers had done just that from their earliest 4-H days. They were like most 4-H families and there was always the issue of who would get what animal and Mike had spent his show career picking and choosing with his older brothers. This year, though, was different because Mike’s brothers were older and off to college. Mike got first and last choice.

The steer he led around the show ring at the command of the whistling judge had come from South Dakota. At 17-years-old Mike went on a December road trip from Ohio to South Dakota with a truck and trailer and his 19-year-old brother. That trip would help shape the next several months of Mike’s life very specifically, and the rest of his life in a general sort of way.

It was a long trip for the two boys, but it allowed for the important chance to take a look at some good calves in their natural environment, which Mike really valued in the selection process. Mike had grown up learning how to pick out good calves with his brothers. He found three steers he liked and hauled them back to Ohio. Mike knew they were good.

After months of diligent care and long hours spent working with his calves, the county fair had finally come. Mike took two of his three calves. This was the first time he’d ever specifically left one calf at home to save for the Ohio State Fair. The calves both won their classes at the county fair but the whistling judge did not put them at the top. Mike was disappointed, but he pressed on. After all, he’d saved his best steer back home in the barn for the State Fair. One of his county fair steers sold and Mike brought one home.

The Ohio State Fair was three weeks away. After some thought, he decided to take both the steer he brought home from the county fair and the steer he’d saved for the occasion to the State Fair — two steers, but he only needed one to have a shot at grand champion.

It was a long, hot show. Everyone was tired but Mike remained poised, expertly leading and setting up the Chianina-Angus cross steer he’d saved for this moment from the day he’d picked him out half a nation away many months before. The steer had won his class and, as the show neared its conclusion, his eyes (and the eyes of everyone else in the building) were fixed firmly on the whistling judge.

The moments passed with agonizing delay. Mike’s stomach did a few flips. He didn’t notice the heat, the exhaustion or the building of people watching. He just watched that whistling judge.

Known around the world for his photographic memory, that same legendary livestock judge whistled his way through Mike’s county fair show and now through the entirety of the Ohio State Fair cattle show. That judge never forgot an animal. He remembered them all. He looked over the Ohio State Fair class-winning lineup with the keenest of eyes one last time.

Finally, Mike (and pretty much everyone in the packed stands) let out a gasp as the judge slapped the back of a steer on down the line from Mike to select the champion. Mike was surprised, but not upset in the least.

The ringman came up to Mike, knowing what was going on, and asked if Mike wanted to go get his other calf. Mike said, “Heck no I want to show for reserve champion.”

Mike didn’t get reserve champion with the steer he’d saved for the Ohio State Fair. He got grand champion with the steer he’d taken to the county fair and brought along to the State Fair. That legendary whistling judge was Herman Purdy, and he remembered that steer from the Champaign County Fair that needed about three weeks of good feeding and care to become a State Fair grand champion.

Purdy remembered that exhibitor from the Champaign County Fair too, a young man named Mike Bumgarner. The two spoke after the show.

“I knew you’d be showing the wrong calf when you came back out for the champion drive,” Purdy said.

Mike laughed and with a respectful smile said, “No you just picked the wrong calf.”

Mike went on to sell his grand champion steer to Wendy’s for $26,680, a new Sale of Champions record in 1975. Mike is now the CEO of United Producers, Inc., a cooperative that services 35,000 members, operates 40 facilities and handles approximately 3 million head of livestock annually. Herman Purdy is still known as one of the greatest cattle judges that ever lived. Both left their mark on the Ohio State Fair.

The Ohio State Fair Junior Market Beef Show is on Aug. 5 and the 50th Sale of Champions is Aug. 6. Come and watch as Ohio’s livestock legends are born.