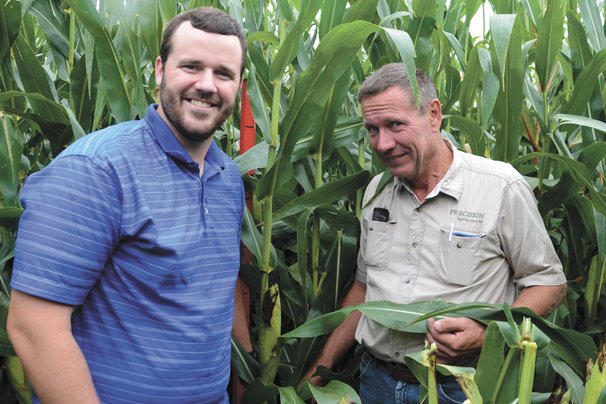 Trey Colley and Tim Berning check in on Terra in late August.

As the growing season has progressed, aerial imagery has been part of the world record setting data-collection efforts for Terra, a single corn plant in a Farm Science Review field. The bird’s eye view of the field through the 2017 growing season has been provided by AirScout.

“The full season package has 14 flights and they start approximately mid-April and fly every two weeks or so. In the heart of the season late June through mid-July, they fly every 10 to 14 days during peak vegetative growth. Then they widen the timeline back out to finish out the season. They will probably do two flights in September and another in October,” said Tim Berning, with Precision Agri Services in Minster, the only AirScout dealer Ohio. “They use fixed-winged airplanes for the imagery. The full year flights take priority. They get an approximate time and they fly when sky conditions are favorable for taking good images. With the planes they can very efficiently take pictures of a lot of acres in one flight.”

Berning is an agronomist and CCA for Precision Agri Services and sees great value in the images for making farm decisions.

“We found the AirScout is a tool for the tool box to help make decisions. Any time we have a test plot we try to get aerial imagery on that. It helps us identify how the crop is responding to management changes. It also helps us identify external factors that would maybe hurt the research we are doing. Prior to using this imagery we didn’t have a good way to measure those factors. That is primarily a lot of what we use the imagery for — for the research projects we have going on,” Berning said. “For farms, there are short term decisions that can be made with regard to insects and diseases moving in. It can help us be more efficient when scouting. You can identify cooler, wetter parts of the field and with AirScout the image is fine enough that you can pick out emergence problems in fields for replant decisions. Aerial imagery gives you a chance to see the big picture view of the field. It is a one-foot resolution so you can take the image and zoom in and start identifying good areas of the field and the problem areas. It gives you a quick snap shot of what’s out there and then helps guide us as far as how we’re going to go out there with boots on the ground to verify what we think we might be seeing with that image.”

“In the ADVI they are taking certain bands of the light being reflected off the crop and assigning numerical values to it and then coming up with a photo. The dark purples and blues mean a very good crop and the reds mean a stressed crop with the greens being in between,” Berning said. “The combination of the three images is the most valuable. Each one gives you different knowledge of the field and the combination paints the full picture of what is going on. Early in the season, the RGB bare 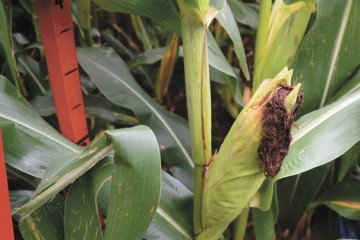 Beyond short-term management decisions, Berning said the imagery could also be very useful in making longer-term decisions for the future of the farm.

“The images can help you decide whether to invest in something like variable rate technology or hire the work done and see how it fits into your management style. One client decided to invest in his own precision application equipment to practice controlled traffic after imagery helped him identify compacted areas of the field,” Berning said. “One client said that AirScout reminded him of the sins he committed in the past year and he changed his management. Aerial images over time should have repeatability and if you find an image that does not fit in the pattern, it is a warning flag that something may not be right out there. This wet year is showing some tile issues that never showed up in previous years. In one case, the pattern had repeated itself from problems in a previous wet year and we found those tile problems that needed to be addressed.”

The Farm Science Review field that is home to Terra has been flown 11 times over the growing season so far, said Trey Colley, a graduate student in precision agriculture at The Ohio State University who is leading the data collection effort.

“We have had 1.6 gigabytes of aerial imagery so far downloaded off of the AirScout website. We have really enjoyed using that as tool and hope to continue doing that in the future,” Colley said. “So far in the total, Terra is up to five gigabytes of data for the whole year. We are going to go really big and see how much data we can collect. We are going to try and hit 10 gigabytes by the end of the year for one corn plant.” 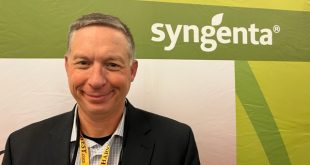 The best laid plans of weeds and men – and Mother Nature

Keeping farmland in the family