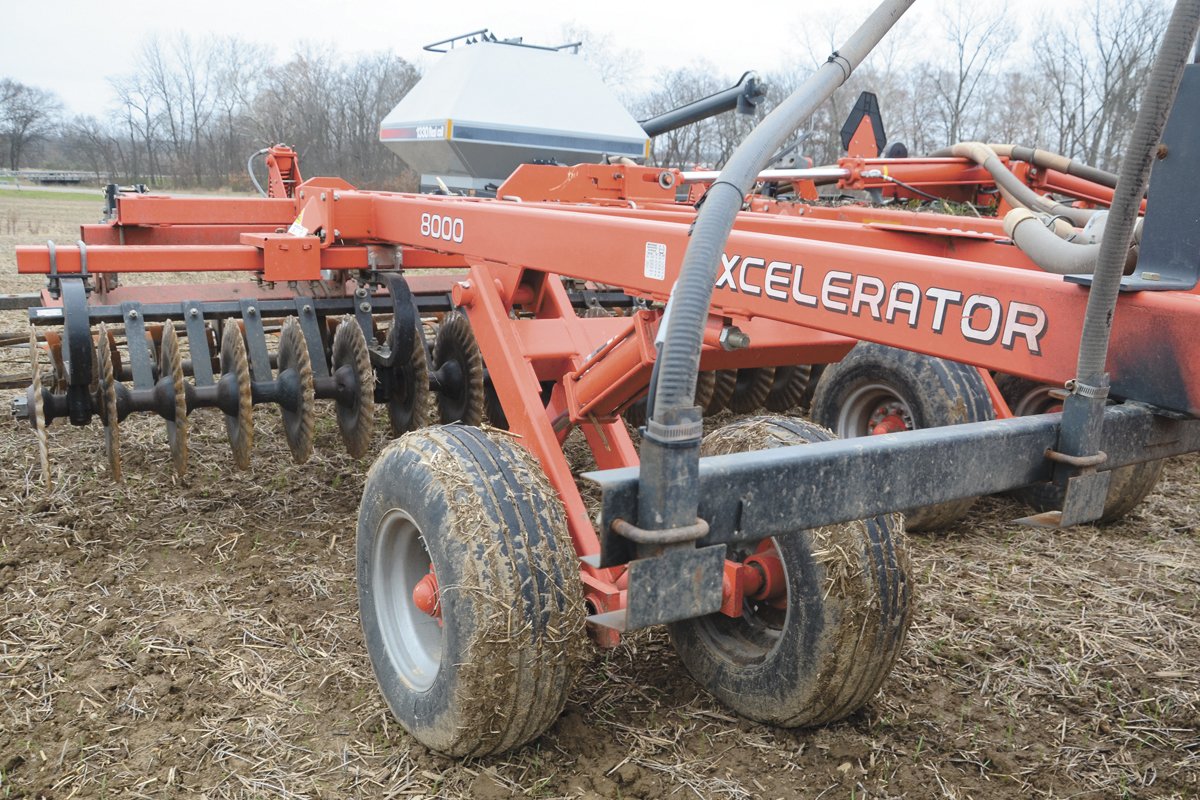 A modified Krause Excelerator with an air cart behind it works well for quickly seeding cover crops in the fall.

Remembering his experiences as a boy back in the 1950s with his father’s corn-wheat-hay crop rotation, Nathan Wilson did some experimenting with cover crops in the 1980s on his Pickaway County farm. Wheat was a part of the crop rotation for the farm and Wilson also tried some cereal rye.

“I tried planting cover crops in the 80s with cereal rye because I remember what that hay had done in the soil. Back then we didn’t have the Roundup beans and if we didn’t get that stuff killed before the beans came up it was a disaster,” Nathan said. “The beans were planted and the rye was head high. It was spitting rain when he sprayed and that night it rained four inches. If we hadn’t got that sprayed it would have been a disaster. The rye died and the beans grew. I felt we were lucky to get a crop that year after a very tough planting situation and I quit cover crops cold turkey.”

Nathan’s sons Ryan and Wyatt Wilson joined the farm in subsequent years and made another push for including cover crops with the long-term no-till on the farm.

“The boys were the instigators for starting cover crops again. They went to a field day at Dave Brandt’s and wanted to try them. It was really dry that year and they couldn’t believe how moist Dave Brandt’s fields were,” Nathan said. “They came back from that

meeting and they were acting funny. They said they were believers and I was all for it. We quit wheat in 2005 so it was just corn and beans and then we started experimenting with cover crops. We tried radishes, annual rye, cereal rye and crimson clover.”

The Wilsons have since settled upon cereal rye as their cover crop of choice.

“We decided to seed cereal rye on the entire farm six years ago. We bought a John Deere 1990 CCS drill and ran it four seasons. The maintenance on it was pretty high running it across that acreage. We thought a vertical tillage tool might be a better choice for scattering the seed,” said Ryan Wilson. “We landed on the Krause Excelerator and thought we could pull an air cart behind it and blow some seed between the rows. We bought a 130-bushel Flexi-Coil three-wheel cart and we pulled it behind the Excelerator. We put the seed between the gangs. It has three towers on it with five runs on each tower. We are blowing the seed out there about every 25 inches. The seed hits a flat piece of metal to spread it. It seems to be working pretty well for seeding cover crops. It is faster than the drill and it is less maintenance.”

They have found that planting soybeans into the green living cereal rye works well in the spring, but to get a corn crop established in the rye they spray it first, even if it requires some extra effort and equipment to do so, Ryan said.

“We planted corn into green cereal rye for three years and that didn’t work well so now we are killing the rye before planting the corn. If it gets shin high and starting to boot we kill it. We bought an ATV sprayer to get out there if we need to in an emergency situation. It has a 200-gallon tank with a 60-foot boom and guidance and we sprayed 1,600 acres with that this spring. We got stuck a couple of times but most of the time on the no-till it sailed right along. We couldn’t get the sprayer out this spring and that is sometimes the kind of thing you have to do to make it work,” Ryan said. “Ahead of the beans we let the rye stay green. We set it back a little bit with Valor that stunts it a little bit.”

Finding the proper seeding rates has also required some trial and error.

“We decided we’d run about 30 pounds per acre before corn and beans,” Ryan said. “We usually follow right behind the combine. If it is early we put on about 20 pounds to start and we’ll go up to 60 pounds per acre late in the year. This year we still seeded into the first couple days of December. This is the first year we didn’t get everything seeded because it was too wet.”

They have also found that corn needs some extra nitrogen when being planted into cereal rye.

“Cereal rye ahead of corn can steal your microbial nitrogen so you need to supplement a little more nitrogen than you might think with your corn planter. You want to get about 30 pounds of nitrogen out with the corn behind the cereal rye,” Ryan said. “It is not available for the seedling because the rye has pulled it up but it will put it back into the soil.”

The combination of the no-till and the cover crops is not always easy to manage, but the Wilsons think the benefits are well worth the effort.