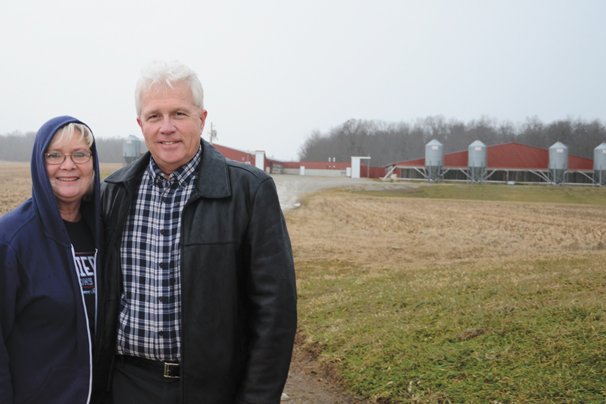 John and Connie Surber got their entire family involved in various agricultural enterprises.

Surber family farms with excellence, then shares it with others

In the social media world of today, those in agriculture are finding that not only is it important to do a great job producing high quality food in an environmentally responsible manner, they also have to tell everyone about it.

Few have done more in terms of both production and promotion of Ohio’s hog industry than John and Connie Surber of Clinton County, the 2018 Ohio Pork Industry Excellence Award recipients. Both grew up in Highland County with farm roots. John went to college expecting to come back and work on the family farm, but instead got an off-farm job in 1975 with Premier Feeds.

“I got hired as a feed salesman at Premier and started selling feed for livestock in the area. I moved up in the company until the 1990s and became president of the company and then we purchased the company in 1999,” John said. “When I started in 1975, Clinton County was the top hog county in the state, but in the 70s and 80s Airborne and then DHL came into Clinton County and farmers started selling their livestock and working for DHL. The cattle and pigs went out of the area. In ‘98 and ‘99 pigs really went out.

“We started branching out into other states with the feed business. We went more regional. In the 90s the pig industry started making the change to contracting and we saw contracting as opportunity. We thought if farmers would build barns we could supply the feed. We were trying to talk people into building contract barns — we were selling but they weren’t buying.”

When asked, “Well if it is such a good idea, then why aren’t you doing it?” John and Connie made the decision to build their first contract hog barn.

“We started a model example farm in 2001,” John said. “We contract raised PIC pigs and we supplied the facility, feed and labor. We started with one barn and then we added barns after that until we had three barns in three counties — Fayette, Clinton and Highland — and those were our models. Once people could see what we were talking about, we got people interested in building barns.”

PIC is based in Tennessee and is the largest swine genetics company in the world, providing roughly half of global swine genetics to pork chain customers through genetic technology, health and services in 30 countries. Teamed up with PIC genetics, the Surbers continued to follow their own example with further expansion of the livestock operation.

“Then we had the opportunity with PIC to build another sow unit that was all our own in Brown County. That was in ‘07,” John said. “Today we continue to grow the multiplication side. We have sows that produce sires for PIC and we have sows that produce gilts for PIC and we sell them at varying weights. We also started an organic dairy pasture-based operation and a manure custom application business.”

In addition to their initial success with the contract hogs, the Surbers also discovered that they really enjoyed working with animals.

“The biggest surprise when we first did this was that we loved it. It was a great fit for our family,” Connie said. “Our daughter-in-law was pregnant at the time and wanted to work at home and she managed a barn. We have four children and at one time everyone in the family was in a barn working to make it successful. One daughter lives in Oregon but other than her, everyone is still involved in the business. For us it is very rewarding to work directly with the animals.”

“The world needs protein and the pork industry is doing an excellent job of staying at the forefront of providing a high quality product in a very competitive market at a very competitive price. Our future is tied to the world,” John said. “The U.S. is not growing and we already have a full plate. Our future is exports. That is our greatest opportunity. We feel like we have evolved as ag has evolved and as the consumer has changed. We are doing things at the opposite end of the spectrum with the pigs and the organic dairy. The point is that is what the consumer wants. We are trying to play by the rules and provide a quality product to the consumer.”

The manure from both the hogs and the organic dairy is applied to crop ground for the production of feed that goes back to the animals.

“We try to use the latest technology in manure application so we can provide the right nutrients in the right place for the crops. We do drag line applications with a no-till applicator that punches holes in the ground,” John said. “The majority of places we apply are in no-till or minimum-till. We apply in a 35-mile radius. The dairy manure is all used on our ground for organic feed production. All the feed goes back into the primarily grass-based organic dairy. The milk goes to Horizon, which is now owned by Dannon.”

While each entity on the production side of the business has its own unique challenges, the greatest challenge facing the farm is public perception.

“Our greatest challenge is that we are on trial every day about what we do and how we do it. We have to tell the American consumer and the world what we are doing here,” John said. “We have nothing to hide here and the consumers want and need the truth about where their food comes from.”

“We realized if we don’t tell our story, someone else will say how you are doing things. We have shower in and shower out facilities and our doors are locked for biosecurity. That raises suspicion. We started doing Operation Main Street programs with civic organizations, county commissioners, rotaries and other groups in Dayton, Cincinnati and Columbus to share what we do,” Connie said. “We’d just talk about what we do every day and then they would have questions for us. We’d reach out to 20 to 40 people at each one of our presentations. We pass out a survey at the end and every single time someone’s mind is changed. We have been doing those for six or seven years right from the beginning.”

More recently, the Surbers have started working with Ohio food bloggers in an effort coordinated by the Ohio Pork Council.

“We have hosted eight or 10 bloggers, in two or three events. They are all from the city and they are clueless about where their pork comes from. When we have these bloggers in we talk about the same things we talk about in Operation Main Street and they can reach tens of thousands of people,” Connie said. “A lot of them want to take a tour through the barn and so far those who have gone through the

barn have been amazed at how clean it is, how clean the animals are and how much care we actually give the animals. They say they can hear the sincerity in our voices when we are talking about the animals and how we care for them. It has been positive for them and very rewarding for us.”

The bloggers also take note of the biosecurity, and have to shower in and out if they tour the hog facility.

“We tell them we have nothing to hide but everything to protect, which is why we have all of the biosecurity that we do,” Connie said. “These are super fun. Our family loves to cook and we really enjoy doing these. We show them how to cook pork the right way. We see the importance of reaching out to these people and we can reach so many people through these bloggers.”

In addition, the Surber family has hosted virtual field trips for elementary students in cooperation with the Ohio Pork Council. The field trips allow teachers and students to participate in a live video-chat with farmers in the hog barn. Using Google Hangouts video chat technology, hog farmers can take students inside their barns and showcase the inner workings of modern production facilities and a variety of aspects of raising pigs from pregnancy through birth to market weight.

“Our daughter-in-law Rebecca has been involved in the virtual fieldtrips through schools. She reaches so many kids through that,” Connie said. “The teacher prepares the students with information from the Ohio Pork Council before the tour. It is pretty amazing how good their questions are.”

With all of their public outreach efforts, the Surbers have seen the value of what they are doing.

“Everyone sees all the negative things on the Internet, but when it comes down to it they really do trust and respect the American farmer,” John said. “They want to hear what we have to say and learn about what we are doing.”

Each step along the way to building their broad family agricultural business has been thought-out and intentional for the Surbers, but not necessarily planned.

“There was no master plan with all of this,” John said. “We started with one contract barn and grew the operation from there. We just do what we do and we have enjoyed everything we have done on the way, not that it has been easy. It has been a lot of work, but it has been worth it and it is wonderful to keep the family involved and continue the more than 200-year-old Surber legacy of farming.”