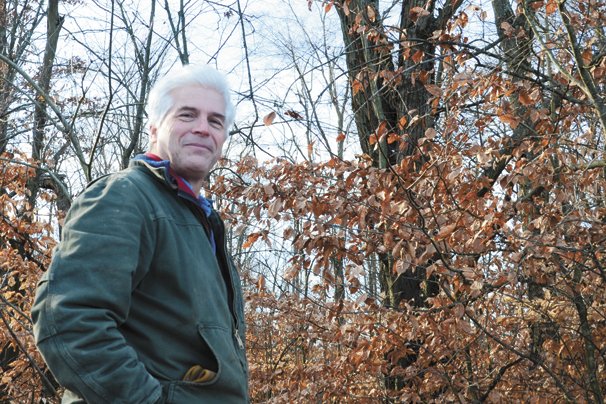 It has been said many times that prior to European settlement the trees were so thick and plentiful in the dense forests that a squirrel could cross what would become the State of Ohio without ever touching the ground. Anyone who has spent time in the woods can only dream of such a forest today with massive trees, plentiful wetlands and a vast array of flora and fauna.

David Hague, with a childhood spent travelling some of the nation’s beautiful national parks, dreamed of what it would be like to stand amid that endless forest. His dreams of days spent among trees, however, were put on hold for many years as he thrived as a businessman in the water softener business in central Ohio where he enjoyed a successful career. Though his busy years of his career mostly kept him away from the natural Ohio he dreamed of, his success put him in a financial position to fulfill his unique vision: at least 500 years of old growth virgin forest in central Ohio.

“We have decided to take marginal agricultural land and return it to as much of a pre-European state as we can. There are lots of bad invasive plants out there for us to kill but there are lots of interesting things to discover too. That’s what we are doing,” Hague said. “There are over 44,000 square miles in Ohio and 42,000 of that was virgin forest. Now there are just a few square miles of old growth forest left in the state. This land has been so abused and I want to return at least a small portion of it it to its native state. Every farm has areas that do not produce well or are too expensive to cultivate and these are the areas that we focus on.”

In this effort, Hague has purchased about 850 acres of woodlots and farmland on the south side of rapidly sprawling Pickerington in Fairfield County. Of that, he plans to have 300 acres in a perpetual forest plan and leave the rest in farmland. The plan is to plant a total of 4,000 native tree species (heavy on oaks, maples, sycamore, and hackberry) that are four to six feet tall, an effort that is about half done. He has also moved roughly 5,000 cubic yards of soil to create around 20 wetlands and vernal pools on the property. He has done numerous prairie plantings and extensive removal of invasive species as well, all according to what the land was in its pre-settlement state.

“I’ve got the land intact now to make it look and feel like it did 250 years ago — to get it back to what we lost,” Hague said. “I bought the land and it is here and that allows other people to contribute to this effort too. I could sell this and develop it and move to Wyoming, but there is too much work to do here. Ohio is so rich in diversity.”

Hague has invested a large amount of his own money but also worked with the Conservation Reserve Enhancement Program and the Electric Power Research Institute (EPRI) Ohio River Basin Water Quality Trading Project. EPRI conducts research and development relating to the generation, delivery and use of electricity for the benefit of the public. The project in the Ohio River Basin got its start after EPRI began investigating the potential of water quality trading as an alternate means for power facilities to meet compliance goals with nutrient discharge limits, particularly for nitrogen. Today the program combines public and private funding sources to help implement various conservation practices in the Ohio River Basin, including the use of cover crops, nutrient management techniques and, in the case of Hague’s efforts, reforestation.

As the trees grow and the wetlands fill up with water, Hague is already noticing changes in the environment. “The sounds are different now. You hear more variety. Even if you don’t know what that bird is or that insect is, you just notice a change in the sound. And once you hear and see some results and the changes of things around you, it all becomes worth it,” he said. “It makes me concerned about every bit of life out here. There is life everywhere that we just don’t know about. There are things out here I don’t know about and I just need to stop and listen and look.”

While Hague has noticed the changes in the fields and forests, when that much land changes ownership, the local human population takes notice as well.

“The farming community, since we are targeting the areas that aren’t particularly productive, they have been supportive and have been happy to assist. Politically, the mayor and trustees from Pickerington favor having open green space,” Hague said. The farmers who were farming the ground continue to rent the land from Hague and longtime hunters continue to hunt on the property because of the significant damage the high deer population can do to the tree plantings and native plant species.

“When I bought the property there were hunters paying to hunt here. The first thing I did was to ask them here and tell that that they did not have to pay to hunt here any more but that I did want their help watching the property and removing invasive species. I insist on no shooting of does that have fawns,” Hague said. “I was prejudiced about hunters at first but every one I’ve worked with has been reliable and helpful. It has been a great relationship. They help remove invasive species and the hunters were

even the first ones to find hard-to-find tiger salamanders on the property.”

While the work on the land is endless, keeping the forestland protected for 500 years may prove even more daunting. Hague has worked closely with local government officials, Fairfield Soil and Water Conservation District and the U.S Fish and Wildlife Service, among others to lay the groundwork for the plan. Tax wise, preservation of the productive farm ground is an essential component.

“The goal is that 500 years from now this is all intact, but it has required a great deal of legal work because it is not a terribly common event for someone to plan out for that long,” Hague said. “What will the political entities be? What will the country, or countries, be in 500 years? We’ve had to think about all of those kinds of things to come up with a legal structure for this to continue on.”

In the meantime, Hague is truly enjoying the process of reverting the land back to its native state and the results, as they appear.

“Just to see a critter out doing its natural thing unobstructed and in its natural environment is very fulfilling. I think now that we have this property, we might as well make the effort to restore what we can,” Hague said. “We may be the top species but that doesn’t give us license to take away others’ existence. Ohio is a great place to live for people but it is also a great place to live for critters too, and many of these need old growth forest to survive so we thought maybe we could do something to help make that happen.”