The Ohio Cattlemen’s Association (OCA) hosted more than 30,000 participants and attendees at the Ohio Expo Center in March for the 2018 Ohio Beef Expo.

The Expo provides an annual opportunity for those in the cattle industry in Ohio, and across the nation, to learn and enhance their operations through a three-day trade show, cattle sales, youth events and educational seminars.

Five breed shows and two breed parades were featured Friday, as well as numerous breed displays representing the Angus, Charolais, Gelbvieh, Hereford, Maine-Anjou, Miniature Hereford, Murray Grey, Red Angus, Simmental and Shorthorn breeds. The Genetic Pathway, located in the Showbloom breed’s barn, had the industry’s most popular sires and donor prospects on display throughout the weekend. Six breed sales brought in large crowds on Saturday, March 17, selling 374 lots with an average price of $2,864 and a gross of $1,197,125. 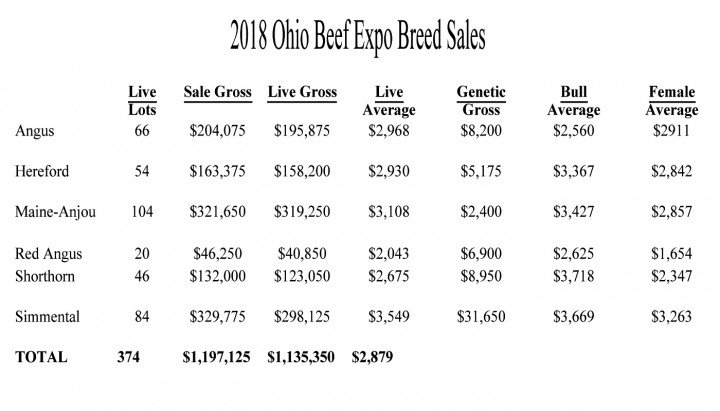 Two recipients were honored with the Friend of the Expo Award for their contribution to the Expo’s annual success. Linde Sutherly, New Carlisle, and Nancy Snook, Caldwell, were both honored. Sutherly is the owner of Linde’s Livestock Photos and a huge supporter of OCA youth programs. She has been the official Expo photographer since 2014. Snook has been actively involved in the Expo since her family participated in the first Ohio Beef Expo in 1988. Since then, Snook has served on the junior show committee, facilitated the judging contest and most recently taught youth beef quality assurance.

The junior portion wrapped up Sunday with the market animal show and heifer show with a combined total of nearly 900 head from across the state. During the junior show, Natalie Wagner, Brown County, was awarded the $1,000 Saltwell Expo scholarship, funded by the Saltwell Western Store and Ohio Beef Expo.

During the event, OCA volunteers signed up and renewed nearly 200 memberships including NCBA members. Any current or new OCA member had the opportunity to win some great prizes. The OCA County Affiliate of Darke County won the County Affiliate Recruitment Contest drawing and received their choice of a grill or set of Tru-Test Scales sponsored by the Ohio Corn Marketing Program.