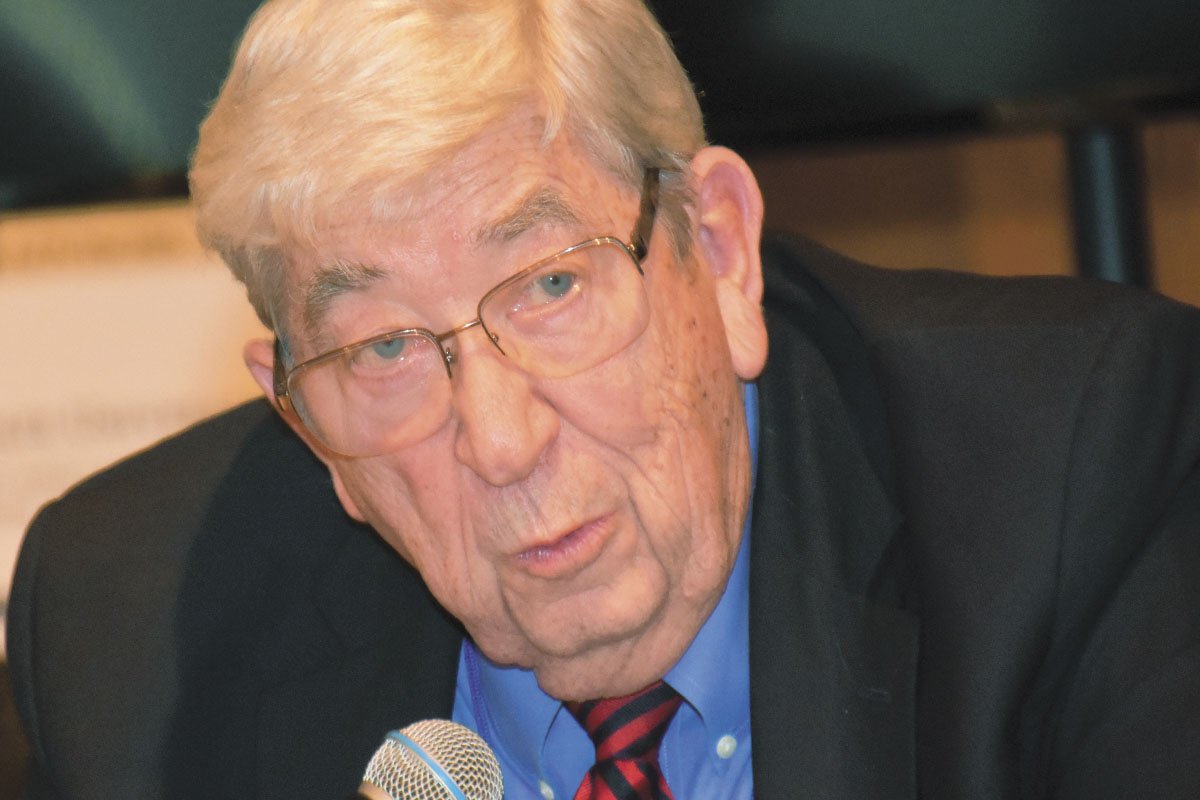 April 23, 2018 Crops Comments Off on A look at soil health in the farm bill

Bill Richards has been concerned with the health of his soil for a long time.

For more than 40 years, Richards and his family have used no-till to reduce costs and limit soil and nutrient runoff on their Pickaway County farm. Richards has also spent countless hours educating his fellow farmers about the importance of managing their land in a productive way while still protecting the environment. He served as the chief of the U.S. Department of Agriculture’s Soil Conservation Service from 1990 to 1993 as well.

“In the late 1950s the agronomists were telling us there was no reason to till other than weed control. Ohio is the cradle of no-till because at Wooster we had Dr. [Glover] Triplett and Dr. [David] Van Doren who started the original no-till research. There was a group that got started and I was sort of the ring-leader, trying these things to make them work on a farm level,” Richards said. “It is a change. It is different management and a different culture. We have a culture carrying over from the plow of the old days where farms should look neat and clean and the soil should be turned over. We fell in love with big tractors and big horsepower. It is hard to get farmers to change, but when the prices get down near the variable costs of production, farmers are going to be looking for a way to produce more efficiently. When we started no-till, our mission was to save fuel and machinery costs — we had no idea about the soil improvement and the erosion reduction we’d see. We learned very quickly that with no-till we could spread over many more acres, but we haven’t progressed like we should. Other countries like Brazil, Argentina, Australia that do not have the price structure like we have here have adopted no-till at a much greater rate than we have here in the U.S.”

For Richards and many others reducing and eliminating tillage has changed the way they farm and view the soil.

“No-till has been a revolution in the way we farm and those using it long term are really benefitting. Then when you add cover crops you really can see the benefits. One of the problems is that we are not doing a good job of measuring those benefits. We have to be able to prove that we are really benefitting and lowering the risk of farming,” Richards said. “No-till is not the only conservation practice, but it is the easiest and the best and the fastest way to raise productivity and make row-crop production much more efficient.  We have been taught that it is all about yield, but it is how much money you have left over at the end of the year that really counts. Some years for us, no-till has lost us money, but over time it has made up money. No-till farmers benefit long term and our tenants also really benefit from that soil improvement from no-till.”

Today, no-till is seen as an important component of conservation and (maybe more importantly) improving soil health that is more often being considered in the ongoing 2018 Farm Bill discussions.

“Back in the ’85 Farm Bill they tied conservation to agricultural payments for the farms. That got a great jump in no-till because no-till was the fastest easiest and most profitable way to meet those standards. That sort of slipped away,” Richards said. “That is something that will probably be looked at very carefully in this upcoming farm bill. There is going to be a big push to tie conservation to crop insurance and that will bring no-till to the front again.

“What responsibility are we willing to accept in return for low-cost crop insurance? I think that is going to be one of the issues in the farm bill that will cause some discomfort in the countryside. I think we have the duty and moral responsibility to use the best conservation technology available to control erosion, improve soil and water quality and increase productivity in the production of food fiber and energy for the long term benefits of people all over the world.”

Richards and others have speculated that soil health requirements for participation in the crop insurance program could be a future farm bill possibility. In the initial version of the 2018 Farm Bill released by the House Ag Committee last week the crop insurance program was virtually unchanged from the previous farm bill, though as more is learned about the complexities of measuring and improving soil health, there is greater likelihood that soil health will work its way into the farm bill.

But what exactly is soil health? The U.S. Department of Agriculture’s Natural Resources Conservation Service defines it as: the continued capacity of soil to function as a vital living ecosystem that sustains plants, animals, and humans. Every farmer knows that some soils are healthier than others but there is still plenty to learn about why and how.

“The first one is minimizing your soil disturbance. When you till the soil, you are burning up your organic matter and we have lost 50% of our organic matter in most of our soils. The second principle is to maximize the amount of live roots. You want to feed the microbes and we know that where we have live roots we will get 1,000 or 2,000 times more microbes,” Hoorman said. “The third principle is rotate your crops and maximize surface residue. You rotate crops to minimize problems with insects and diseases and you want to keep surface residue to protect the soil from erosion. You also want to increase your biodiversity above ground and below ground. The more species you have out there, the more soil life you will have and the healthier the soil system will be. Those are the key principles we are promoting at the Soil Health Division of the Natural Resource Conservation Service.”

“Many times we have to crawl before we walk or run. A lot of these farms started with no-till and later added cover crops. The best place to start with cover crops is after wheat because you have several months for things to grow. Other great places to start are after a hay crop or maybe after some CRP ground. As guys go along they learn more about equipment, seeding rates and management,” Hoorman said. “It is also important to get cover crops out early by using shorter season corn and soybeans so you can get your cover crops planted, growing in the fall and get more roots.”

More farmers are finding that healthier soils will ultimately produce better yields with fewer inputs, though there are often short-term yield sacrifices for long-term gains for improved soil health and farm profitability. This is one factor that makes the soil health advantages hard to quantify and more challenging to incorporate into federal farm programs.

Jim Moseley, former U.S. Department of Agriculture deputy secretary, was on a panel with Richards and others at the Conservation Tillage and Technology Conference in March and said he was hoping soil health would be a bigger part of the farm bill discussion this time around.

“I have been kind of disappointed in the discussion of the farm bill in the last year and a half. It has been about maintaining the status quo,” Moseley said. “We have had an unprecedented amount of new information and enthusiasm beginning to come forth in this area of soil health. If you have this beginning to sweep across the landscape with farmers I guess I expected there would be something innovative that would come out of this legislation to move us forward a little bit and that just hasn’t happened.”

One bit of soil health progress in terms of federal policy Moseley highlighted, however, could develop with the March 1 introduction of the Agriculture Data Act of 2018. The legislation would aggregate and anonymize the vast amount of farmer data that the U.S. Department of Agriculture already manages, making it accessible to land-grant university researchers while maintaining producer privacy. There will likely be a push to include a version of the Agricultural Data Act of 2018 in the next farm bill with one goal being to potentially develop future policy based on gaining a better understanding of the benefits of soil health.

“The world of big data is sweeping across agriculture so we can make better decisions. That is in the private sector, but in the public sector it is difficult to access the wealth of data in the RMA, FSA and NASS. We have worked on this project for a year and a half there has been legislation introduced to collate and access the data so we can do a better job of giving answers to some tough questions,” Moseley said. “What is the linkage between the farmers doing good conservation practices related to their net profitability? Individuals are trying to make that correlation but their data sets are hard to come by. USDA holds real data. You can take the real data and synthesize it into a real solution. Once you get that then you can begin to develop policy around it.”

And, beyond policy development, the lessons potentially learned through the research made possible through the Agricultural Data Act of 2018 could add credence and incentive at the farm level to focus on improving soil health outside of federal policy. Proof of profitability is a powerful incentive.

“The No. 1 question about conservation from farmers is, ‘How is it going to help me with profitability?’ Big picture, there are three things that help with profitability and production: genetics, technology and the third leg to that soil for us to feed the growing population is soil health,” Moseley said. “Without soil health we have an unstable stool. If we are absent soil health we don’t get there.” 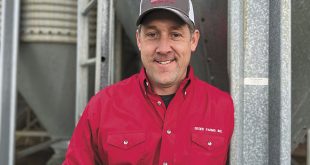 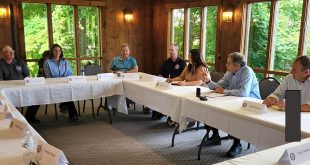