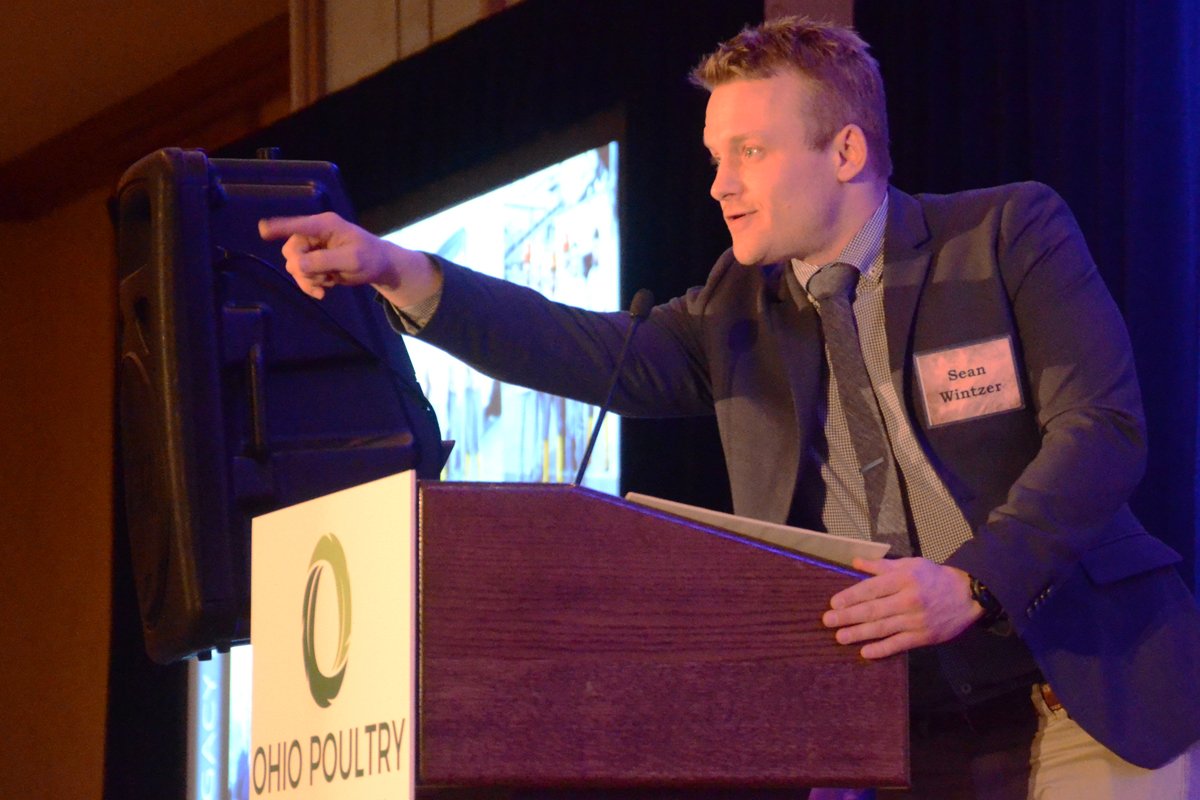 Sean Wintzer made some comments after his family accepted the Legacy Award.

As always the Ohio Poultry Association Annual Celebration Banquet was an event not to be missed. The 33rd annual banquet featured great food and the chance to recognize award winners.

The Ohio Poultry Association’s Golden Feather Award is given to an individual who has distinguished themselves as a champion of poultry, livestock or other agriculture issues. The 2018 Golden Feather

Award went to Kevin Elder.  As a technician for the Fairfield Soil and Water Conservation District in the late 1970s and early 1980s, Elder helped introduce farmers to no-till practices. He then served as the Ohio Department of Natural Resources Division of Soil and Water Conservation, Engineering Section administrator and as an agricultural pollution abatement specialist and was instrumental in rewriting Ohio’s agricultural pollution abatement law and developing the state’s manure management program. In addition, he worked with local soil and water conservation districts and USDA agencies to design and inspect the construction of natural resource conservation practices.

In 2001, Elder joined the Ohio Department of Agriculture and helped to establish what is now the Division of Livestock Environmental Permitting where he recently retired as the chief and executive director. In this capacity, he oversaw environmental compliance of the state’s largest livestock and poultry farms.

the mission and values of the state’s egg, chicken and turkey farmers and this year went to G.A. Wintzer & Son Co. in Wapakoneta. The sixth-generation family operation has several family members still actively involved in the business that employs approximately 120 local residents and their fleet of 200 trucks and trailers travel over 2 million miles per year. G.A. Wintzer & Sons Co. services a large amount of laying companies and feed mills throughout all of Ohio and much of Indiana. The company picks up thousands of restaurants and a variety of grocery stores, food processors, butcher shops and small food operations throughout a five state region. Additionally, they collect millions of pounds of raw material per week and recycle that material back into usable products.

of the state’s egg, chicken and turkey farmers. In his current role as Cooper Farms’ director of live production, Wehrkamp oversees the feed production and care of the company’s turkeys, chickens and hogs. He has been a leader on a local, statewide and national level serving on numerous boards for industry and community organizations, including the Ohio Poultry Association, Midwest Poultry Consortium, Animal Agriculture Alliance, National Turkey Federation, Paulding County Farm Bureau, and Paulding County Carnegie Library, among others. In addition, he contributed to the National Poultry Improvement Plan as an Ohio Delegate and member of the General Conference Committee, and was also a member of the Ohio Smart Agriculture Steering Committee.

“We are a little unique because in other states this is usually housed in the Department of Agriculture, but we work closely with the ODA and the USDA to help plan Ohio’s disease response efforts,” Gregorich said.

The NPIP was established in the early 1930s to eliminate Salmonella Pullorum Disease, which was a major problem in poultry production resulting in up to 80% mortality in chicks. The bacterium Salmonella pullorum causes disease in young chicks and poults producing white diarrhea, dehydration and high mortality. Recovered birds become lifelong carriers and produce Salmonella pullorum infected eggs, which causes the disease in chicks.

Through intensive blood testing and elimination of infected birds, the disease has been eradicated from commercial poultry flocks since the early 1970s. Pockets of infection, however, may remain in backyard flocks and there is potential for the disease to spread from these local isolated flocks into commercial poultry at large. The Ohio Department of Agriculture and Ohio Poultry Association work cooperatively on requiring a negative Pullorum Typhoid test for birds older than 16 weeks of age prior to being entered in a swap, sale or exhibition. Primarily chickens and turkeys are affected though other species such as guinea fowl, parrots, partridges, peafowl, pheasants, quail and sparrows may also become infected.

Since the start of the program in the 1930s, the NPIP has expanded to monitor other diseases — including avian influenza — in poultry flocks nationwide in cooperation with industry, state and federal agencies to improve poultry and poultry products throughout the country. Avian influenza is the focus this time of year in particular.

“It is good that it is quiet right now. We are in the planning response efforts and not actively fighting a disease. My main focus is avian influenza. It is going on a little bit in other states but Ohio, knock on wood, has been very fortunate,” Gregorich said. “Our producers practice awesome biosecurity and they have really enhanced what they are doing on the farm level to keep disease out. We haven’t had any avian influenza breaks. We’re working on education, training, biosecurity and letting people know what the disease is for not just poultry producers but also consumers.”

For Ohio, the risk for avian influenza is highest during waterfowl migration seasons, particularly in late winter and early spring.

“Right now is prime time waterfowl migratory season. The prime seasons are in the fall when the birds are heading south and right now when they head back north. We just had meetings with the Ohio Department of Natural Resources and it is just starting to slow down. Hopefully that will soon calm down and summer is our quiet time,” she said. “February and March are really the times of year things will pop up and we have to watch for the signs.”

Gregorich and the NPIP have worked extensively with Ohio’s many commercial egg and poultry operations to help with the ramped up biosecurity efforts in recent years, but they also spend time working with Ohio’s smaller flocks.

“The commercial producers really know their biosecurity, but there is a different thought process for some of the backyard flocks that we are trying to educate people about,” she said. “We have the NPIP program with 305 participants where we actively go out and test for avian influenza and monitor on an annual basis. We have a new website now for NPIP where you can learn about biosecurity and how to get tested. We answer questions and emails. We do a number of different workshops. Even if you only have five birds, you need to worry about how to keep them healthy and not get problems in your flock.”

One of the earliest signs of avian influenza is increased death with up to 100% mortality in many cases. Birds could also show signs of sickness through respiratory symptoms, depression, loss of appetite, drops in egg production, and/or diarrhea.

Consistent biosecurity practices are the best way to prevent diseases from entering a flock. The following steps suggested by OPA and NPIP can help keep birds healthy:

1. Keep your distance: Isolate your birds from visitors and other birds by setting up a Line of Separation and Perimeter Buffer Area.

2. Keep it clean: Prevent germs from spreading by cleaning and disinfecting shoes, tools and equipment. Handle and store feed and water in a way to limit exposure of rodents, insects and wild birds.

4. Don’t borrow disease from your neighbor: Avoid sharing tools and equipment with neighbors.

5. Know the warning signs of infectious bird diseases: Watch for early signs to prevent the spread of disease.