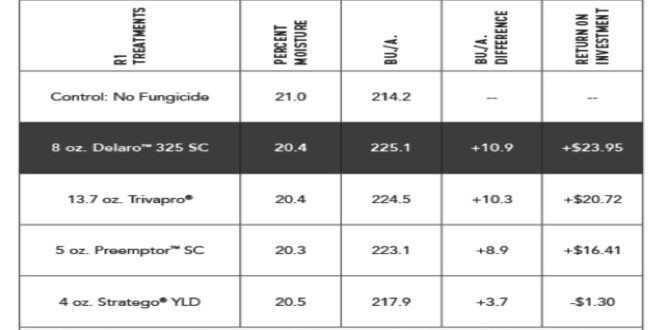 While it may seem far off, soon it will be time to make crop evaluations to determine whether or not to apply a fungicide application to your tasseling corn crop. As of today, several major yield determining growth stages have already passed. Emergence and potential ear size have been determined and pollination (actual kernel number) will take place very soon. The primary function of the corn plant post-pollination is to minimize kernel abortion and maximize kernel depth and weight. Many things can impact these three outcomes but nutrient availability, moisture, and sunlight capture are the most significant.

Many of the fungicide products available today consist of a class of fungicides known as strobilurins. These “strobi” class of fungicides provides multiple benefits. For many farmers, fungicides are considered mainly for their role in mitigating disease. While strobis do provide systemic activity on disease, they also help reduce respiration. Reducing respiration leads to several beneficial outcomes including improved stress tolerance and increased efficiency of the plant’s physiological processes. This results in improved water-use efficiency and increased activity of nitrate reductase, the enzyme that makes a form of nitrogen that can be used by the corn plant. Both of these will have a significant impact on kernel retention, kernel depth and ultimately, yield.

Corn hybrids vary in terms of plant intactness and staygreen as they mature or move towards senescence. Generally speaking, the greener a hybrid remains as it nears maturity, the better the standability, test weight and yield. Preventing the loss of leaf area to disease increases our overall solar panel to harvest more sunlight. Some hybrids also have a tendency to die prematurely, which is often a result of fungi invading the plant from the root system and traveling up the plant. Wetter, saturated soils tend to have increased populations of these fungal pathogens. Fungicides applied at tassel can reduce the severity of early plant death while also allowing the plant to mature more naturally. The longer a corn plant can continue to harvest sunlight, the more energy it can generate to drive yield.

Consider the following when evaluating your need for an at-tassel fungicide application:

If you have concluded that a fungicide is warranted, the last item to address is which product to use? Beck’s Practical Farm Research (PFR) team has tested many fungicide products over the years, but the fungicides that have resulted in the highest ROI have been those that provide the greatest length of activity. Each of these fungicides (shown below) contains multiple fungicide classifications, including a strobilurin.