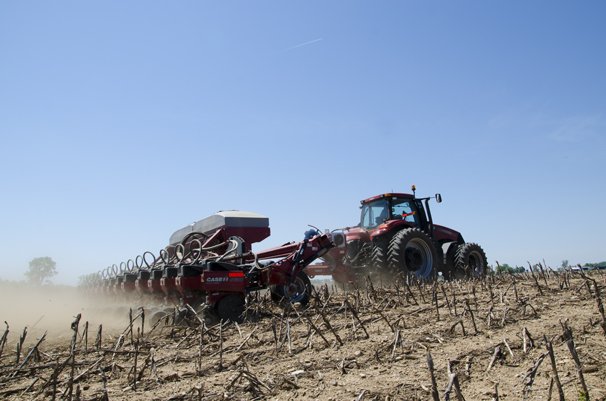 What a difference a year makes! This year producers were unfortunately treated to cool, wet weather for much of April, following an extended winter. Corn and soybean planting progress for Ohio was virtually nil at the end of April. While producers were not pleased with weather conditions they certainly had time to get planters and tillage equipment even better prepared for the push that finally came in early May. The two-week delayed start, in a weird twist, seems to have improved producers’ attitudes compared to last year. Gone were the major frustrations of last spring that brought the unwelcome task of replanting corn and soybeans to reach desired plant population levels for optimum yields. Gone were the added stress levels brought about by replanting two or even three times as nagging rains continued to come out of nowhere. Instead, this year there was unexpected overall efficient planting progress made during the first two weeks of May. Many were estatic at the excellent planting progress for their farms.

At this writing on May 18, producers had not yet seen any hints of a U.S. weather market with the typical huge price swings, both up and down. However, there have already been huge price swings as the U.S./China trade concerns and talks have been ongoing for two months. A common thread seen in numerous analysts’ comments are that price activity during a trade war has violent price swings, similar to those seen with weather markets. Weather can fluctuate producers’ outlooks between glee and gloom multiple times in a span of just days. On again, off again trade talk progress can be a dizzying process to understand.

May 18 brought about a huge change in China’s trade policy with the U.S. They withdrew their anti-dumping claims against U.S. sorghum. The U.S. had been expected to export 6 to 7 million tons of sorghum to China prior to their imposing anti-dumping duties. The U.S. had already shipped 4.3 million tons before the duties were announced. With U.S. sorghum again flowing to China, it prompts the scenario of U.S. feedgrains shrinking, resulting in larger amounts of corn being fed to livestock.

The May 10 USDA Supply and Demand Report yielded neutral implications for corn and bullish implications for soybeans. New crop 2018 soybeans were estimated at 415 million bushels, 120 million bushels below trade expectations. That surprise was the bullish slant for soybeans. Further examination reveals USDA estimated 2018-2019 US soybean exports of 2.29 billion bushels, a jump of 225 million bushels above 2017-2018 USDA export estimates, an increase of 10%. Such an increase would seem extremely suspect given the continuing uncertainty as the U.S./China trade issues have not been yet resolved.

While producers attitudes are the best seen in months with the excellent corn and soybean planting seen at mid-May, those sentiments are not rampant throughout the entire agricultural sector. Bankers in general have been turning down agricultural loans this past winter and spring. The farm slump of declining revenues has entered its fifth year. Livestock producers have seen a sharp decline in cattle prices over $60 since late 2014 while the hog price declines are over 40% since the summer of 2014.

As time marches on this summer, remember that unexpected uncertainty brings confusion. Bull markets do not have their thrust in prolonged periods of uncertainty. Continuing trade talks or trade wars are a no win situation for producers and are not bullish. While stability can be boring, it is the desired event.

Don’t give up on corn long term. Brazil’s corn production could easily be reduced further. Dry weather concerns in China’s northeast major growing area could reduce their production as well. World corn stocks to usage could be the tightest in 45 years. World corn ending stocks in 2016-17 were 227 million tons. USDA’s current projections for 2018-19 are 159 million tons while some suggest they could drop to 140 million tons.

Mid-May weather issues in the US, Canada, Russia, and Australia are once again providing higher prices for wheat. The Black Sea region is the largest wheat exporter in the world. Current weather forecasts suggest their dryness is no longer just a few days event. Instead, it could last for weeks.