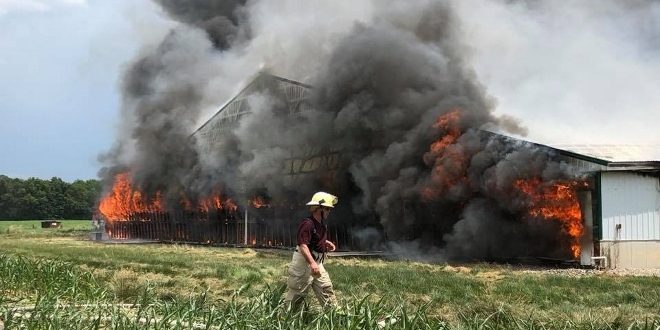 A picture of the 2018 fire. Credit: Fayette County Sheriff's Office

On Tuesday, a major fire broke out at 7111 Old US 35 SE in Fayette County between Washington Court House and Frankfort. According to the Fayette County Sheriff’s Office, 13 fire agencies from Fayette, Pickaway, Ross, Highland and Greene Counties assisted in fighting the blaze.

The fire, reported to the Fayette County Sheriff’s Communication Center at 1:08 p.m. Tuesday afternoon, has totally destroyed the facility and killed approximately 5000 head of swine.

​The Fayette County Sheriff’s Office also reported that the fire occurred at the Straathoff Swine Farm in Wayne Township located in southeast Fayette County. The cause of the fire has not yet been determined. The fire spread quickly throughout the facility causing intense heat and extremely heavy smoke, making it difficult for fire personnel to battle the interior of the fire.

​One member of the fire service sustained an arm injury at the scene and was transported to the Fayette County Memorial Hospital where he was treated and released.

​Agents from the State Fire Marshal’s Office are responding to the scene to conduct an investigation.