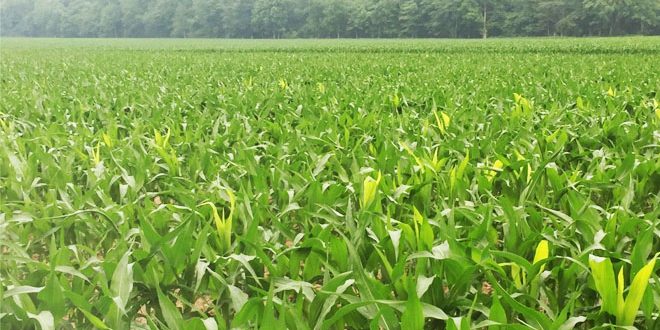 As we begin another growing season in Ohio, growers have already begun

to deal with the challenges of 2018. Although it is early in the growing season, Ohio’s farmers have already dealt with several issues in their corn fields.

Patterns of wet weather and large rainfall events have caused planting delays, slow emergence, and saturated soils in many areas. Due to large rain events this spring, many fields were flooded. While corn can survive flooding/ponding for a period of time, several factors determine the length of time plants can survive. Young corn plants can usually survive two to four days in flooded conditions. Death of corn plants is more likely prior to the V6 stage of development because the growing point is still below the soil surface. Although ponding/flooding has the potential to impact stands, crops can survive under the right conditions.

Usually every year agronomists and/or growers observe purple corn plants during the early stages of growth in some area of the state, and this year was no different. Corn plants can turn purple for several reasons related to environmental factors such as: sunny days and cool nights (temps in the 40s to 50s F), soil pH lower than 5.5, cool temperatures, wet soil, stress that limits the uptake of phosphorus, herbicide injury, and soil compaction. Purpling in corn due to cooler weather most often occurs when plants are in the V2 to V5 growth stages. Because of diverse genetics, hybrids react differently to early stress and some will exhibit purpling while others will not. Anyone who has walked a test plot to observe early plant vigor or has split their planter between two hybrids has probably seen a side-by-side comparison where one hybrid turned purple while the other did not. If the purpling is caused by a temporary stress (sunny days and cool nights, cool temperatures, wet soil, etc.) it will disappear when soils dry out and temperatures increase allowing for normal corn development. Temporary stresses generally do not affect yield. However, if the purpling is symptom caused by a problem that doesn’t go away with a change in the weather (soil compaction, herbicide injury, etc.) yield could be negatively affected.

While scouting corn fields this spring, another phenomenon growers may have noticed is corn plants with new growth that was yellow and leaves that were wrinkled randomly spread throughout their field. This is referred to as “Rapid Growth Syndrome.” In some areas of our sales footprint weather conditions were such that our agronomists and sales staff observed plants affected by Rapid Growth Syndrome. Corn plants are usually affected by this issue is in the V5 to V6 stages of growth. This phenomenon is usually associated with an abrupt change in weather. Twisted whorls can appear when corn plants shift from a period of slow growth (in cool, cloudy weather) to more rapid growth (warm, sunny weather).

Symptoms of Rapid Growth Syndrome include bent-over plants and tightly wrapped whorls that keep younger leaves from emerging. Once younger leaves emerge, they are often yellow but turn green after a few days. Does Rapid Growth Syndrome diminish corn yields? According to Bob Nielsen in his article “Wrapped and Twisted Whorls in Corn,” “Yield effects from periods of twisted growth caused by weather-related causes are minimal, if any.” Growers who observed twisted whorls and notched or wrinkled leaves in their corn fields this spring should keep in mind that plants will recover from these symptoms and yields will not be significantly affected.

Symptoms of nutrient deficiencies have also been observed in Ohio’s corn fields this spring. In certain areas of the state striping of leaves, also known as interveinal chlorosis, has been observed. This discoloration of corn leaves can be due to environmental and field conditions or a result of a nutrient deficiency such as zinc or sulfur. While these symptoms may disappear when weather warms up and plant growth continues, it is a good reminder to scout fields for potential nutrient deficiencies. Scouting and having plant tissue samples analyzed will allow growers to identify deficient nutrients and aid in making sound management decisions.

As the growing season continues, it will be important for Ohio’s farmers to continue to scout corn fields, monitoring plant development and identifying problems. Taking time to walk through fields and scout is a critical part of managing a crop in order to achieve high yields.