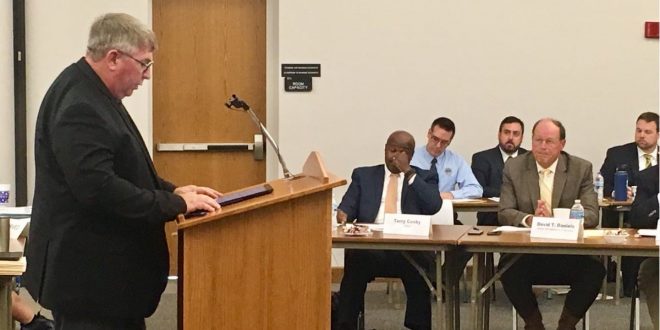 Ohio Farm Bureau, including 7,000 farmers who would be directly impacted by an executive order signed by Gov. John Kasich last week, will finally have their voices heard in the process, thanks in large part to the efforts of Farm Bureau members and the Ohio General Assembly.

The Ohio Soil and Water Conservation Commissioners voted 4-2 to establish a subcommittee to review whether or not eight watersheds should be designated Watersheds in Distress per the request of the executive order.

The commission’s decision gives stakeholders an opportunity to study and weigh in on the designation process itself as well as seek answers to the questions of timing and resource allocation. Farmers have many questions and concerns on how the designation and subsequent rules could impact them. They also want to show that the various mandatory and voluntary practices of farmers in the western Lake Erie watershed are working. Ultimately, the decision allows agriculture to be a part of the process, which was not the case before the executive order was issued.

Ohio Farm Bureau commends the Ohio Soil and Water Conservation Commission for its thoughtful approach while acting on Gov. Kasich’s executive order. By choosing to take a deliberative approach, the commission agreed with the Ohio General Assembly and Ohio’s farm organizations that a decision of this magnitude deserves a transparent and inclusive process.

At the lengthy Soil and Water Conservation Commission meeting July 19, 75 farmers from around the state filled the room while several Farm Bureau members spoke, urging commissioners to take more time to study the impact their decision would have on agriculture and whether or not the financial resources were going to be available to farmers to apply new rules. (Pictured is Duane Stateler, Hancock County)

“They took the time then and the process has been smooth,” Teresa Howick said. “It took time for it to go as smooth as it did at Grand Lake St. Marys, so why wouldn’t you take the time to make it go as smooth in Lake Erie?”

Dennis Howick agreed, noting that farmers don’t disagree that something needs to be done; they just want input on the process.

Ohio Farm Bureau also testified that the commission should be asking many questions about the data used to identify the 8 potential watersheds that would be named distressed.  We will engage in the subcommittee process to ensure that those questions have been answered and the data has been fully vetted.

Ohio Farm Bureau is ready to work with the commission, legislators, environmental organizations, our fellow farm groups, the scientific community and the Kasich administration to find effective solutions to Lake Erie’s challenges.