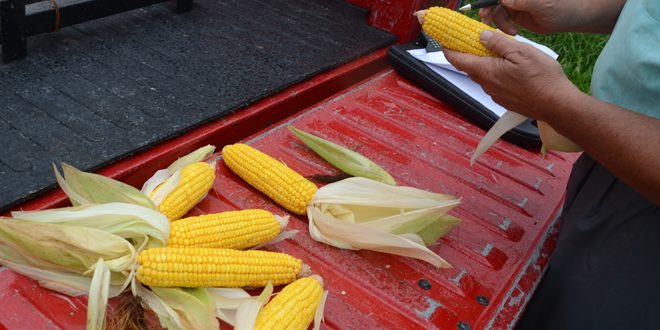 Harvest success in 2018 and beyond

With crops beginning to mature and harvest quickly approaching there are still several actions Ohio’s farmers can take to ensure success in 2018 and beyond. It has been a challenging growing season due to weather extremes, increased disease pressure, spreading populations of herbicide resistant weeds, and more. While many things are out of our control, there are some management decisions growers can make to finish this year successfully and get an early start on a productive 2019 season.

Ohio’s crops have been exposed some extreme and severe weather conditions in 2018. While some areas had plenty of rain, ensuring average or better yields, crops were also exposed to periods of excessively wet conditions or excessively dry conditions. While the weather has been favorable for crop development, some aspects of this year’s weather could negatively affect corn and soybean yields. Although much of Ohio has received above average rainfall, a key factor in raising a crop, receiving large amounts of rain in one event can cause yield-reducing damage to crops. In many areas of the state large rainfall events caused flooding or “ponding” of water in fields. Periods of flooding can cause soil crusting, damage to plant roots, loss of soil nitrogen, promote diseases, or cause plant death. There are parts of fields where yields could be significantly reduced due to damage by flooding for extended periods of time. In areas affected by severe storms, there could also be hail damage, green snap, and root lodging.

While fields may look good from the road, it is always a good idea to scout fields prior to harvest. Nitrogen deficiency in corn has been showing up over the past few weeks, especially where saturated soils occurred. In fields where corn was exposed to heat and drought, especially during pollination, yields could be significantly reduced due to poor kernel abnormal ears. With the variable weather Ohio has seen this year, growers should expect variable yields as well.

Another challenge Ohio’s growers have faced this year is disease in both corn and soybeans. Diseases, especially gray leaf spot and frogeye leaf spot were more prevalent in 2018 than previous years. Northern corn leaf blight and sudden death syndrome were also observed in certain areas of the state. Taking time to identify diseases and using that information to make decisions about tillage, crop rotation, and varietal choices will help growers avoid yield loss or costly applications of fungicides in future growing seasons. Rotating to another crop or burying infected crop residue will hinder the development of disease the following season. In years with moderate to low pressure planting varieties that have strong tolerance to disease can eliminate the need for a fungicide application.

While scouting fields, growers should make sure to assess corn stalks and look for signs of potential standability problems. With the combination of severe weather, heavy disease pressure, and stress on corn plants, stalk strength could be negatively impacted. Performing a “pinch test” on several stalks in multiple locations of a field will allow growers to identify fields where stalks are weak and late season standability is a concern. These fields should be harvested first to avoid harvest loss due to lodging.

Weed control continues to be a challenge for Ohio’s growers. Over the past several years we have seen growing populations of herbicide resistant weeds, such as marestail and giant ragweed. Additionally, agronomists and farmers have observed a growing presence of the pigweed species Palmer amaranth and waterhemp. To minimize the spread of these weeds, growers should be cognizant of their presence and avoid running them through combines. Equipment should be cleaned when moving from field-to-field to ensure weed seed is not carried from one field to the next this fall. One important management practice growers should perform is a fall application of herbicides following harvest. An affordable and effective herbicide application in the fall will help ensure a weed free start the following spring and make weed control easier if burndown is delayed due to spring weather.

While many of the factors making 2018 a challenging year are out of the grower’s control, scouting, note taking, and collecting harvest data will still aid Ohio’s farmer in determining what needs to be done after harvest and next spring. Growers should use the time between now and harvest to observe what issues exist in their fields and use that information to make sound management decisions in the future.