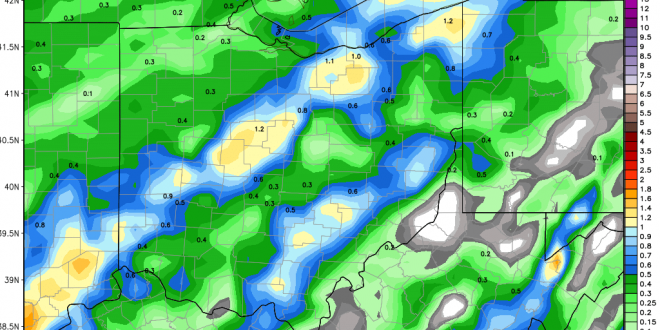 Not much change in the forecast this morning. Ultimately, we probably are not quite as wet for the 10-day period combined, but even that is a very close statement. Today will be very warm, with plenty of sunshine and high humidity values. Temps will average a good 6-10 degrees above normal. 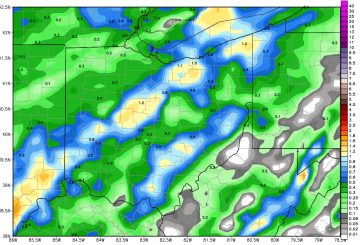 We still have rain moving in for tomorrow, mostly in the afternoon, and then continuing through the overnight into Thursday morning. Rains start early to mid afternoon in west central and NW Ohio, spreading southeast from there. We are bumping rain totals a bit, putting most of the state in range of .25”-1”. We feel more strongly about thunderstorms and the potential for some heavier rain, so we will not be surprised to see some inch and a half totals, but they will be rather limited in scope. Right now, we think the best chances for thunderstorms happen tomorrow late afternoon in north central and NE Ohio. . The map shows rain totals from the system for tomorrow

The rest of the week still features a rather unsettled weather pattern, but even though we see a warm and humid set up, it may not trigger as much of a threat of pop up showers or thunderstorms. In fact, Thursday can be dry, once showers leave the far southern part of Ohio with the front Thursday morning. Friday should be mostly dry too, with only a few hit and miss pop up showers. Saturday can bring some action into the northern part of the, and then we see on an off precipitation potential from there through the balance of the weekend and next Monday.  The entire 5-day period, from Thursday into early next week can bring up to .75” to about 60% of the state.  The biggest holes in coverage will be central to southern Ohio.

We are dry for next Tuesday and Wednesday, then have a weak front for next Thursday. Moisture again has potential, but the front is not all that impressive at this time.

For the extended period, we will keep an unsettled pattern from next Friday night on through the rest of the 11-16 day window. We can’t rule out showers any of those days and we see increasing chances and frequency of moisture as we move through the period. All told, we see potential of an inch or more of rain combined through the entire 11-16 day window, and we may finish it out near the 11th with a strong cold front poised to move through.

Once again, this forecast is not quite as wet as yesterday, but with the heat, humidity and overall unsettled feel, don’t close the door on moisture yet. While this system for tomorrow is by far the biggest one we see in the next two weeks, it will not take much to ramp up action out of these more minor disturbances. Temps remain above normal through September 10. 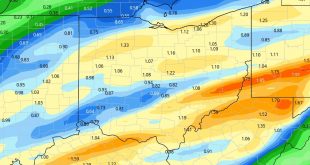