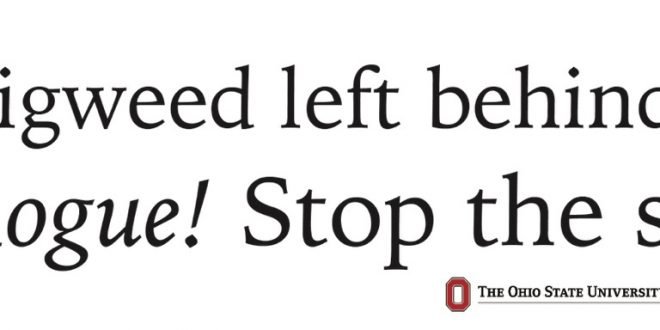 These “No pigweed left behind” car magnets will be available at Farm Science Review.

The majority of our problems with weed management in corn and soybeans in Ohio now arise from five weeds — giant and common ragweed, marestail, waterhemp, and Palmer amaranth.

These five weeds have found a niche in our production systems through a combination of characteristics, including adaptation to various tillage systems, rapid growth, prolific seed production, tendency to rapidly develop herbicide resistance, germination over a large part of the growing season, and tolerance to even effective herbicides unless small. They are not all equally difficult to control. Do a couple things right and marestail becomes much easier to manage, while Palmer amaranth can require effective implementation of every chemical and non-chemical tool available.

Waterhemp and Palmer amaranth, members of the pigweed family, are relative newcomers here, but ultimately have the most potential to increase the complexity and cost of herbicide programs, and reduce profitability. We still know more or less where all of the Palmer populations are in the state, and new infestations seem to come from introductions from outside the state — feed, CREP and pollinator seed, used equipment. Waterhemp has become fairly widespread over the past couple years, and there is now plenty of opportunity for it to move with combines and other equipment, animals, and water. In our conversations with growers, consultants, and agronomists around the state, the general opinion seems to be that waterhemp is poised to take off in both number of fields infested and how severe the infestations are. Here are some things we know about waterhemp and Palmer amaranth.

Some growers and agronomists we have met seem to be of the opinion that it’s a forgone conclusion that within a few years the entire state is going to be infested with waterhemp and Palmer amaranth, regardless of our efforts to prevent it. We do not agree with this. Neither weed is that widespread yet and with some extra effort, we think it’s possible to keep them out of your operation. Or if an infestation starts, we think we can take steps to keep it limited in scope and eventually eradicate it. There is an Achilles heel for these two weeds. They have a soil seed life of usually less than four years, which makes it possible to drive populations way down over a short time period with effective management.

In the end, weed management is really all about the seed — how much was produced, how does it move, where did it go, how long does it last. The reality here is that although due diligence will be needed essentially forever, we think we have one big chance right now to curtail new infestations of both weeds. This means understanding that we cannot let waterhemp and Palmer amaranth go to seed — period. This is the start of our “No pigweed left behind” campaign, which will be an all out effort by the OSU Agronomic Crops team to get this message out. So you will hear from us all winter about this and into the next several years as we try to get everyone up to speed. You can help us get started by picking up one of our “No pigweed left behind” car magnets at Farm Science Review.