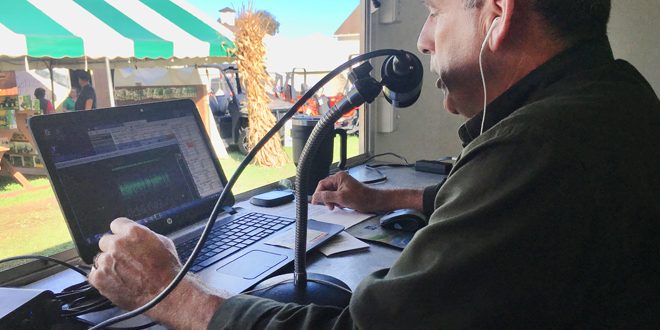 Minyo is a farm broadcaster with Ohio Ag Net. He is often the voice behind the morning and midday radio broadcast. Throughout the fair season, Minyo attends 22 to 25 county fairs in the Ohio Ag Net truck and Kalmbach Feeds Studio, where he records the midday broadcast. His summer work days get started around 3 a.m. and go until the last of the days events are concluded and he can make the drive home. At the Fairfield County Fair Minyo stayed to announce the truck and tractor pulls in the evening, making for a very long day.

“The fairs are always different. But at the same time, we do the same thing with different people,” Minyo said. “They all have unique things about them.”

For the broadcasts from fairs, Minyo interviews independent sponsors, fair kings and queens, and sometimes the showmen of champion market projects. Minyo believes that being at the events help to promote and remind people of county fairs in their areas.

“I would like to always make sure we’re doing a good job at featuring and highlighting what makes that fair unique,” Minyo said. “There’s always going to be an opportunity to tell someone’s story.”

Minyo often meets people that he grew up with or generations that he watched grow up. He has interviewed several people when they were exhibiting in country fairs and now sees them in adulthood mentoring the youth.

“Who knows where you might run into them again?” Minyo said. “The biggest challenge is to not talk to too many people and still get your work done.”

With his busy schedule and long summer hours, Minyo often passes up on the fair food, though he has some do-not-miss stops throughout the summer. When he does get fair food, he said that he likes to sit down with the venders to hear about their stories.

“I do have favorite ice cream places that I go,” he said

The selection of the fairs Minyo and the Ohio Ag Net attend is based on sponsorship. In 2018, AgriGold sponsored 10 county fairs, usually different counties every year, FIC Dealerships sponsored five and others are from independent sponsors. JD Equipment of Lancaster was the independent sponsor for the Fairfield Country Fair. At the end of a long summer of almost daily travel to fairs, field days and often other evening events, Minyo is ready for the comparatively slower schedule during harvest (and maybe a nap).