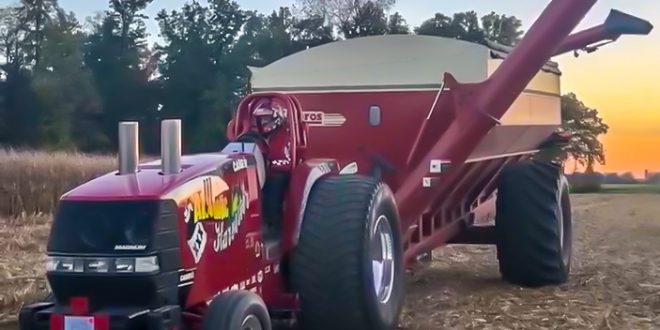 It’s hard to go to a tractor pull and see those souped-up machines barreling down the track without thinking “what could those actually do on the farm?” The Metzger family of Shelby, Ohio recently had fun trying that out with their pulling tractor ‘Alcoholic Harvester.’ You may have seen it yourself as the video posted by Jim Metzger of the super-class tractor pulling a grain cart through a field currently holds well over two million views since it was posted about three weeks ago.

“It’s actually my brother’s tractor and he’s the one driving it,” said Jim Metzger. “We pull the tractor all over the state of Ohio and for the sixth out of seventh year that happens to be the number one tractor again in the state of Ohio in the alcohol super class. We run at Bowling Green, a few NTPA hooks, but mostly OSTPA hooks. We decided one day that it would be nice to hook that thing to the cart so just so maybe if one day the tax man says why do you spend that kind of money on the tractor, maybe we did a little bit of work with it.

“I was on my way home from work and my brother called me and said hey, bring the tractor out to the field. We’re going to hook it to the buggy.”

Watch below the original video.

Though pulling tractors are made for heavy sleds, they aren’t exactly set up for regular hitches.

“We took a couple clevises and made our own hitch for it and hooked her up to the buggy.”

The hitch isn’t the only thing different than the pulling track, as the brothers found out.

“You don’t realize the ground — when you run on a track it’s all packed down. The field is not packed. When he went to take off, I even said something to him that now when you go to slow down you might want to not hit the brakes because it’s going to want to push you. There was about 330 bushel of corn in the buggy. It will push you when you can’t get her stopped so I just told him let it ride it out and that’s what he did.”

Even with the cart getting a bit squirrely after the short run, all turned out just fine. After posting to the internet, quite a few others enjoyed the video as well.

“I never counted them all but I bet I had close to 5,000 friend requests. Everybody wants to be your friend now.”

Jim helps his dad and brother on their 1,800-acre farm when he’s not busy with his full-time job working with locomotives. Down the road, he said there are thoughts of bringing out the pulling semi for another fieldwork adventure.

More exclusive video from the Metzgers here as they prepare for the pull.