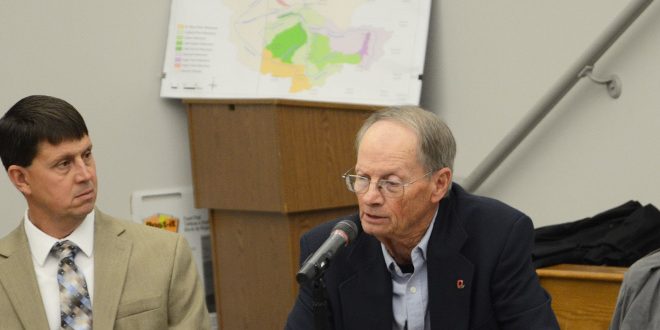 Roughly $1.8 billion to implement Comprehensive Nutrient Manangement Plans (CNMPs) and replicate efforts in the Grand Lake St. Marys Watershed on all farms in the 8 watersheds being considered;

Potentially 2,100 new Natural Resources Conservation Service staff members required to implement the CNMPs throughout the watersheds and replicate efforts in the Grand Lake St. Marys Watershed on all farms in the 8 watersheds being considered;

$1 to $2 million in soil sampling costs for farms in the watersheds every three years:

The Ohio Farm Bureau dug into the numbers of the proposed Watersheds in Distress designation currently being considered by the Ohio Soil and Water Conversation Commission (OSWCC). These numbers have generated ample concern for Ohio agriculture but are worth tackling for those desperate to make some progress in the daunting challenges of the incredible resources of Lake Erie. The ongoing battle between Ohio’s two massive economic, social and environmental behemoths of Lake Erie and agriculture took center stage today as the OSWCC met to review input from the Distressed Watershed Task Force.

“To me the commission has a very simple question before it, which is the designation of the eight watersheds as watersheds in distress,” said Craig Butler, director of the Ohio EPA. “Complex issues about data quality and quantity have been asked and, frankly, answered. By every measure, every standard, the eight watersheds should be designated as distressed. Any time for delay should be over. Frankly tactics that have been employed about misinformation and grandstanding frankly should stop. Ohioans expect this commission and its members not to do what is best for any individual member or group but what is best for all Ohioans. We need to set aside any personal animus, and get down to the business. Let the science speak and let it inform the policy of this Commission and the State. Delay tactics jeopardize the integrity of the Commission in my opinion. We need to protect Ohioans and protect Ohio. I’m a non-voting member but I think it is imperative that this group move forward with this vote so we can move forward with the business of answering these unanswered questions about implementation and rules. Please do not delay. Please do not play politics with this issue.”

“I also have concerns about the rules as we really don’t know specifically what they are,” said Kent Stuckey, Commission member with the Ohio Federation of Soil and Water Conservation Districts. “I do feel that we have a responsibility to everybody in Ohio. We need to look at this. We need to make sure the rules are in place, that they are rules that everybody can live with and that will actually be effective. At this point, we don’t know what that is.”

After all of the comments were heard, Stuckey made a motion to “table the vote until and when the proposed 2018 watershed in distress rules package currently before JCARR is approved by the Soil and Water Conservation Commission by Feb. 15.” After hearing the comments, the OSWCC members voted 4-3 to wait on a vote on the designation of Watersheds in Distress.

To see the comments leading up to the vote and the vote itself, click here.

“I think it is the right decision. We know the complexity of this issue to make sure we step back and involve everybody in this process. We all have the same goals about improving water quality and there are so many unanswered questions. We need to make sure we can answer those questions. Agriculture wants to do more but I think we have got to get some answers to these questions as we move forward for these next steps,” said Elizabeth Harsh with the Ohio Cattlemen’s Association, who served as a Task Force member. “There was a lot of commonality in terms of the goals. This is not a political situation necessarily. It is about making the right decisions that really, in reality, improve water quality. I think we got to that in the Task Force discussions. With some of those issues and parts of the executive order, nobody could really guarantee that we were actually going to be able to have meaningful impact on improving water quality.”

A public meeting for comments and questions about the proposed rules being considered through JCARR will be held 9 a.m. on Nov. 20, at the Ohio Department of Agriculture’s Bromfield Administration Building, 8995 E Main Street, Reynoldsburg.

See what’s next in the process to tackle water quality issues in this video.