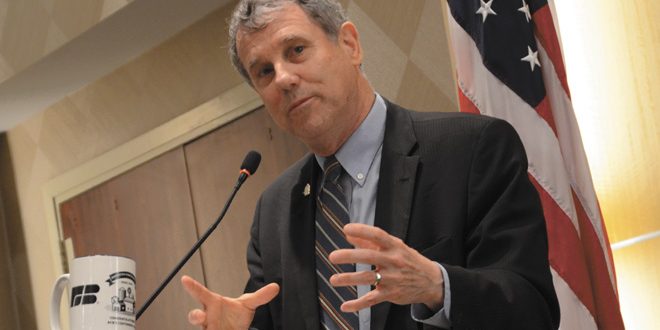 Ohio’s senators weigh in on the changing climate

There is no doubt about it: 2018 was wet. It was the third wettest year on record and farmers should prepare for more soggy situations moving forward. At the recent Conservation Tillage and Technology Conference in Ada, Ohio State University climate specialist Aaron Wilson said temperatures are also on the rise and more rain is not coincidental. The warmer conditions lead to a greater amount of water vapor in the atmosphere and increased rainfall potential. Farmers are acutely aware of the situation; so are politicians.

This week in Washington, D.C. there was also plenty of talk about the changing climate as legislators considered the Green New Deal resolution spearheaded by Rep. Alexandria Ocasio-Cortez (D-N.Y.). The much-discussed Green New Deal brought “cow farts” into the national political debate and strives for net-zero greenhouse gas emissions in the United States and the creation of jobs. Estimates suggest the Green New Deal could cost anywhere from around $50 trillion to over $90 trillion between 2020 and 2029 in addition to a wide array of potential societal costs.

Ohio’s two Senators weighed in with their thoughts on how to address the changing climate with the Ohio Farm Bureau county presidents this week, who were lobbying in Washington, D.C.

“There are absolutely things we can do to reduce emissions. We should and we can do it in a way that is pro-growth, pro-jobs, pro-farmer — it doesn’t have to be either or. That is one thing that gets lost in lot of the coverage I have seen,” said Sen. Rob Portman (R-OH). “People say Republicans are deniers and Democrats want to do something about it. Republicans like me want to do something about it too. And we’ve done things about it. We actually have a reduction in CO2 emissions in this country at a time when other countries are increasing their emissions. We have done it through a lot of different ways through having more alternative fuel vehicles out there — including using ethanol — and through energy conservation and efficiency.”

Portman co-authored the Energy Savings and Industrial Competitiveness Act introduced in 2017 that passed the Senate with 82 votes and seeks to implement energy efficiency measure and incentives to reduce the carbon emissions equivalent of 15 million vehicles over the next 10 years.

“We can do better in terms of energy efficiency and that is a great way to reduce emissions but also to add more jobs. We should be able to use technology and innovation better and we are starting to do that. I support legislation to give our power companies incentives to be able to capture carbon and sequester it and start a carbon market. Finally I will say that people who are really serious about climate change ought to look at nuclear power. There are advanced nuclear power technologies out there. It is emissions free,” Portman said. “There are ways we can make sure we have the base power we need. We have solar and wind. We have it in Ohio and we like it, but sometimes the sun doesn’t shine and the wind doesn’t blow. You need to have that base power also. We have two nuclear plants in Ohio and they are both aging. We need newer, safer, more innovative plants that are much more efficient. There are lots of things that can and should be done and we are doing some of them, but to take up the Green New Deal and put that on the American people and the American farmer would be disastrous. It would increase everyone’s costs of electricity dramatically.”

Sen. Sherrod Brown (D-OH) is not supporting the Green New Deal being pushed by many in his party, but does want to take an aggressive approach to addressing climate change.

Talking about the climate with Ohio Senators inevitably leads to talking about Lake Erie.

“You can’t ever pin one weather issue on climate change but you can certainly see patterns. It is hard to believe that what is happening in Lake Erie with algae blooms isn’t related to climate,” Brown said. “The people that continue to deny climate change should be embarrassed. They are dishonest or they don’t want to face the truth.”

Brown also talked about President Trump’s proposed budget that makes significant cuts to agricultural programs and the Great Lakes Restoration Initiative (GRLI). Brown said the 90% — $270 million — proposed cut would devastate the GLRI that has successfully jumpstarted restoration efforts to protect, maintain, and restore the chemical, biological, and physical integrity of the Great Lakes, including Lake Erie.

“Ohioans rely on Lake Erie for jobs, clean drinking water, and a place to enjoy with their families. Instead of investing in Ohio communities so they can grow and create jobs, President Trump is asking Ohioans to pay for tax cuts for millionaires by gutting Great Lakes programs and eliminating economic development efforts,” Brown said. “Senator Portman and I have always fought to ensure the GLRI is at full strength as communities work to keep Lake Erie clean. I will continue fighting for Ohio priorities throughout this budget process.”