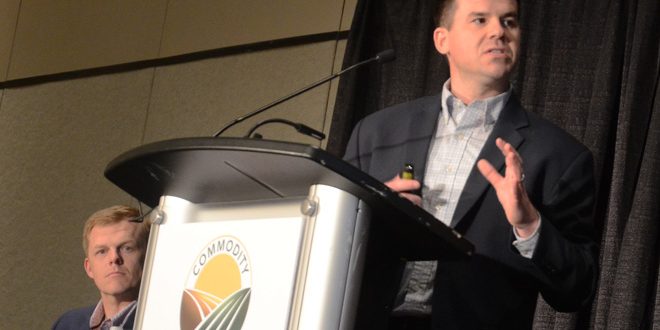 Soybean cyst nematode (SCN) continues to rob soybeans of yield and numbers are climbing in some Ohio fields.

“There are fields throughout the Midwest where not only are SCN numbers creeping up to economic levels but also the reproduction factor, which is the ability to reproduce on the one source of resistance (PI 88788) is also creeping up,” said Anne Dorrance, Ohio State University plant pathologist. “The good news is that adaptation to the PI 88788 type of resistance towards SCN in soybean is going to be slow — but it is happening in a couple of fields in Ohio where the number of cysts are up to 27% of the susceptible check.”

Dorrance said there was quite a bit of discussion at the recent Commodity Classic concerning SCN in the Midwest. This discussion included the recent acquisition of BASF-developed Trunemco seed treatment by an Australian-based company called Nufarm. Trunemco features combination of microorganisms and biochemicals to defend against a broad spectrum of damaging nematode species, including SCN in soybeans. The use weight of 0.3 fluid ounces per hundredweight of seed allows ample flexibility for user safety and use in combination with other seed treatments as well. Trunemco will be available for the 2020 planting season pending regulatory approval.

“Nematodes are an unseen pest that cause a tremendous amount of damage annually. It is estimated that upwards of $10 billion is the result of the yield loss attributed to nematodes and more than $1 billion of that is attributed to SCN alone,” said Brandon Scott with Nufarm. “Trunemco primes plant physiology and actually activates natural nematode barriers that optimize that protection. We also have two modes of action with Trunemco that provide a dual defense inside and out of the plant. At the end of the day it is all about that optimum level of protection. By having that leading level of protection it helps that plant thrive, delivering those higher yields.”

Spring is still a good time to sample fields for SCN to get a better handle on the populations in fields, Dorrance said.

“Once the samples are processed, those with more than 500 eggs per 100 cc are then added to the pipeline to evaluate for which source of resistance is effective towards that population: PI 88788 or Peking,” Dorrance said. “This will help first, the farmer to know what type of seed to buy and second, companies to make decisions on what type of SCN resistant trait to target for Ohio soils.  So help us have the best data set in the U.S. by sampling today.”

For more on sampling procedures for SCN see: https://www.youtube.com/watch?v=FQgg-UPQdcs&feature=youtu.be