The importance of documenting loan receivables from a tax perspective

If you have ever purchased a farm, a house, a tractor, or any other item that required financing, you know that there are many documents that must be signed when financing a purchase. Chances are you have signed documents with all kinds of terms related to principal amounts, interest rates, due dates and penalties. Although reading these documents can be somewhat terrifying, especially when reading the penalty provisions, these documents serve a purpose.

For farming businesses that make loans to other family member or customers, these documents are the legal proof that establishes that they are entitled to money and how they are to be repaid. When a business goes to court to get a judgment against someone who has not paid them, they are expected to produce those documents to prove that they are owed money from a specific person. And the truth is we would not have it any other way. Fairness demands that if a business is demanding someone to pay them, they need to have written proof of it.

Farming businesses, big and small, also need these documents to prove to their accountants and to the IRS the existence of those loans for tax purposes. There are times when businesses may feel that there is no need for these documents because it’s an inconvenience or they know the party that they are lending to. This is a big mistake. Recently, in the case of John M. Sensenig, et ux. v. Commissioner, TC Memo 2017-1, Code Sec(s) 166; 385; 6662; 7491, the tax court found that lack of documentation of loans was a major factor in the denial of bad debt loss deductions by a taxpayer. As a result, not only did the taxpayer lose major deductions for bad debt losses due to the lack of documentation, but the taxpayer incurred significant accuracy-related penalties as well.

Just as a court would demand those documents in order for a farming business to be able to obtain a judgment against someone who owed them money, a tax court and the IRS will demand to see those same documents to prove that they are entitled to claim a bad debt loss deduction. Another wrinkle in the Sensenig case was that the loans made in that case were made between businesses that had common ownership. Due to the common ownership and the lack of formal documentation of the loans (among other things), those loans were not only not allowed to be claimed as bad debt losses but were treated as equity by the tax court, which has further significant accounting and tax consequences (not to mention headaches).

Loans that are made to shareholders, members or other related businesses receive a high level of scrutiny from the IRS and tax courts. Not only does documentation play a major role in determining whether the loan should be treated as a loan or as an equity contribution, but so do things such as creditworthiness, relationship of the lender and debtor, attempts to collect the debt if delinquent, capital structure of the debtor, and other factors related terms of the repayment of the loan.

Documentation of a loan is a critical first step in establishing that a loan should be treated as loan and nothing else such as a gift or equity.

At Holbrook & Manter CPAs, we can help guide you and your business through the steps to effectively document and preserve any loan interests you and your farming business may have.

Brian E. Ravencraft, CPA, CGMA is a Principal with Holbrook & Manter, CPAs. Brian has been with Holbrook & Manter since 1995, primarily focusing on the areas of Tax Consulting and Management Advisory Services within several firm service areas, focusing on agri-business and closely held businesses and their owners. Holbrook & Manter is a professional services firm founded in 1919 and we are unique in that we offer the resources of a large firm without compromising the focused and responsive personal attention that each client deserves. You can reach Brian through www.HolbrookManter.com or at BRavencraft@HolbrookManter.com. 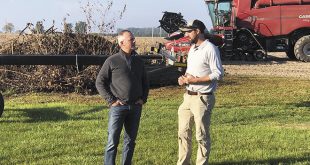