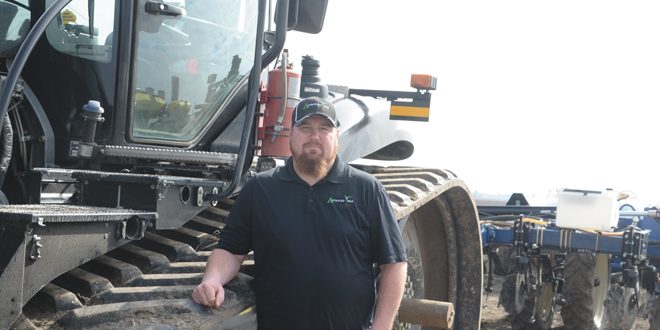 There is not a row crop farmer in Ohio who can avoid getting a bit antsy sitting idle as temperatures warm in April and conditions approach ideal. Yet, the early spring experience of many has shown the perils of getting a jump on planting the often-fickle corn crop. Cory Atley of Greene County, founder of Advanced Yield, has found a spring planting recipe for success, and he’s got impressive yield numbers to back it up. He plants soybeans first.

“We really want to plant when the conditions are fit. Normally we only really get 10 or 14 days of optimal conditions when things are right and we really try to take advantage of that. We have seen through a lot of different planting trials we have done on our own farm that the early-planted beans are the easiest way to pick up more bushels. Beans don’t mind some stress. They are rough and tough and they can handle it,” Atley said. “It is hard to sit on your hands when you have a lot of acres to get across. It is hard to not do anything just because the soil temperature is not quite 56 degrees. We’ve learned, instead of messing up the corn crop, let’s just go after the beans. They like being earlier. The corn doesn’t like being stressed early. By the time we get done with the beans, we save ourselves from ourselves. We have implemented that into our farm for a few years now if we are able to get in during April. We get the beans out first and then the corn. Now, obviously if we can’t get in until the middle of May, things change with that, but we normally see an 8- to 12- bushel increase with the early-planted beans. We started when we just had one bean planter and wherever that guy ran, it didn’t matter the variety, side-by-side on the same farm — those earlier-planted beans were always better. That is what first grabbed out attention.”

The productive soils on the Atley farm are primarily conventionally tilled with a v-ripper in the fall followed by a field cultivator in the spring. Soybean fields get a burndown and post- applications are used in the fields as needed.

“In 2018 for beans we were really wanting to get some out in March. We had a small window where we wanted to attempt it but they were calling for snow so I sat on my hands. That turned out to be a good thing. We ended up getting in around April 18 and 19 and we got a few hundred acres of beans in. Then it rained again and we had to sit out another week. The last week of April we really got rolling and that’s when the weather changed. We started on beans first and wrapped up beans May 3,” Atley said. “The earlier bean crop we planted struggled. It was really wet. I was starting to get nervous. Around 50% of those beans came up in good time but the other half on some clay ground really struggled. It was not 100% emerged until 20 to 28 days after the planting date, but it didn’t take long for those beans to catch up and we were able to recover. By June you couldn’t even tell. They really came on fast after that.”

The Atleys prioritize providing nutrients specifically when the crops need them.

“We fertilize in front of each crop. We feel it is important that the bean crop gets its own food for the year. We’ve played around with 28%, urea, ammonium sulfate, and we could never get over that 100-bushel bump consistently for the beans. With the soil types we have we figured we could produce the nutrients we need ourselves but how do we do it? We started running Vault inoculant on the fully treated seed and then came in with another inoculant with TerraMax in-furrow with straight water and some Fulvic acid and other biologicals with it,” Atley said. “With our soil tests we don’t see a need for 3-18-18 right now. We are trying to get more activity going on and use what we already have there.

“Then, most of our 100+-bushel beans in 2018 all got Cobra. We came in at V1 and we stunted them. We have been playing with that for 3 years now and it has worked every year for us. It is hard to do because it is borderline on killing that bean, but that has paid off really big for us.”

The ample moisture in 2018 led to strong yields, but also significant disease potential.

“We came in with a fungicide at R1 and then at R3 again. We are trying to keep the leaves healthy. We saw great success with that R3 application. To me that is a must-do pass, especially with the really wet August we had last year,” he said. “Going into harvest, we knew the beans were really going to be something special. We had some we felt could have gone higher. We had some lodging issues so we are going to pull down our planting populations even more than we had. This year we are going to be more around that 80,000 to 100,000 range where last year we were around that 100,000 to 130,000 population range. The earliest beans and the later beans were all about the same yields. The winning contest yield we had was the Asgrow 38X8 in Ohio and it was 97+ bushels there per acre. We had a lot of really good beans. We had a few hundred acres over the 100-bushel mark this year with some CROPLAN beans.”

“We try to keep a tight window because you are fighting Mother Nature in the spring and getting a good early stand is really important,” Atley said. “Our yields have actually gone up on corn since we started getting the soybeans planted first and then planting corn. Corn does not like early stress. I cannot put enough in-furrow or 2X2 on to overcome those early cold soil temperatures. If the corn seed is not happy, you are losing yield right from the get go.”

Prior to planting in 2018, Atley applied 180 to 220 pounds of anhydrous in mid-April and then provided an aggressive starter package in the 20-inch rows.

“We use a micropack from Winfield. In the corn starter we are really heavy with the biologicals along with sulfur the Fulvic acid. We are trying to get the best start we can. You are going to make or break a corn crop in that first month. It is very important to get off to a good start,” he said. “We’d rather go into V5 having a 400-bushel potential crop than a 200-bushel crop. Once you have a 200-bushel crop you can’t get that other 200 bushels back. If we can get to harvest around a 300-bushel crop we are tickled to death. We are trying to preserve that yield and the biologicals have become really important for us in-furrow.”

The 2018 May weather cooperated nicely.

“Once we got in the field and planted, the corn came screaming out of the ground. It 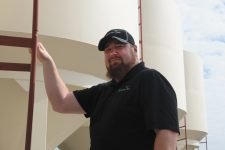 never looked back. The GDUs it was getting were by far the most we have gotten since we have been tracking them,” Atley said. “It felt like we’d just gotten done planting and here we are going out to spray the corn at V5. We’ve had great success with nitrogen and the Max-in Ultra ZMB foliar spray when we come in with a fungicide at a half rate to keep the plant health going. Then that corn is pretty much on its own until around the VT timeframe. We try to come in with a fungicide before we see problems, because if we see problems it is already too late. In 2018 we came back with another shot at VT. We use Brian Fisher who flies it all on for us. We don’t always want to plan for a two-shot because of the expense, but the disease pressure kept getting worse last year. We spilt fields to see if it would pay and it did last year.”

Aside from a 90-degree stretch during pollination, weather conditions were nearly ideal for the 2018 corn crop and hopes were high going into harvest.

“We had our best-ever yield average through the early corn harvest. We were right around that 300-bushel mark with some of our corn until around Oct. 20 when we had a big windstorm come through. We had about 1,000 acres still out and it took a big chunk of that corn and laid it flat. Some of the fields we’d already started to run and there was about a 45-bushel difference pre-wind to post-wind. We were going about every direction we could to get that corn. There were other farmers around with the same challenges. We wrapped up harvest around Nov. 8. We put in a lot of hours once that corn went down because once you get in November you can be in December before you know it,” Atley said. “We ended up around 261 bushels for the farm average. We were on pace for better before the windstorm. On the early corn we were running around a 285-bushel average before the wind came in. Our winning yield in 2018 was CROPLAN 4895 and that came in at 304 bushels in the NCGA yield contest.”

Now looking toward the start of 2019, Atley is excited for some changes in the corn.

“We have made a lot of changes for 2019. We are going to try some new things for the corn program this year. The biggest thing is we are pulling the 6-24-6 and going with straight water in-furrow. We are trying new corn inoculants and Fulvic acid in the starter — things we couldn’t put in before because they didn’t mix well with 6-24-6 or 10-34-0. We are excited to see what that will bring. We’ve tried it and had success with it in the past,” he said. “At V5 we will try some other products and we will try to feed it more this year at the V8 to V10 range to help with the ear length. We try to spoon feed the corn through the year. We can pull back if Mother Nature is not being nice to us. I am also experimenting on a few acres with 10-inch corn this year, but 20-inch is already a pain to walk through. We’ll see how it goes with 10-inch rows.”

“With way the economics are, we have to raise more. As a farm average we want 250 to 275 bushels. At the end of the day, it is all about ROI so that is why we really don’t do a 10-acre plot for a yield contest,” he said. “We want to replicate what we do on every acre at any time.”

By Laura Lindsey, Adapted from C.O.R.N. 2021-04, Ohio State University Extension With funding from the …