The month of February represents the price discovery period for Projected Prices of corn, soybeans, and spring wheat. The Projected Price for soybeans is the average of the February settlement prices for the November futures contract (ZSX2019). The subsequent Harvest Price is the average of the October settlement prices for the same November futures contract. The Projected Price and the Harvest Price are used to identify the guaranteed revenue for revenue based crop insurance products. However, neither price takes into account local cash basis.

The projected price established by RMA for 2019 soybean revenue is $9.54 per bushel. This is down $0.62 per bushel from the 2018 projected price of $10.16 per bushel representing the drop in soybean prices from 2018 to 2019. Price volatility is considered when setting premium levels for insurance products. A higher volatility increases the premium paid by the producer all else equal. Volatility rates are set by averaging the volatility of the most recent five trading days. Soybean volatility has continued decreasing after an increase in 2017 from 2016.

Returns for Ohio soybean producers based on 2019 projected prices

Insurance policies are based on an Actual Production History (APH), which represents a maximum of 10 previous years of yield records for a particular field or enterprise. Since the 2012 crop year, these yields have been adjusted to account for improved crop genetics and current practices. The Federal Crop Insurance Corporation Board approves a trend adjustment factor for corn and soybeans in each county. This factor is equal to the annual increase in yield, and is based on county average yields determined by NASS each year. For the calculations below, a soybean trend adjustment factor of 0.5 bushels is multiplied to the difference in the current year to the base year and then added to the yield of the base year.

As an example, consider a county that has a yield in 2013 of 53 bushels per acre. Using 2017 as the current year the adjustment would be (((2017-2013)*0.5) + 53) for an adjusted yield of 55 bushels per acre. Seeding rates for cost estimates were taken from the 2018 eField Report published by The Ohio State University. The most profitable seeding rate based on a $0.428 per 1000 seeds was used in these cost calculations. Cash rent estimates for each crop reporting district were reported by NASS in 2017.

Ohio producers have the option to select coverage levels from 50% of APH to 85% of APH. Using the Summary of Business operations from the RMA website, the most popular coverage level for Ohio soybean producers is 80%. For this article, it is assumed that an 80% APH coverage level is selected for revenue insurance products. An 80% coverage level means that the projected price is only covered on 80% of yield not the total number of bushels.

When considering all acres within the unit, the uninsured acres have no direct revenue insurance coverage. In this case, it would equal the remaining 20% based on the 80% coverage level. The 2018 Farm Bill signed into law on December 20, 2018 raised the marketing loan rates for covered commodities. These loan rates are often considered a price floor under commodity markets. In the case of soybeans, the marketing loan rate is $6.20 per bushel. If the marketing loan rate is used as the price floor for the remain 20% bushels that are left uncovered then an adjustment can be made to cover all acres within a unit. The $8.87 per bushel represents the complete coverage of all acres.

The $9.54 Projected Price covers cost of production for almost all of Ohio’s crop reporting districts. Two exceptions include Northwest and West Central Ohio, where the majority of Ohio’s soybeans are produced. High cash rents and high seeding rate costs bring cost of production above the projected price in both regions. West Central Ohio compensates a portion of these higher costs with higher yields than all the other districts. Their APH is likely the highest and therefore has the highest absolute value of covered bushels under a revenue policy.

Taking into account all bushels, using the marketing loan rate as a price floor, Central, North Central, Northwest, and West Central Ohio all have costs of production above the guaranteed price established with the RMA Projected Price. In districts where the cost of production remains below the Projected Price of all acres cash rented in relation to yields, are lower than those districts that have costs of production above the Projected Price for all acres. According to the OSU eFields Report, these districts also have lower seeding rates with a lower seed costs. Southeast Ohio had the lowest cost of production, but also represented the smallest amount of covered acres according to the RMA Summary of Business.

The Projected Price used in guarantees for revenue insurance and for premium costs for RMA federally subsidized insurance policies was finalized at the end of February. The $9.54 per bushel Projected Price is $0.62 below the Projected Price of 2018, and the lowest of the prices reported on the RMA webpage going back to 2011. The Harvest Price will be discovered in the month of October and has historically been lower than the Projected Price of the corresponding year. The RMA Projected Price is used by Ohio soybean producers to manage price risk, but it is not the only tool. The marketing loan rate set in the 2018 Farm Bill provides a price floor that is used to calculate insurance revenue guarantees. While several crop reporting districts showed gains over cost of production for soybeans, the crop reporting districts of Northwest, North Central, West Central, and Central are at best meeting costs for all acres given a coverage level of 80% of APH. These districts represent the majority of soybean revenue policies and soybean production for the state. In 2019, these programs are protecting the downside risk for producers as proponents argue they were designed to do. Districts having net returns above cost of production have low production and low insurance coverage. Thus, these insurance programs are providing a risk management tool for Ohio producers. 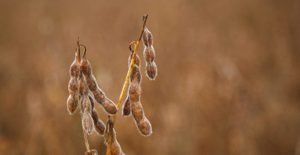