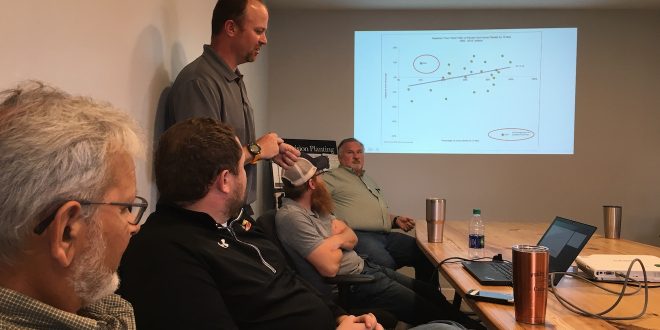 The 2019 planting season continues to be an aggravating one for Ohio growers, though there’s still plenty of time for a good crop ahead, says DEKALB Asgrow Technical Agronomist Roy Ulrich.

“No really big reasons to change anything as far as products or practices until after we get out past Memorial Day. Once we get toward the end of the month, then we can make some changes, but right now just stay the course. Whatever plan you had is still the best plan to put in place,” said Ulrich.

He pointed out how growing degree day requirements for corn actually go down as the planting season rolls along due to corn’s unique adaptation abilities. Soybeans though do require a different tailoring as the planting date gets later, the reason he recommends upping populations by 10,000 per acre for each week after Memorial Day.

Overall, he said don’t be too eager to get out there as a lot of damage can be done in soggy soils.

“If you get out there too early and stuff’s too wet, you can get some really bad sidewall or tillage compaction. There’s no way too really alleviate that after we’ve already done the trip. You need to be patient. Make sure field conditions are fit, because the worst thing you can do is get out there too early and then you’re praying for it to be a wet season and to stay wet,” he said. “Patience is hard this time of year, but patience is what we all need to have.”

Ulrich also detailed concerns about higher populations of Black Cutworm and Armyworm. More in the audio below.

Union County Farmer Fred Yoder was part of the discussion, relating this year to that of 2011.

“Well 2011, that was the year that many people didn’t do a thing until the first week of June and in fact I had said before that that I would never plant in corn again in June because anytime I did with replant situations, it never did pan out. That year I planted all my corn and beans in about the first 10 days of June and by golly we had a lot of sunshine and warm weather in the growing season and we had delayed frost in the fall. It was actually a tremendous year – one of my better years of farming in my 40-some years of farming, so you really can’t discount the fact that things can be made up in time with the right growing degree days and things like that. Again, patience. Let’s not mud it in and wish we had done something different before.”

More from Fred Yoder in the audio below.

Retail sales of all lamb in the U.S. are increasing. “The combination of consumers cooking …