Switching from alfalfa to soybean…Should I inoculate?

Alfalfa stands were negatively affected by this winter’s weather. Some farmers may be converting their alfalfa fields to soybean. Does the soybean seed need to be inoculated?

While there is very little information on this topic, we believe yes. You should inoculate soybean with Rhizobia when converting an alfalfa field to soybean. Here’s why… Both alfalfa and soybean plants have a symbiotic relationship with bacteria in which the bacteria fix nitrogen from the atmosphere into a plant-available form of nitrogen. However, different species are associated with alfalfa and soybean. In soybean, nitrogen fixation is associated with Bradyrhizobium japonicum. While in alfalfa, nitrogen fixation is associated with Sinorhizobium meliloti (also called Ensifer meliloti). The bacteria associated with nitrogen fixation in alfalfa will not form the same association with soybean.
Generally, fields with a history of soybean production have a large population density of Bradyrhizobium japonicum. However, if soybean hasn’t been grown for several years, there is more likely to be a yield response when soybean seed is inoculated.
The previous alfalfa crop will provide some nitrogen to the soybean crop, but this is difficult to quantify. While we know that a previous alfalfa crop can supply nearly all the N needed for corn production, we found no published research studies on uninoculated soybean after alfalfa. Nitrogen mineralization from an organic form (alfalfa residue) to a plant-available form of nitrogen (ammonium or nitrate) is unpredictable. Nitrogen release from organic materials is weather dependent (moisture/temperature) and also depends on the carbon:nitrogen ratio of the material. So, nitrogen release from the alfalfa residue may not coincide with nitrogen uptake by the soybean plant. (And soybeans need a lot of nitrogen! It takes ~290 pounds of N per acre to produce a 60 bushels per acre soybean crop.) [Side note: Applying nitrogen fertilizer does not usually increase soybean yield and is even less likely to be profitable. So even though soybean has a high requirement for nitrogen, please do not apply nitrogen fertilizer.] Inoculant is a relatively cheap input. 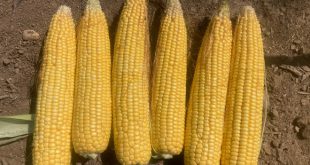 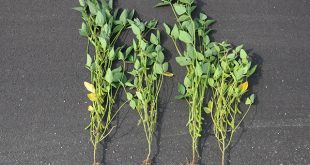