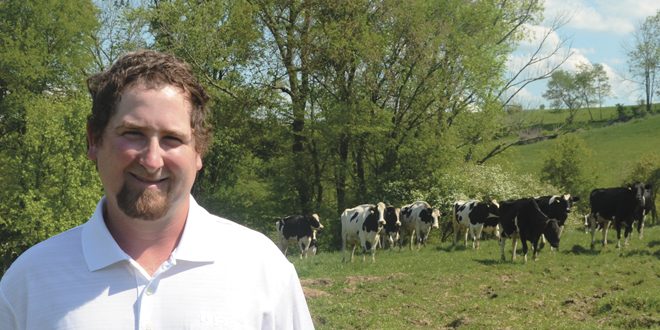 Just milking twice a day, every day, for four hours each time, can take its toll. Then in between the milking bookends of the day, dairy farmers feed calves, care for the cows, grow crops, bale hay, maintain the farm, and manage the land as a part of their duties. And, despite the relentless work schedule and long hours, many dairy farmers have surely suffered some sleepless nights in recent years as they eek by on the thinnest of margins as milk prices have dropped and stayed low.

Four at a time, Devin Cain milks 61 Holstein cows with his father Larry in Belmont County and the budget has been tight on the dairy farm.

“Ever since 2014, it has been tough with milk prices. I think we saw around $23 milk in 2014. Last year it was down in the $14s and averaged in the $16 range. Milk prices are up a little now but it is projected to average around $16 this year too,” Cain said. “We have to scrimp and save wherever we can to make it and we really have to prioritize the projects that have to be done. I’m not sure how bright the future is going to be, but there is going to be a future.”

The small-scale Cain Dairy farm has been able to survive the downturn for a few reasons.

“All of our debt is paid for and all we have to do is pay bills and a little bit of labor. We make our own feed so we don’t have a lot of cost in feeding our cows,” Cain said. “We do have a couple of oil and gas wells. That has helped ease the burden and let us buy new equipment, but we always make the dairy part profitable. If we can’t do that there’s no reason to keep going. I know some guys who are working two jobs to pay for one job. We are not going to do that.”

Cain Dairy is also fortunate that there are enough small dairies in a fairly small area to keep the milk truck coming.

“There are enough farms in the county to fill a load of milk and we are fortunate in our county there are two milk haulers in our area,” Cain said. “If more dairies go out around here then our hauling rates will go up, but with DFA at least we are guaranteed to get our milk picked up and we don’t have to worry about that at night.”

A third part of the formula for economic sustainability on the farm is the low-cost feeding strategy that is heavy on grass pasture. While much of Ohio had a long, wet and muddy stretch since last fall, this winter was a bit more kind in Belmont County.

The pastures are primarily orchardgrass and fescue. The grass is supplemented with some grain. The Cains also chop silage and haylage, and bale some dry hay off around 150 acres. Winter wheat is planted as a cover crop between corn silage plantings, which are rotated in as the hay fields fizzle out. The Cains have been working to gain an advantage by improving crop production efficiency on the farm.

“We are always trying to improve the genetics in the cows and raise better crops. We are looking at more corn hybrids and bumping up the population on the corn planter to get more tonnage. We are putting more priority on the timeliness of the crops for the feed,” Cain said. “If you don’t feed them right there is no reason to milk them.”

Cain has a retired uncle that helps on the farm and his wife is a large animal veterinarian, but the workload is high and the labor supply is slim. They are considering adding milking robots (and the significant investment) to help manage the labor on the farm.

“The biggest challenge, though, is the prices. There’s too much milk out there,” Cain said. “DFA is working with Glanbia Cheese for a cheese plant up in Michigan, which is supposed to help. And, if we get trade with China and Mexico working and get the milk out of the U.S. it will help tremendously.”

Even with the current export challenges, dairy exports have been one bright spot for the sector. According to the U.S. Dairy Export Council, suppliers shipped 186,185 tons of milk powders, cheese, butterfat, whey products, and lactose in March, the most in 7 months, but down 12% from the strong performance of March 2018. Total U.S. exports were worth $538.3 million, up 4%, year-over-year. At the same time, though, sales to China plummeted, with overall March volume just half of what it was a year ago, before retaliatory tariffs hurt U.S. competitiveness.

“In 2018 we eclipsed more than 220 billion pounds of consumption. That is 100 billion pounds more than we sold in 1983. It is frustrating to sit and watch this. What has really changed is that we are no longer a local or regional market — we’re competing in the world. That changes the dynamics for everything. There is a lot of milk and that has driven the price down. We can’t sell our way out of this just in the United States. We’ve got to get after that international market. A real highlight for us right now is that we are expanding our international market share. Over 16% of our production in the U.S. was sold internationally last year and we are on track to getting 20% of U.S. milk production sold in international markets,” Higgins said. “When the dairy farmers realized we were up against this challenge, we invested more in the U.S. Dairy Export Council and challenged them to go overseas and work around barriers. If the tariffs can’t be removed, let’s look for other markets and compete in other parts of the world like southeast Asia and Japan. We continue to work hard on relations in Mexico and China, but we have also found other markets for U.S. dairy products. If we work hard to open doors and introduce products in those countries, we are going to grow exponentially.”

Cheese sales, in particular, have been strong internationally and domestically. According to the U.S. Dairy Export Council, U.S. cheese suppliers moved record volumes this March to an expanding customer base in South Korea, Japan, Southeast Asia, the Middle East/North Africa region and Central America. And per capita cheese consumption has more than doubled domestically.

The domestic markets for fluid milk, though, are an ongoing problem for a number of reasons.

“We have not seen that innovation and aggressive brand marketing we need for fluid milk. We’ve got to find a way to market new fluid milk-based products that meet the needs of this new generation of consumers who want to consume their dairy differently,” Higgins said. “That is what the checkoff program is working on and we need our brand partners to help get that done. Everyone has tightened their belts on dairy farms. It has been too many years in a row with low prices. The hope in all of this is that we are able to harness more consumer sales.”

For the Cains in Belmont County, they are watching exports, and domestic sales, but they are mostly watching that milk check because they plan to keep milking for eight hours a day and finding ways to make ends meet on the dairy. The hours are long and the task is daunting, but it is what they know and love.

“There are other dairy farms in the area that do not have younger generations coming up and there is not much future for some of them,” Cain said. “But with this job I can get on the tractor and be by myself and the cows don’t talk back. There are days I wonder whether we can keep going, but I have a lot of pride as a dairy farmer and it is what I want to do.”

With the great outdoors being a popular destination during the pandemic, it’s important to watch …