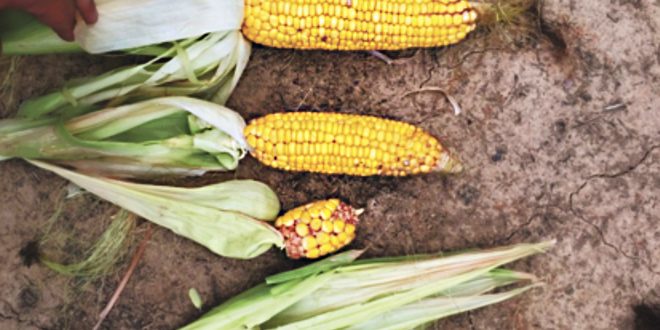 On the bottom is an example of arrested ear development due to glyphosate applied broadcast at V10-V11.

As I am writing this, many corn and soybean acres have yet to be planted throughout the state. However, my hope is that by the time you read this, your crop will have emerged and will be growing vigorously.

One thing that is certain for later planted corn is that the vegetative growth period will be expedited. By now, many of you have been made aware of the research conducted by The Ohio State University and Purdue University which has shown that, on average, a hybrid requires 6.8 GDU’s less per day to reach black layer or physiological maturity when planted after May 1. This is possible because of the accelerated accumulation of heat units or GDU’s. Instead of producing a new leaf every five to seven days prior to the V7 growth stage, later planted corn will more likely produce a new leaf every four to six days within this same period. Corn that is between the V7 and VT growth stage typically produces a new leaf every two to three days, and late-planted corn leaf production will likely occur even quicker.

This is important for several reasons, but primarily for the timely completion of sidedress nitrogen (N) applications as well as post-application herbicide treatments.

Nitrogen is important to corn for several reasons; however, its role in photosynthesis and silk development is critical.

In the process of photosynthesis, chlorophyll absorbs light energy to transform carbon dioxide and water into carbohydrates and oxygen. Chlorophyll is primarily comprised of N. While the process of photosynthesis is key to corn at any planting date, late-planted corn has an increased need to maximize light absorption due to its condensed growing season.

Nitrogen is also a fundamental component to silk development and thus, pollination. Corn begins the rapid N uptake period around the V7 to V8 growth stage and initial silk development occurs at approximately the V10 growth stage. Nitrogen is a vegetative nutrient that helps to drive silk development. Corn plants absorb N from the soil as both ammonium (NH4+) and nitrate (NO3-) ions, but because nitrate N moves freely towards the roots as they absorb water, most N is taken up as nitrate. Because the process of converting ammonium to nitrate can take several weeks, sidedress applications must be made with enough time prior to the rapid N uptake period to ensure adequate soil nitrate N is available for the plant. This is even more important when utilizing anhydrous ammonia, urea, or ammonium sulfate sources of N in sidedress treatments.

While a portion of the labeled height precaution speaks to the ability of getting adequate weed coverage as the corn plant grows taller and develops more leaves, it’s also important to recall what is taking place with the development of the stalk at various growth stages. The number of rows per ear is determined between the V5 and V8 growth stages while the potential number of kernels per row is determined approximately a week before silks emerge. Even hybrids containing herbicide-tolerant traits must still metabolize any post-applied herbicides. Because of this, post-application treatments applied off-label, or too late in the season, have the potential to negatively impact ear size.

Be careful when it comes to deciding whether to utilize growth regulator herbicides (those containing dicamba, Stinger, or 2,4-D) in post-applications as these products have the potential to make corn brittle. As referenced above, late-planted corn will progress through the vegetative growth stages very quickly, making it already more vulnerable to wind or mechanical injury.