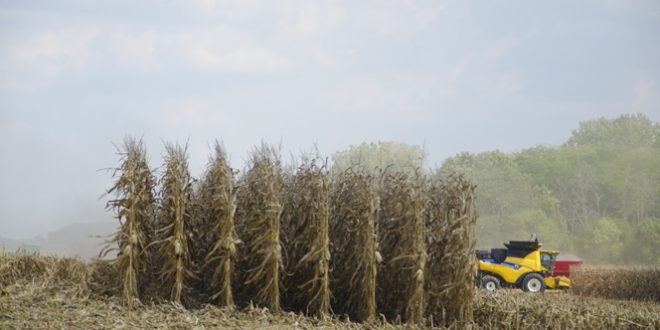 Although the stalks and leaves of a corn plant can be turned into ethanol, the high cost of collecting, storing, and transporting the material has limited its use in producing the fuel.

Ajay Shah, an agricultural engineer with The Ohio State University College of Food, Agricultural, and Environmental Sciences (CFAES) is testing a method that could cut the cost of collecting and delivering corn plant material for making ethanol by up to 20%.

Shah just received a $1 million grant from the U.S. Department of Agriculture to test the effectiveness of a new method that harvests and transports corn plants intact, the ears together with the stalks. Shah’s strategy has the potential to spur the lagging industry of so-called cellulosic ethanol — ethanol produced from the inedible parts of plants, most commonly corn plants in the United States.

“We have an opportunity to significantly cut the cost of taking agricultural waste and turning it into a sustainable fuel,” said Shah, an assistant professor in CFAES’ Department of Food, Agricultural and Biological Engineering (FABE).

Gasoline purchased at the pump includes up to 10% ethanol, which is alcohol produced by fermenting corn kernels. Currently, ethanol produced from the inedible parts of the corn plant, makes up less than 1% of the U.S. ethanol market.

But there’s potential for tremendous growth if there’s a cheaper way to collect and deliver the plant material to turn it into ethanol, said Shah, an assistant professor and head of the BioSystems Analysis Lab at CFAES.

The system still would gather about half of the corn plant, leaving the remaining dry corn stalks in the field to prevent erosion and return organic material and its associated nutrients to the soil.

“It could have a huge economic impact if it’s adopted by the biorefineries,” Shah said of the new strategy for collecting and delivering corn plants with ears and stalks intact.

Through the grant, Shah will work with farm equipment companies to develop machinery that could be used for the system and could eventually be put on the market.

“We’re working on improving the efficiency of everything from harvest to processing at a biorefinery,” Shah said. “We are focused on reducing the cost and environmental impacts of logistics.”

Collecting and delivering the plant material can cost up to $100 per acre, which can account for up to half the cost of producing ethanol with that plant material, Shah said.

The system Shah is testing involves harvesting the corn plant so the ears and a portion of the stalks are not separated in the field but are sent as a single package to the biorefinery. Separating the corn kernels from the rest of the plant requires a combine, which is expensive and currently used in the field only a few months of the year.

If, instead, the farmer were to collect the cobs and stalks at the same time, he or she could then have them baled and stored on the farm or at a centralized storage location. A stationary machine that separates the grain from the rest of the plant could operate throughout the year, maximizing its use.

Additional cost savings can result from the delivery of the bales. Baling the corn plant material has been a challenge because it is difficult to compact into dense bales, resulting in additional costs to transport it. The bed of a truck may be filled before its weight capacity is met. So Shah has been testing various ways to compact and bale the whole corn plant, including the ears with grain, so that the bales are more dense. The more densely packed the bales, the cheaper it is to transport them.

Besides Shah, other CFAES researchers involved in the project are Scott Shearer and Sami Khanal of FABE; Katrina Cornish of FABE and the Department of Horticulture and Crop Science; Steve Culman from the School of Environment and Natural Resources; and Jon Witter from Ohio State ATI. 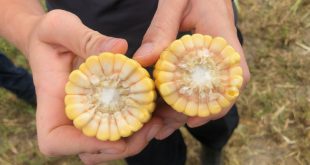 The benefits of late-season scouting

By Roy A. Ulrich, Dekalb and Asgrow Technical Agronomist in Southern Ohio Many of the …