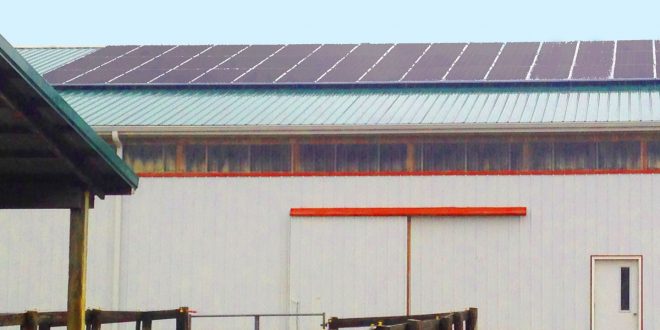 An Ohio solar energy system used to offset electricity use for grain drying.

With all the rain and delayed planting that Ohio farmers have experienced this spring, signing a solar lease has been a very appealing prospect for many farmland owners. While this may be the right decision for a farm, it is very important that the farmland owner understand exactly what he or she is signing. Once an energy developer offers to pay you to enter into an agreement, and you sign that agreement, its terms will be legally binding.

We wanted to highlight some of the important provisions of a solar lease that you as a farmland owner should look for in your solar lease, and understand what they mean. A good solar lease will be very thorough, and include a lot of legalese. It would be a wise decision to consult with an attorney to ensure that your understanding of your solar lease reflects what the documents say.

For now, here are a few provisions to be on the lookout for in your solar lease.

How long does this lease last? Most solar leases last for 20 to 30 years. This is the time during which solar energy is being collected and sold. Solar energy developers like this multi-decade duration because it allows them to use of the solar panels for their expected productive lifespan.

Thirty years is a long time. Many careers are retirement-eligible after that period, and many farms will transition to the next generation in that amount of time. This long of a term is not necessarily a bad thing. It just means that a farmland owner should look back and look ahead. Think back 30 years to 1989. What all has changed on your farm? What would it have looked like to not be able to use this ground for the past 30 years? Now look ahead. What do you expect your needs and those of your family to look like when this lease ends in 2049? Only you can determine if not being able to use your land for that long is a good thing.

How is this lease broken up? We just explained that most solar leases will last for 20 to 30 years, but that clock usually starts ticking once construction has started on the project. Solar energy developers will often reserve a year or two during which they can conduct their final feasibility studies and obtain necessary permits. Some leases structure this pre-construction phase as merely an option phase, meaning that the energy developer will pay a small amount of rent to keep its option alive for that one or two-year period, but it does not necessarily have to commence construction.

Further, toward the end of the term, the energy developer may have written in an option to renew for another 5 or 10 years. These renewals are often structured as a right that the energy developer may exercise merely by giving notice to the landowner. Additionally, in the middle, if there is a natural disaster that puts the operation out of service for any period of time, a solar lease may stop the clock from ticking until the project is operational again and solar energy is being collected.

The important take-away for the phases is being able to know when each phase begins and ends. When all of the different phases are combined, instead of just a 30-year lease, you could be looking at a 42-year agreement. The only way to know how long it could last is to thoroughly read the entire lease.

A description of the premises

Every solar lease will contain a description of the premises. If an entire parcel is being leased, then this part is fairly easy. However, if only a portion of the parcel is being lease, the farmland owner will want to make sure that the lease provides an adequate description so that the leased portion can be easily determined on the ground. Often, this will include a survey and maps. Knowing the boundaries is important because these leases are often exclusive, such that the farmland owner has little or no use or access of the leased land throughout the term.

What does the lease require of you as the farmland owner? Usually private solar energy developers include a non-interference provision, a quiet enjoyment provision, and an exclusivity provision. All combined, these provisions are a promise by the farmland owner to not enter the solar facilities without prior permission, not interfere with the solar facilities, and not allow anyone else to do so for the duration of the term.

Further, solar leases often include a confidentiality provision that courts will enforce as legally binding. These provisions allow the solar energy developer to control the flow of its proprietary information, and also prevent landowners from talking with one another about topics such as rent rates. It is important to understand:

The solar lease may also include a provision about farmland owner improvements. These explain if and when the landowner needs to obtain prior approval of the solar energy developer in order to build a structure or plant something that may interfere with the solar project.

Who is going to mow? Ohio landowners have a legal duty to cut noxious weeds, and a well-drafted lease will cover which party to the lease bears responsibility for keeping the leased land clear. Usually, the solar energy developer will take this responsibility, but it helps to have this in writing.

Cleanup involves a lot of questions. Does the solar lease require the solar energy developer to restore the land to its previous state? If so, how is this measured? Will all stakes and foundations be removed? Will all improvements, like roadways, be removed? How will the solar energy developer guarantee that it will be able to pay for this cleanup in 30 years? Does it post a security, and if so, when? A thorough lease will answer these questions.

It’s not that we saved the fun and best part for last. We just wanted to make sure that compensation is not the first and only thing considered when deciding whether or not to enter into a solar lease. While it certainly is important, some of the issues discussed above must be just as carefully understood.

Another point of compensation to consider is how damages will be calculated for harm to property and crops. When the solar energy developer decides it is time to start construction, its option and easements grant it the right to begin construction even if there is a crop already in the ground. This makes it in a farmland owner’s best interest to have this issue addressed up front. These damages will often be calculated my multiplying the number of acres by the average county yield for that crop by that crop’s commodity future price with the Chicago Board of Trade for a given date. This provides an objective calculation for damages.

The activity we are seeing across Ohio right now with solar reminds us of the early stages of the recent wind and shale energy booms. Some of the biggest regrets that we hear about are from landowners who thought they were getting a better deal than they actually did. Reading through, understanding, and thinking about the lease is an essential part of calculating whether or not the lease being offered is actually a good deal for a farmland owner and his or her family. Don’t be afraid to reach out to your team of professionals in this process. Your attorney, tax professional, Extension educator, and others can be a great resource.