Fungicide applications to corn and soybeans is an important management practice in an “average” year, but what about in 2019, a year

in which many corn and soybean acres were planted much later than normal? To answer this question, it is important to understand the role and function of fungicides.

Leaves serve as a “factory” for the plant, collecting sunlight and carbon dioxide to produce sugars used for grainfill. Healthy leaves produce sufficient amounts of sugars to meet grainfill needs as well as support plant health.

When plant diseases are present, the efficiency of this factory is reduced. If the demand for sugars is greater than what an unhealthy plant can produce, grain yield is reduced and overall plant health will rapidly decline as cannibalization of stalks takes place.

When fungicide applications occur, the leaf “factory” is protected from further disease development for a period of at least two to three weeks. Fungicides don’t necessarily add bushels; rather, fungicides preserve yield potential, protecting against yield loss due to diseases. In addition, fungicides can improve harvest standability by allowing plants to remain healthy and not cannibalize stalks at the end of the season.

The two corn diseases that consistently pose the greatest risk in Ohio are gray leaf spot (GLS) and northern corn leaf blight (NCLB). These diseases overwinter in residue, which provide a new source of infection every year. Other potential diseases include southern rust, when storm systems blow spores from the south, and tar spot, a relatively new disease found in northwest Ohio in 2018. Tar spot can survive in residue and likely will become a disease of increasing importance in Ohio.

When considering fungicide applications to corn, scout fields to get a sense of what is already taking place. Since common pathogens survive in corn residue, no-till systems and corn-on-corn situations will be higher risk areas. In addition, determine the disease ratings of the corn hybrids you have planted, especially for GLS and NCLB. Hybrids with low resistance scores should be prioritized for fungicide applications. Most companies do not yet have scores for tar spot, but your seed supplier may be able to help you with management considerations.

The ideal time to apply fungicides to corn for maximum protection is near tasseling/silking (VT/R1). Carefully read product labels, as the use of adjuvants may cause crop and ear damage. For soybeans, applications at the R3 stage, beginning pod development, will provide the best results.

So, with all that in mind, should fungicide applications be made to late-planted corn? As with many things, the best answer is “it depends.” Late planting means grainfill will extend through September and into October. Disease pressure is expected to be more severe due to moderate temperatures, heavy dews, and plenty of disease inoculum building throughout the season.

In cases where later-planted corn has high yield potential, and especially if susceptible hybrids were planted and disease is already present, fungicide applications at the proper time will be expected to provide a positive economic response both in terms of yield and stalk quality/standability.

In some cases, fungicides result in higher harvest moisture, due to improved plant health preventing premature plant death. Across Pioneer fungicide trials, fungicide resulted in an average grain moisture only 0.39% wetter than untreated. Even if moisture is greater this year due to late maturity of the crop, there are still expected advantages to fungicide applications.

While 2019 continues to provide plenty of challenges for Ohio growers, well-planned fungicide applications should still be considered as part of an overall management plan for both corn and soybeans. 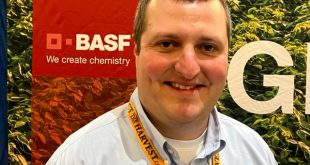